In response to hundreds of protests sparked by the death of George Floyd, a black man who took his last breath under the knee of a police officer, United Methodist pastors preached about the hallowed breath of the Holy Spirit on Pentecost Sunday.

“It was painful and horrific to watch.”

Protests were held in all 50 U.S. states after the death of Floyd and in remembrance of Breonna Taylor, Ahmaud Arbery and thousands of other black and brown people who have been killed. Peaceful in the daytime, many turned violent and ugly during the night, Zabel said.

“Breath is a gift and is precious and sacred. In John 20, Jesus breathed on the disciples and they received the Holy Spirit, which empowered them to move beyond their fear to become a church that is forgiven and is sent into the world to forgive others,” Zabel said.

A crowd of protesters gathers outside the capitol building in Oklahoma City, Okla., May 31 for the Demand Justice Rally organized by Black Lives Matter and other organizations in protest of the death of George Floyd, an unarmed African America man in Minneapolis, Minn., and other killings of African Americans by police. The 99th anniversary of the Tulsa Race Massacre was on May 31. Photo by Meagan Ewton, courtesy of the Oklahoma Conference. 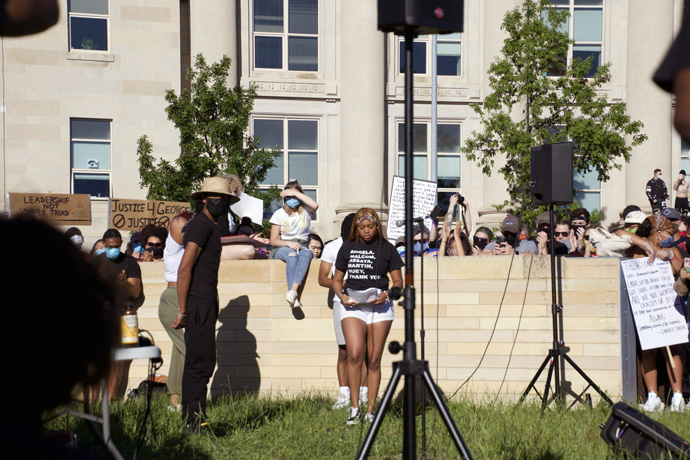 A woman speaks in Des Moines, Iowa, during protests around the U.S. against police brutality and the killing of African Americas like George Floyd. Photo by Kaitlyn E. Winders.

Many United Methodists called for an end to police brutality and participated in peaceful protests in support of Black Lives Matter.

Since protests against police brutality and violence triggered by the deaths of George Floyd, Breonna Taylor and others, United Methodist bishops have been speaking out. Here is a sample of some of their statements and others.

The United Methodist Council of Bishops

Bishop Frank J. Beard, Illinois Great Rivers Conference:
“It is the job of every Christian to serve as conduits of grace, mercy, and love…”

“I do want us, particularly those of us who are the beneficiaries of white privilege, to understand that our African American sisters and brothers are gasping for breath. For 400 years, through slavery, lynching, apartheid (Jim Crow), the civil rights movement, institutionalized racism, and long-delayed police reform, the African American community has been crying out, ‘I can’t breathe.’ And yet, the knee of oppression, white supremacy, and inaction remains. If we see only riots and protests, we are not looking close enough,” said Bishop Bruce Ough, Dakotas-Minnesota Area.

The Council of Bishops said in a statement posted May 30 that the bishops support and embrace a statement by Ough in which he asked the church to address “a pandemic of racism, white supremacy, and white on black or brown violence.”

“As people of faith it is time to take a stand against any and all expressions of racism and white supremacy,” the council said.

The United Methodist Church of St. Paul and St. Andrew in Manhattan organized a “Spread the Flame” Facebook event May 31 that included online and in-person components.

Some members wore masks and spaced out along the sidewalks for a candlelight vigil in front of the church building while others posted photos of themselves holding candles and signs in their own neighborhoods or homes.

The action demonstrated both grief and rage over the death of George Floyd and “for every black life that is devalued, demeaned and desecrated by the white supremacy thriving in our country,” the church’s Facebook announcement said. 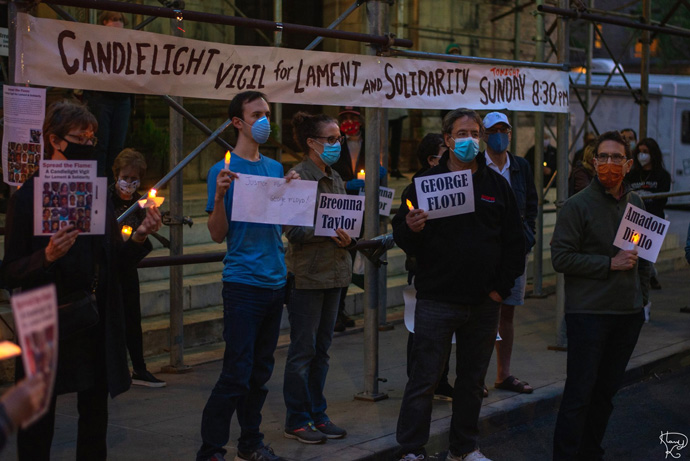 A candlelight vigil outside the Church of St. Paul and St. Andrew in Manhattan drew attention to the recent death of George Floyd in Minneapolis and other African Americans killed in incidents related to their race. New York was among the many U.S. cities experiencing days of protests over racism, inequality and police brutality. Photo by Harry Karpen.
In Lancaster, Pennsylvania, a United Methodist minister was maced by a police officer May 31 during a protest that drew about 200 people.

While an arrest was being made, one of the police officers broke away and started threatening protesters with a can of mace.

“I turned around (and) the police officer sprayed me directly in the face for no reason,” Perkowski said. “It was deliberate. I was blind for about 35 or 40 minutes.”

It was worth paying the price, he said.

“I am a person of privilege,” he said. “I can take my collar off and go home and decide it’s too much of a cost. … But persons of color don’t have that right.” 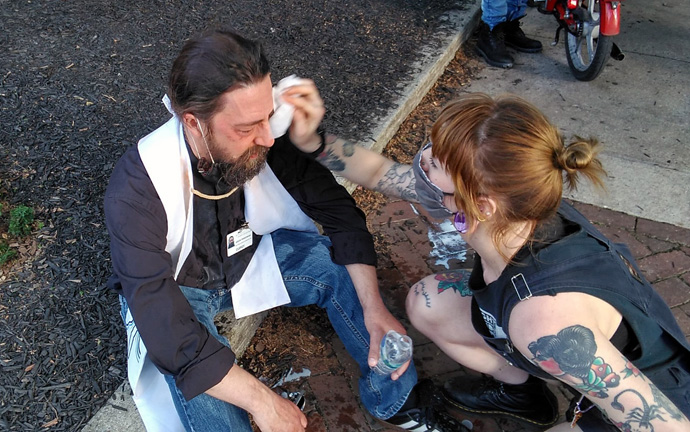 The Rev. Jason Perkowski, a United Methodist pastor, receives assistance after being sprayed with mace during a protest in Lancaster, Pa. Photo courtesy of Jason Perkowski." 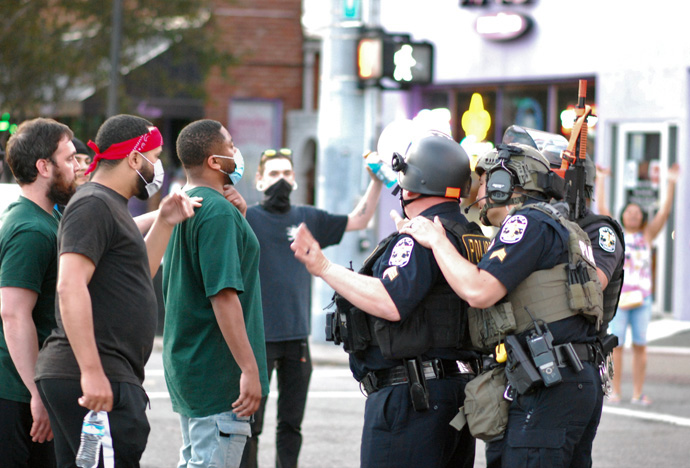 Men talk with police in downtown Louisville, Kentucky, during four days of protests May 28-31 over the killings by police of Breonna Taylor in Louisville and other African Americans. One person was killed and seven injured during the protests in Louisville. Photo by Cathy Bruce, courtesy of the Kentucky Conference.
According to news reports, police officers and National Guard soldiers killed a man while enforcing a curfew in Louisville, Kentucky, where Breonna Taylor was shot dead in her own home during a police raid. Two people were reported dead in Indianapolis, and deaths were recorded in Detroit and Minneapolis.

“I have little left but grief and heartache. Yet, with every ounce of my one hope, I pray we will learn that all cops are not bad, all black men are not thugs, and racism is a disease that must be admitted before it can be cured,” wrote Bishop Leonard E. Fairley, Kentucky Conference.

“Let us rise up and tell the world, the nation, every perpetrator spreading injustice, every perpetrator spreading hatred, death, and violence, that this is not the way. There is still a more excellent way to rise up and tell this divided world and nation that His name is Jesus, bringer of peace and healer with the power of reconciliation and redemptive sacrificial agape (love), as the only true light in darkness,” Fairley wrote. 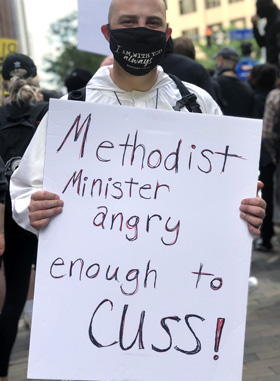 “Advocating for justice is hard work. It’s dirty work. It’s exhausting work. It’s heart-wrenching work,” said Hand, the Pittsburgh District superintendent. “I cannot sit back and watch the horridness of continued brutality of my black and brown siblings. I just can’t and I won’t.”

“As Christ-followers, we are called both to gather in worship, and be sent forth in benediction to stand with and advocate for those in harm’s way,” he said. Smith had recorded his service earlier in the week but added a new call to action in response to the weekend’s events. He ended by asking listeners to give to anti-racist efforts.

He noted the many communications he’d had last week from white clergy, asking what they could do to address racism. The outreach left him hopeful and convinced that God was intervening in the crisis.

“If we could have dealt with racism on our own, it would have been taken care of a long time ago,” Butler said of African Americans. “We need our white brothers and sisters to take up this mantle.”

Louisiana Conference Bishop Cynthia Fierro Harvey, president of the Council of Bishops, said she was joining Missouri Conference Bishop Bob Farr in recommending that United Methodists read the books “White Fragility” by Robin DiAngelo and “How to Be an Antiracist” by Ibram X. Kendi. 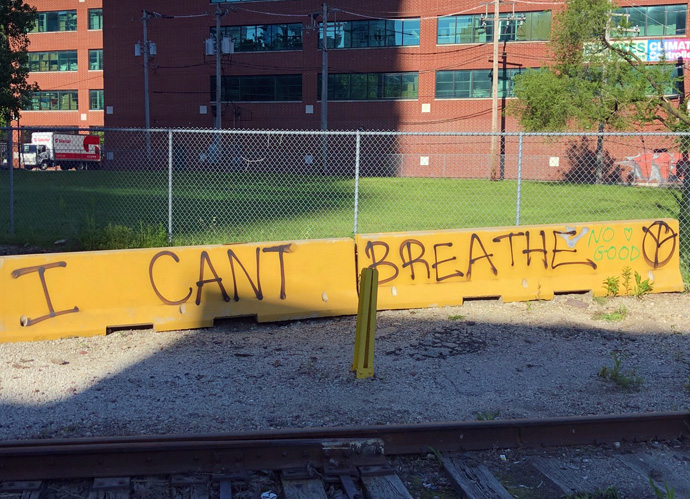 Graffiti in downtown Chicago references the final words of George Floyd, an African American man who died when a police officer in Minneapolis, Minn., knelt on Floyd’s neck for over 8 minutes. The killing of Floyd, Breonna Taylor and others sparked four days and nights of protests against police brutality across the U.S. Photo by Ken Erhman, courtesy of the Northern Illinois Conference.

“Imagine if every pastor, every church staff member, every congregation, every Sunday School class, every small group, every Bible study, read these books, had hard discussions and took real action,” she posted on Facebook. “Could The United Methodist Church be responsible for moving the needle of antiracism in the state of Louisiana?”

The Rev. Ryan Bennett, pastor of Lebanon First United Methodist Church, Tennessee, said his sermon was not on Pentecost because he is doing a series on the Beatitudes. This week was Beatitude 7, “Blessed are the peacemakers, for they will be called children of God.”