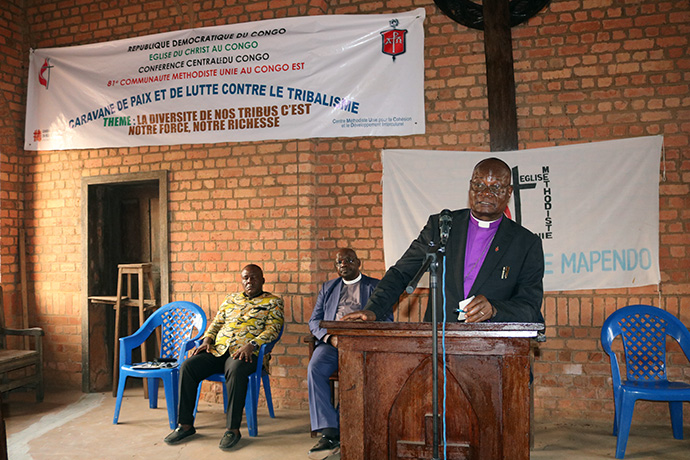 United Methodist Bishop Gabriel Yemba Unda urges the church to help seek the restoration of peace in Eastern Congo during a “peace caravan” in Tunda, Congo. As part of its 100-year celebration, the church organized a caravan of peace to reflect on the Social Principles and encourage peace in the region. Photo By Philippe Kituka Lolonga, UM News.
Key points:

Leaders from the four episcopal areas of the Congo Central Conference gathered to assess the need for tribal peace in the region in order to strengthen evangelism.

More than 500 church clergy and laity participated in a reflection on the United Methodist Social Principles and how they relate to tribalism in the country.

Tribalism is defined as “tribal consciousness and loyalty — especially the exaltation of the tribe above other groups.” There are hundreds of ethnic groups living in Congo and a long history of clashes between them.

The United Methodist Commission on Religion and Race provided financial support for the caravan, according to the Rev. Simon Kombi Ramazani, council on ministries director and Religion and Race coordinator for the East Congo Episcopal Area.

When The United Methodist Church began its work in the country through the Tunda mission, members of two tribes, Tetela and Kusu, were represented in the church.

Now, with the extension of evangelism in the region, members of hundreds of tribes have joined the church, according to Dr. Richard Letshu, lay leader in the Kivu Conference.

The Rev. Bénoît Mahamudi Ngereza, dean of the faculty of theology at the United Methodist University of Kindu, described his experience with the church and its evolution.

“I am from the Songola tribe,” he said. “When I went to Wembonyama to study with my brother, I did not know if I could be accepted. People said that The United Methodist Church was for the Tetela and Kusu tribes.”

However, he completed his university studies and has served as a United Methodist district superintendent.

Today, all tribes are welcomed in The United Methodist Church in Eastern Congo, Ngereza said.

The Rev. Nzimbi Tanda Martin, a member of the Oriental and Equator Conference, was originally from the South Ubangi Province. He said he is proud to belong to a church that does not discriminate because of tribal affiliation.

“I am from Gwa tribe,” he said, “and today I am an ordained pastor in The United Methodist Church.” Initially, his family questioned his decision to become a United Methodist, rather than going to another denomination where his tribe was represented.

The Rev. André Bokondoa Bolikabe, president of the Church of Christ in the Congo, expressed delight in how the denomination respects diversity in its evangelism efforts.

“I make the commitment today,” he said, “to encourage other communities to follow The United Methodist Church.”

Bishop Daniel Onashuyaka Lunge of the Central Congo Episcopal Area encouraged caravan participants to continue the evangelism momentum. Doing so, he said, coincides with the Great Commission in the Gospel of Matthew to go everywhere and make disciples of Jesus Christ.

The episcopal leaders also encouraged caravan participants to promote peace in their areas.

Bishop Gabriel Yemba Unda, president of the College of Bishops in Congo and provincial president of the Church of Christ in Congo in Maniema, said, “The restoration of peace is everyone's business. The church will have to contribute a lot in prayer and awareness on peace in the Congo. For lack of peace, our faithful are undergoing all possible consequences.”

Leaders including Maniema Governor Affani Idrisa Mangala and Abbé Theodore, an adviser to Congo President Felix Tshisekedi Tshilombo, also attended the gathering. The governor pledged his support for The United Methodist Church’s work in restoring peace in the Congo.

“I am ready to give all my support to The United Methodist Church, whenever it needs us, and I congratulate the leaders for their involvement in the search for peace,” he said.

In the days since video was released showing police officers savagely beating Tyre Nichols, United Methodists have joined in grief and prayers for Nichols and his family. They also called for the recognition of Black people’s humanity.
Theology and Education