Bishop Gabriel Yemba Unda, the first United Methodist bishop of the East Congo Episcopal Area, has been elected provincial president of the Church of Christ in Congo in Maniema.

The CCC is a union of 95 Protestant and evangelical Christian denominations in the Democratic Republic of Congo.

Bishop Unda, who also is the moderator of the National Synod of the Church of Christ in Congo, thanked God for his new role.

“Today, the delegates who came from several communities of the Church of Christ in Congo have just given me a new function. I glorify the Lord and thank everyone for the trust placed in my person,” he said.

Unda will preside over various denominations of the Protestant churches in Maniema for the next six years. He succeeds Bishop Joseph Bitingo Lusambya of the 7th Grace Community, who died in April 2021.

“Our joy is to see several communities join us to say that we want Bishop Gabriel Unda Yemba to lead the CCC Maniema as he does with the East Congo United Methodists,” he said. 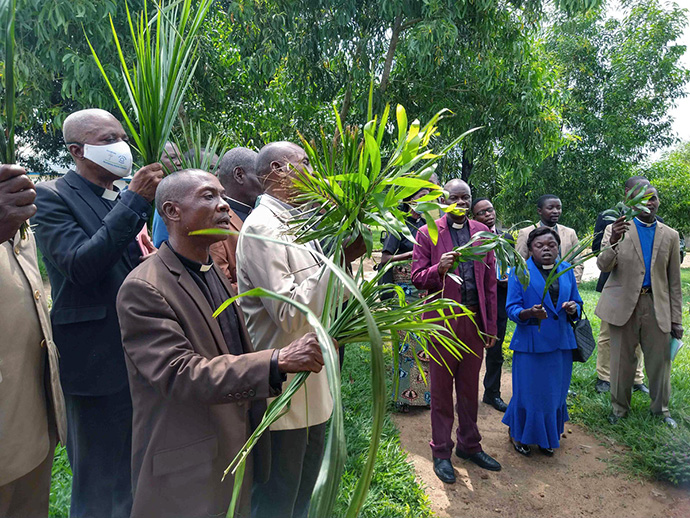 United Methodist pastors in eastern Congo celebrate the election of Bishop Gabriel Yemba Unda as provincial president of the Church of Christ in Congo in Maniema upon his arrival at the episcopal office at Lokole Mission. Photo by Judith Osongo, UM News.

Unda said his first order of business is to find office space for the ecumenical group’s work in the province.

“With the support and effort of all the communities, we will first find the office for the Church of Christ in Congo in the province of Maniema, because together we are stronger,” he said.

Jubilant scenes erupted when the news of Unda’s election was shared on social media. Many pastors and lay people expressed their feelings of joy.

The Rev. Kalema Tambwe, Kindu South District superintendent, said that the election of Unda is an answer of God to the prayers of several clergy of different denominations who demanded change at the head of the Church of Christ in Congo in Maniema.

"(It is) a special day for us Methodists today, here in Kindu in particular and in the whole of the East Congo Episcopal Church,” Tambwe said. “The Lord God of the armies has just answered the prayer of thousands of Methodists and non-Methodists for the change of leadership.”

Meieli Stettler, a German missionary who has long worked in the national office of the Church of Christ in the Congo, welcomed the election of Unda.

“I had read the news of your election, Papa Unda,” said Meieli in her congratulatory message. “You know that we have shared many times about God's faithfulness to his righteous ones and how he knows how to defend the cause of his servants. You have just experienced this once again. I rejoice with you and send you my sincere congratulations for this new proof of the Lord's goodness.”

Dr. Lévi Ngangura Manya, the bishop who presides over the Church of Christ in Congo in the province of South Kivu, also welcomed the results.

“The choice of this man of God is not a coincidence, but God wants to use him to bring something more to this province,” he said.

Dr. Damas Lushima, health coordinator for the church in East Congo, said he has faith that God will accompany Unda in the face of several challenges in this large ecumenical structure in Maniema.

“I am confident that with the experience of Bishop Gabriel Unda and with the help of the Lord, he will do well and we wish him a good mandate,” Lushima said.

“Eastern Congo has and will always need Bishop Unda, because he is a man of evangelization, a unifier, a peacemaker and a man of development,” he said.

The Rev. Clement Kingombe Lutala, Bukavu District superintendent, said the choice of Unda as head of the CCC is proof that United Methodists are respected in the Congo.

“The Church of Christ in Congo has a great extension, because it gathers several Protestant churches which believe in Jesus Christ, and today, it is a pride for the United Methodists to see their leader elected at the head of this great structure," Lutala said.

Francois Lububu, a lay leader in the Eastern Province and Equator Conference, echoed those sentiments.

“The peacemaker, a trainer and a builder is the name we like to call Papa Unda,” he said.

Meieli wished blessings upon the bishop as he takes on his new role.

“May the God you zealously serve use you mightily for the advancement of his kingdom in the Province of Maniema and in the whole Church of Christ in Congo,” she said.

Osongo is the communications director of The United Methodist Church in Eastern Congo and Kituka Lolonga is a communicator for the Kivu Conference.