A century ago, chiefs in what is now the Democratic Republic of Congo requested missionaries to bring evangelism to the Maniema Province, Kibombo Territory and Akunchu Chiefdom on the other side of the Lomami River.

According to the Rev. Antoine Kalema Tambwe, regional historian, predecessors of The United Methodist Church responded.

Participants during the recent celebration included missionaries of the United Methodist Board of Global Ministries, representatives of Connexio Switzerland, and heads of chiefdoms and groups of Kibombo. The Rev. Mahamudi Ngereza Benoit was an officiant.

Bishop Mande Muyombo, North Katanga Episcopal Area, spoke on behalf of the Council of Bishops. He noted that United Methodist involvement started in a tiny village with a small number of faithful and today Eastern Congo has more than a million faithful.

Bishop Daniel Lunge, Central Congo Episcopal Area, said, “Today all the tribes are found in the church in Eastern Congo. For me, it’s a source of pride.” Much remains to be done, he added, especially in evangelization, because the field is still vast. 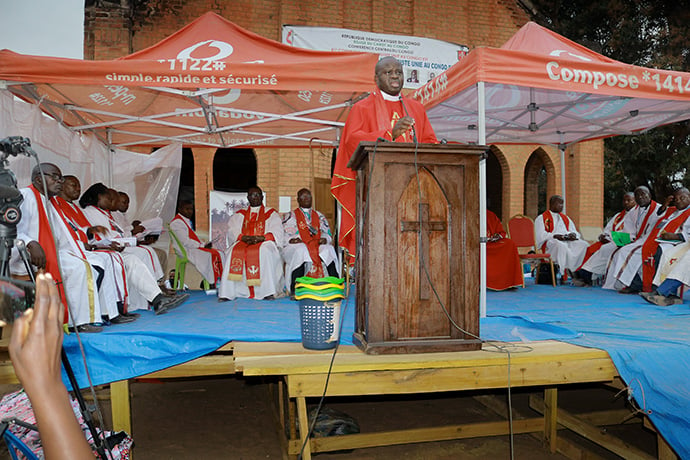 Bishop Mande Muyombo brings greetings from the United Methodist Council of Bishops during the 100th anniversary celebration for the church in Eastern Congo. Photo by Philippe Kituka Lolonga, UM News.
Maniema Province Governor Affani Idrisa Mangala and an advisor of Congo President Felix Tshisekedi Tshilombo participated in a symbolic ribbon cutting at Tunda General Hospital. The hospital was built through the financial support of Global Ministries' Global Health unit. They thanked the United Methodist community in Eastern Congo for their support of health, education and social services.

Customary Chief Lwamba Shoko of the community of Akuchu, Maniema, Kibombo Territory, also expressed appreciation to The United Methodist Church. Because of the church, he said, children of the villages of Kibombo and Kasai earned certificates of primary studies and state diplomas.

Thanks to the first missionaries, he added, “we have intellectuals and university executives who have studied in Methodist schools and who have occupied important functions at the level of the country and the province. It is a pride for us to have governors, doctors, engineers and pastors who have passed through the schools of The United Methodist Church in the Eastern Congo.”

More than 30 clergy and lay leaders were honored for their dedication and loyalty to the service of the church in the region, said Dr. Richard Letshu, who started his primary studies at the Tunda mission and today works with the World Health Organization.

National deputy Prosper Tunda, a descendant of the royal family who welcomed the first missionaries in Tunda, thanked the church for the medals — a sign of recognition — granted to him.

“We must pray unceasingly for the restoration of peace in the Congo in general and in the eastern part in particular,” he said.