Six United Methodists were among 19 civilians killed in a massacre in Mamove that has been blamed on the Allied Democratic Forces, an armed rebel group that operates in Eastern Congo and Uganda.

ADF, a radical Islamist group, is believed to be responsible for the Sept. 27 attack as well as a series of massacres in Eastern Congo since January that involved some other rebel groups.

The dead were memorialized at the Kivu Annual Conference on Oct. 6.

The denomination has four local churches in the Mamove area, said the Rev. Dumas Balaganire, superintendent of the Beni District. He reported on the deaths at the Kivu Annual Conference session underway in Goma Oct. 4-8 at Amani United Methodist Church.

Balaganire said the United Methodists who were killed are: 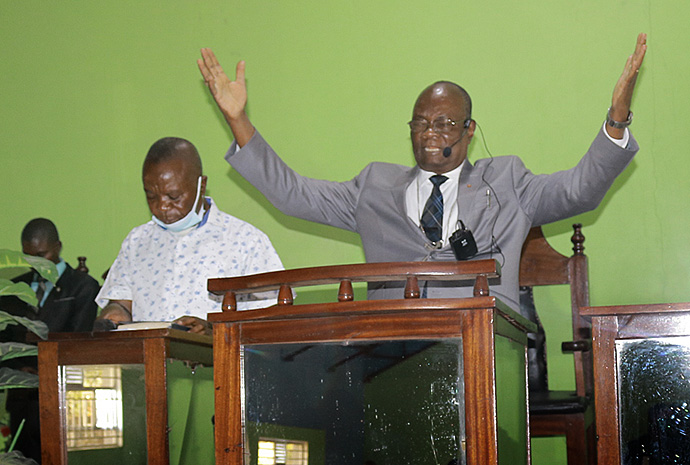 Bishop Gabriel Yemba Unda leads a prayer during the Kivu Annual Conference, meeting in Goma, Congo, for civilians killed in a massacre blamed on the Allied Democratic Forces, an armed rebel group that operates in Eastern Congo and Uganda. Photo by Philippe Kituka Lolong, UM News.

He said they were gathering for a meeting of all United Methodists from the Beni District before the annual conference when they were attacked on the road from Oicha to Beni by ADF forces.

Emile Ulangi, the lay leader and volunteer of the Emergency Office in East Congo Episcopal Area in Beni, asked that justice be done and called for punishment for the perpetrators for their acts.

Ulangi also pleaded for assistance to the widows and orphans of the dead.

East Congo Area Bishop Gabriel Yemba Unda, in his opening address at the Kivu Conference, called on United Methodists to remember those killed in the massacre. He also asked for prayers for those who have died in the COVID-19 pandemic and for Sierra Leone Bishop John K. Yambasu, who died in a car accident last month.

The conference was limited to ordained clergy, delegates and pastors in order to allow social distancing because of COVID-19.

Bishop Unda led the conference in prayer and asked that those of goodwill help the families of the dead. 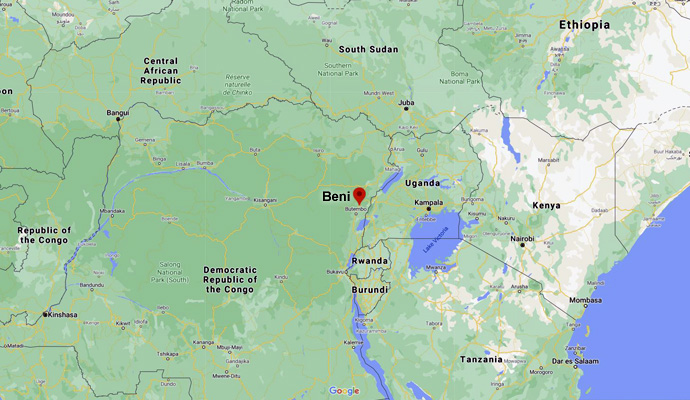 A Google map of Africa shows Beni located to the north of Rwanda and to the west of Lake Victoria in the Democratic Republic of the Congo. The name Beni has been added by its red locator. Image courtesy of Google Maps.

Congo President Félix Tshisekedi Tshilombo had been in Goma this week working on security and development issues in the region.

He spoke on Oct. 6 in Kivu of his hope that Congolese land would be one day be watered by peace rather than the blood of the Congolese.