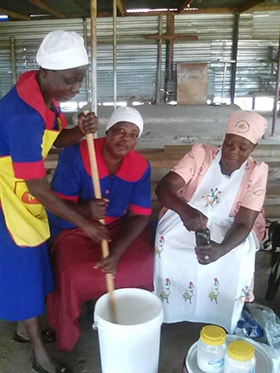 United Methodists in Zimbabwe are looking for new opportunities to help survive the economic hardships facing the country.

Many are turning to entrepreneurship in a tough job market.

“After having been affected by the shrinking job market, I was left hopeless,” said Fungai Chihuri, men’s fellowship chairperson for the Zimbabwe West Conference. “Considering my age and the scarcity of jobs, I resorted to the idea of venturing into projects.

“Currently, I am doing poultry, goats and also my backyard gardening, which helps me to provide vegetables for my family. I can say this has sustained us as my last-born has been able to complete her first degree, even though she is now struggling to get formal employment.”

He said he also is venturing into goat breeding, piggery and cattle breeding.

“As leaders, we have also encouraged many to venture into projects (that) are not capital intensive, but (identifying) the things that are available within their locality, which they can add value or sell as they are,” he said.

With the prices of goods skyrocketing, Fungai said, it has become a nightmare for church members, even those who are still working.

“They require bus fare, school fees, rentals, electricity, medical bills, council bills and to also cater for their families, among all of the other expenses which are expected of a breadwinner,” he said.

The Rev. Lancelot Victor Mukundu, Zimbabwe West Board of Ordained Ministry chair and Nyadire Mission station chair, said pastors have not been spared by the current economic crisis.

“Some have seen themselves engaging into some income-generating projects to sustain themselves and their families,” he said.

“The situation now prevailing does not separate much those in rural and urban settlements. The backyard garden has been the mainstay where people grow green vegetables and supply the local markets that are selling within the community,” he said.

The projects depend on the availability of resources and market demand, he said.

“Some are into market gardening — buying and selling. Some have embarked on forestry and fish farming. But the majority of pastors are still struggling to sustain themselves when they get time, and to those who were fortunate like me to get land through the national land reform program, we have embarked on land utilization for commercial farming activities,” Mukundu said.

He said that some pastors have established microfinance “money rounds” every month to start income-generating projects.

“They make up groups of between six and 12, where they give one some substantial amount of money per month (and) then they monitor what the individual has done with her or his round,” he said.

United Methodist university looks for ways to save money as economic challenges continue to plague the country. Eveline Chikwanah reports.

“Our aim is to create economic freedom, to raise the esteem of our women and make them less dependent on their spouses, communities and even donor support,” Katiyo said.

She said the women’s group has been holding activities each Friday to empower women. They invite guests to train the women to make bar soap, dish soap and petroleum jelly.

“Through the leadership of the Rev. Josephine (Bangure) Hoto, Granary United Methodist Church pastor, we have also started making household cleaning detergents, which we are selling in order to try and increase our income,” Katiyo said.

“We are not purchasing some products since we have the capacity to produce our own pork, cabbages, onion and chicken parts.”

At Africa University, officials are adapting to the changing fiscal environment by looking at ways to operate more efficiently.

“We are currently using generators, which have become a huge cost driver,” said Stephene Chikozho, director of advancement and public affairs at the United Methodist university. “However, we are working on installing a solar plant that can provide off-the-grid energy for the whole campus within the next 12 months.”

He said through empowerment programs being spearheaded by United Methodist church groups, many members are able to produce household goods for extra income or for use for their families.

He said pastors can help members navigate the challenges they are facing.

“Pastors are being called upon to preach sermons of hope such that members look into the future with a positive attitude,” he said.