The churches are close to the school and many members of their congregations are part of the student body or teachers or administrators, said the Rev. Mark Feldmeir, senior pastor of St. Andrew.

Both churches held prayer vigils May 8 to offer comfort to the hurting world orbiting around them.

News reports said two students entered the school with guns hidden in a guitar case. Three students tackled the shooter, and one of those students, 18-year-old Kendrick Castillo, was killed. Another student who confronted the shooter is a member of St. Andrew. He was shot but is back home. Seven others were wounded.

“It was a healing moment for the community, but we’re all a bit emotionally taxed,” Feldmeir said.

He said the Castillo family and the young member of the congregation who had been shot attended the vigil. 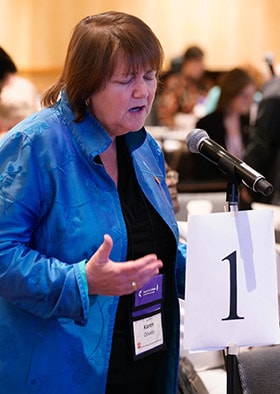 Bishop Karen Oliveto wrote a letter to her “siblings in the Mountain Sky Conference.”

“I give thanks to God for the witness of St. Luke’s and St. Andrew United Methodist churches and for the ways they became waystations of comfort for the grieving and relief for the responders. The pastoral teams and lay members were the arms of Christ as they embraced scared youth and frantic parents. They were vessels of God’s abiding, steadfast presence throughout the day and into the night, and continue to be a place of prayer, solace and safety today.”

The day after the shooting, the Rev. Jessica Rooks from St. Luke’s talked about the connections between the church and the school.

“The weather is cloudy and rainy and gray, and is probably a good metaphor for what is going on in the church and the community,” she said. “There are lots of questions, all the normal questions that follow these events. There are connections in all sorts of ways to teachers and students (in the church).”

The parking lot at St. Luke’s became a staging ground for frantic parents trying to find out what had happened. St. Andrew was used as the county crisis center the day after the shootings.

Feldmeir said he spent Tuesday and Wednesday trying to reach out to all the families that he knew are connected with the school. He said there were several hundred people on the church campus providing counseling for students and administrators as well as police officers who were using some of the rooms to conduct interviews.

“It has been one of those experiences where everything is happening all at once. During the planning (of the vigil), we just didn’t know which of our kids were involved — if we would be doing funerals instead of vigils.”

Another one of the boys who tackled the shooter is a member of St. Andrew, Feldmeir said. He was wounded but is expected to be OK.

Feldmeir also said one of the families in the church was close friends with Castillo. “There is pretty deep grief there,” he said.

The first step is giving people space to express their emotions, he said. “Lots of tears and hugs in hallways and rooms here,” he said Wednesday afternoon.

But Feldmeir said he has found comfort from United Methodists across the country.

“It has been encouraging hearing from people from all over the country, colleagues and United Methodists who are sending their love, support and prayer. It is a reminder of the value of our connection. Given these fragile times in our denomination, (it’s) just one more reminder of how important it is to be connected and remain connected.”

The United Methodist Church continues to be part of negotiations in the Boy Scouts of America bankruptcy, but another religious group has agreed to pay $250 million to a fund for victims of Scouting-related sex abuse.
Theology and Education

The chaotic scene as people fled Afghanistan while the Taliban took over doesn’t mean that United Methodists are through trying to help there.
Local Church