More than 500 families affected by severe flooding in April received much needed food and other assistance from the United Methodist Committee on Relief.

The aid comes as many are still homeless and suffering from malaria and malnutrition, said Simon Kombi Ramazani, director of connectional ministries for the church in East Congo.

Ramazani said many of the flood survivors are members of New Francophone Jerusalem and Uvira Swahiliphone United Methodist churches.

According to the United Nations Refugee Agency, more than 80,000 people have been affected by flooding in the South Kivu province, with some 12,500 sheltering in local churches and schools.

Jean Tshomba, coordinator of UMCOR’s disaster management office in eastern Congo, said he saw firsthand the challenges facing those who lost their homes.

“The United Methodist Church via its partner UMCOR has not folded its arms towards hearing these cries of distress from the population of Uvira,” he said.

Donations can be made through UMCOR's International Disaster Response Advance #982450. Money from this fund is used to respond to disasters around the world.

Additionally, the money is helping to equip several small health facilities in the region treating large numbers of cholera patients because of the floods.

Christine Pimbi, a Uvira resident and volunteer with the church’s disaster management team, said that with COVID-19 restrictions lifting and schools and churches resuming, “families are encountering enormous difficulties for their survival, especially those who lost their homes.”

The mayor of Uvira, Kiza Mweyato, applauded The United Methodist Church for its act of charity and said he was grateful that the church did not limit its aid to United Methodists only.

Ana Nyasile, whose husband died in the floods, echoed those sentiments.

“The volunteers found me in the site with my five children and registered me to receive food today when I am not even a member of The United Methodist Church,” she said.

He said additional aid is necessary and the disaster management office continues to work with UMCOR, the Congolese government and humanitarian groups to determine the most urgent needs, noting that there are still people living in inhumane conditions.

Dr. Damas Lushima, health coordinator for the church in East Congo, said the UMCOR grant allowed the health board to equip six health facilities with medical supplies to treat cholera. The board also organized training for community leaders and healthcare providers to help prevent the waterborne disease in the community. 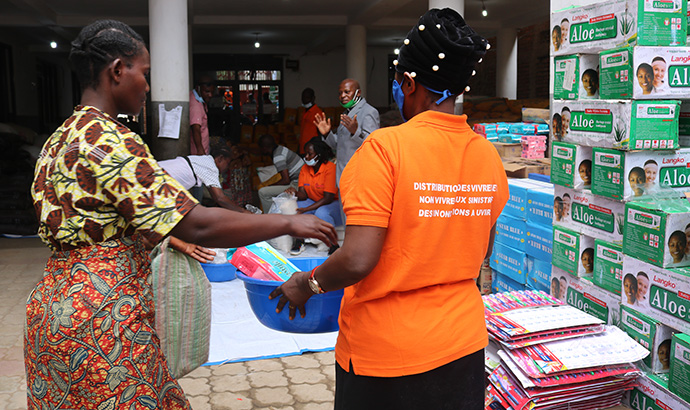 Ana Nyasile, who lost her husband during the recent floods in Uvira, Congo, receives food and other assistance from The United Methodist Church in East Congo through a grant from the United Methodist Committee on Relief. Photo by Philippe Kituka Lolonga, UM News.

“After some intervention, cases of cholera have gradually diminished,” Lushima said. He added that the church will need to continue working on cholera prevention education.

Following the floods, more than 120,000 cases of malaria have been reported in the Uvira health zone, he said, adding that 47% of those are children under 5 years old.

He said the hospital needs mosquito nets and medicine to distribute to malaria patients and clean drinking water for those staying in shelters.

During his address to the eighth session of the Kivu Conference held in Goma in October, Bishop Gabriel Yemba Unda thanked UMCOR for its support for the flood victims.

He said he is concerned that the floods destroyed several churches in Fizi, Uvira and Bunyakiri, leaving the faithful praying in the open.

“When I read the reports of the (district superintendents), I understood that we encountered several difficulties during this year with the pandemic of COVID-19 and these floods,” he said.

He urged the faithful to mobilize together to overcome these difficulties and participate effectively in the reconstruction of the church.

Pastor says it’s time to move beyond binary thinking about abortion and have a broader conversation.
Global Health