• Partnership that began with Volunteers in Mission team from Pennsylvania enriches lives in northeastern Zimbabwe.

• Some 50 teams have returned to Nyadire United Methodist Mission, with completed and in-progress projects and programs valued at more than $5.5 million.

• Projects include the construction and rehabilitation of five rural health clinics.

The Nyadire Connection, a faith-based, nonprofit organization that has supported the Nyadire United Methodist Mission since 2006, is celebrating 15 years of ministry in northeastern Zimbabwe. TNC was initiated by an 18-member Volunteers in Mission team from Pittsburgh.

“Over these 15 years,” said Drew Harvey, TNC chair, “perhaps 50 teams have returned to Nyadire, and a long list of projects and programs, valued at more than $5.5 million, were completed or are in progress.

“There is a long list of tangible items,” he continued, “such as the rehabilitation of Nyadire’s water-reticulation system, construction of new rural health clinics, provision of vehicles and medical equipment, solar installations, the ongoing drug supply to the hospital pharmacy and vision testing and eyeglasses for perhaps 10,000 people.”

But new relationships, spiritual growth and the impact on individual lives form the foundation of TNC, Harvey said. Hundreds of individuals and congregations assist the ministry.

“Today we are proud owners of five state-of-the-art clinics at Dindi, Mashambanhaka, Dendera, Nyahuku and Chikwizo and many other activities which transformed our lives,” he said. “When people talk of health facilities in Mashonaland East Province, the story will not be complete without mentioning these clinics and Nyadire Mission Hospital.”

Brandina Chikango, 53, scoops water for her family from a shallow hole in the nearly dry bed of the Nyahuku River in Kotwa, Zimbabwe. Photo by Kudzai Chingwe, UM News.

Dr. Larry Tanyanyiwa, medical superintendent, said he is proud of the partnership with TNC and grateful for support of the 175-bed hospital and its six associated rural clinics.

“My work has been made much easier during these trying times,” he said, “when the economy of Zimbabwe is struggling, and COVID-19 is a reign of terror.” He noted that TNC paid monthly allowances to doctors, provided medical supplies to the hospital and strengthened programs to empower girls.

“Through their support, they have set high standards in health services with no match from within the province,” he said.

“The clinics are outshining most in the province,” said Shakespeare Kahuyu, a community nurse at Mutawatawa District Hospital. “The accommodation, waiting mothers’ shelter and kitchens are of modern standards and spacious.” Kahuya said nurses aspire to work at Mashambanhaka and Dindi because of good infrastructure, running water and electricity.

“Our wish,” he said, “is for the province to have all six health facilities improved to such a level. When every clinic is improved, there will be more nurses, improved efficiency and improved disease management.” 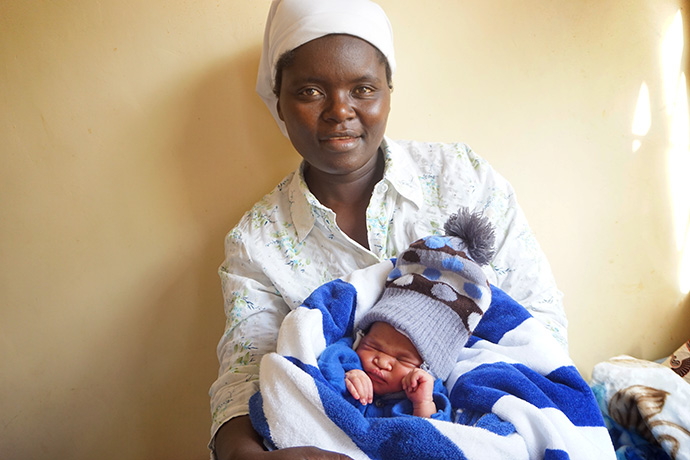 The fifth clinic renovation is near completion. Harvey attributes the success of the projects to the strong partnerships that have been formed over the past 15 years.

“We believe the projects have been successful in large part due to the excellent, local construction management and our effective working relationship with The United Methodist Church leadership in Zimbabwe. As a result, the clinics have been essentially completed on schedule and on budget.”

‘We feel at home’

“Dindi is located in a very remote, rural, malaria-prone area,” Marembo said, “which has high HIV/AIDS and sexually transmitted infection prevalence. HIV counseling could not be done professionally and confidentially due to limited space.”

Primrose Chidziva, sister in charge of the Dendera clinic, said, “Today we boast of the best waiting mothers’ shelter in the district, with an 18-bed capacity. We have an influx of expecting mothers coming from outside our catchment area due to the availability of this facility.

“The facility has reduced home deliveries and lowered the neonatal mortality rate,” she added. 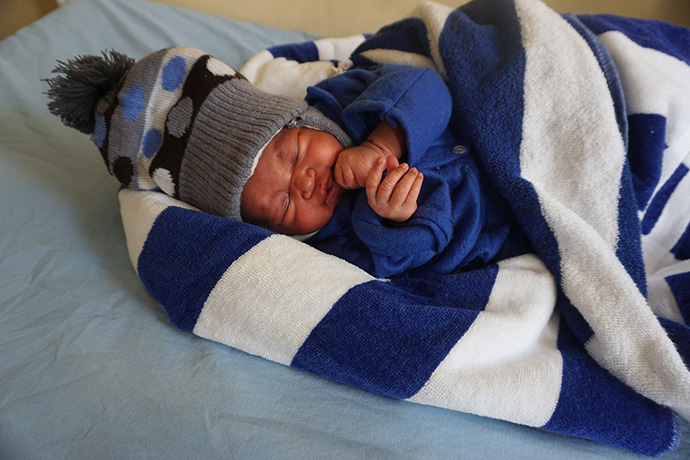 Monica Chimuriwo is expecting her fourth child. “When we are here, we feel at home,” she said. “The care and support are excellent.”

Felix Kaseke, nurse in charge of the Chikwizo clinic, is grateful for improved drug-storage capabilities. “Today,” he said, “we are proud owners of two big rooms, well-ventilated for drugs only, and a refrigerator for vaccines.”

To learn more about the Nyadire Connection and Home of Hope, or to become a sponsor for a child, visit http://www.nyadire.org.

“Failure to have them would cause water and airborne diseases,” he said. “TNC was on the spot as they drilled a borehole, equipped it with the solar-powered pumping system and installed water tanks to provide running water to the clinic. An incinerator was also constructed for waste disposal.”

In addition to the clinic work, TNC provided a school relief program during the pandemic. Every student at 21 schools got hand sanitizer, fabric for face masks and stationery. The schools also received white boards to help with remote learning.

Lovemore Muviza, Manhemba Primary School headmaster, said TNC also intervened when heavy winds blew off the roof of a four-classroom block. “They gave us a donation of $1,700,” he said, “which we used to buy roofing materials for two blocks.”

Students with special needs were not left behind, said Shipikai Mushapaidze, who teaches at Nyadire Primary School. The department was given 20 sewing machines to develop students’ skills.

“We are glad to TNC for considering our plight in developing our skills,” said Michelle Geni, 18. “It is something no one will take away from us.” 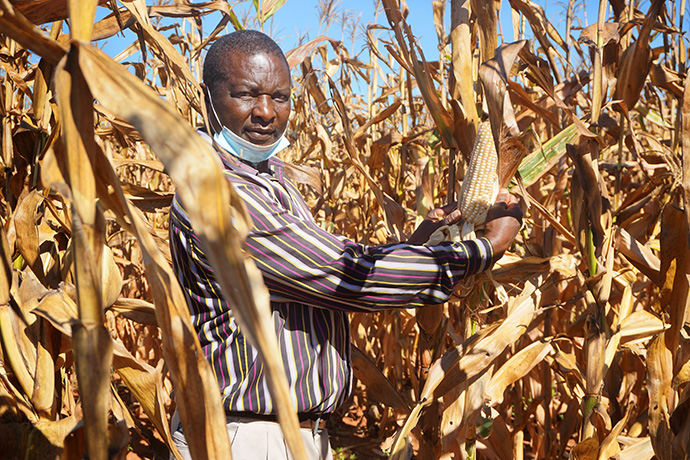 “During the pandemic,” Mukundu said, “420 people from Nyadire Mission — pastors and workers at the six United Methodist clinics — received food bundles. The situation was life threatening, but TNC swiftly intervened and rescued us.”

Harvey said supporters of The Nyadire Connection donated more than $100,000, which allowed the group to fund food purchases for 11 months.

Pastor Patrick Njangu, Chikwizo clinic station chair, recalled, “Everything was grounded. We could not visit the shops willy-nilly due to lockdown. 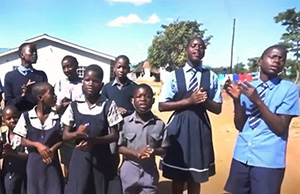 “Now we have received good rains, and we have a bumper harvest. We thank God for that.”

One of TNC’s greatest achievements, Harvey said, is the Home of Hope Orphanage.

“Priority support,” he explained, “has been to provision school fees and backpacks each year to more than 400 students, scholarships, support to the hearing impaired, more than 20 ocean containers filled with Nyadire-requested items, food bundles in response to hunger and much more.”

Kelvin Magirazi, 16, wrote a poem about his experience at the orphanage. “Once upon a time,” he said, “we were in the streets, but there we are in a home, playing with others and feasting, excited about tomorrow. As the less privileged, you have raised us from being underprivileged to the level of the privileged, leaving us feeling overprivileged.”

Emmanuel Chiimba, orphanage administrator, said the Home of Hope was a joint project of TNC and The United Methodist Church in Finland.

The church in Finland constructed the infrastructure and fenced the area, partly with support from the government, while TNC funded numerous projects to sustain the home, he said.

The home, which currently houses 19 children, has a capacity of 60.

The agriculture department provides enough food for orphanage consumption, plus excess to sell. “Through the agriculture project,” he said, “children are gaining knowledge and life skills to be productive.” 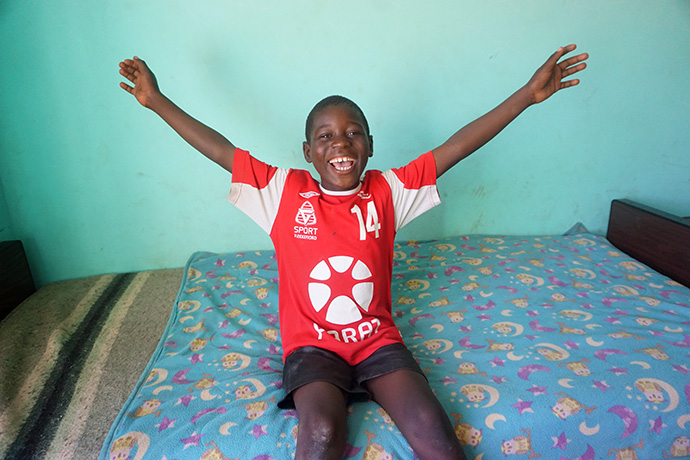 After spending her childhood in the orphanage, Beauty Tsinzi, 19, is embarking on her adult life.

“I did my primary, secondary and tertiary education at this place,” she said. “Now I am a proud holder of a certificate in tourism and hospitality.

“I am now a young adult, considered to be mature and ready to join my new family for the first time. God willing, I will be self-sustaining through the knowledge and skills I gained.”

TNC anticipates many more years of ministry in Zimbabwe.

“Possibilities include development of Nyadire’s agriculture (programs), expanded use of solar (power) and continued efforts toward sustainability,” Harvey said.

“We will work together with Nyadire and the Zimbabwe United Methodist Church to review our partnership and make plans for the future.”

Sharing from their abundance, the Mukandis of Bwanya United Methodist Church give clothing and food baskets to people from six congregations.
Faith Stories

At 84, a retired United Methodist pastor finds the lessons he's learned by running marathons can be applied to life.