As work wound down and leisure time began for most Americans at the start of the Labor Day weekend, more than 100 Texas clergy and laity, many of them United Methodists, walked across the bridge from Brownsville, Texas, to Matamoros, Mexico.

There, for two sweltering hours on Friday afternoon, Aug. 30, they visited with Central Americans and others seeking asylum in the U.S., but being kept in Mexico as their applications are considered.

The Texas clergy and laity returned with stories of hunger, thirst and generally abject conditions, including fear of drug cartels that menace Matamoras and other Mexican border cities.

“They’re just as trapped there as they would be at a detention facility,” said the Rev. Owen Ross, director of church development for the North Texas Conference of The United Methodist Church, and an organizer of the trip. “Only difference is, at a detention facility they’d get food and perhaps a bath sometimes, and they would be in the shade. And, most importantly, they wouldn’t have to worry about the cartels.”

The group went to learn about and to put a spotlight on what’s formally called the Migrant Protection Protocols but is better known as the “remain in Mexico” policy of the Trump Administration.

Some of the clergy didn’t wait till they were back in their pulpits, using social media and interviews to share what they’d seen and calling on other Christians to join them in protest.

“It’s a moral imperative,” said the Rev. Sheron Patterson, pastor of Hamilton Park United Methodist Church in Dallas. “The church has to stand up.” 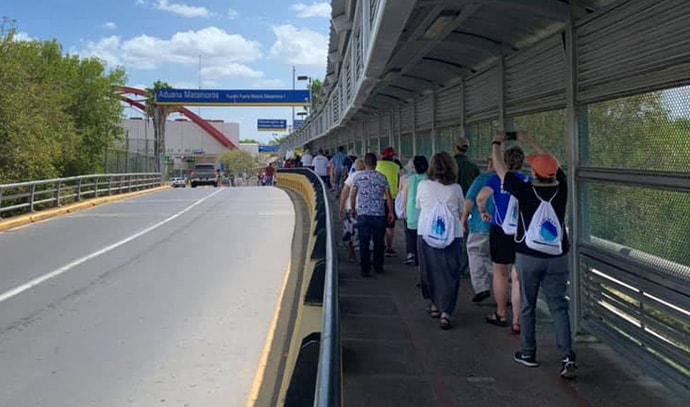 Texas clergy and laity, including many United Methodists, cross the bridge from Brownsville, Texas, to Matamoros, Mexico. The group of more than 100 visited and prayed with Central Americans and others seeking asylum in the U.S., but being kept in Mexico while their cases proceed. Photo courtesy of Texas Impact.

The border trip grew out of conversations between Ross, who for 15 years led a Hispanic United Methodist church in Dallas and served with the Peace Corps in Ecuador, and the Rev. Steve Miller, founder of the U.S. Christian Leadership Organization and associate pastor of a Baptist church.

The two had known each other from growing up in Henderson, Texas, and had lately been having regular talks about what Christians can do to advance racial reconciliation. That led them to the subject of immigration, and to Texas Impact, a longtime, Austin-based interfaith nonprofit that lobbies on social issues.

Texas Impact has a “Courts & Ports” program, supported by the North Texas Conference, which brings small groups to the border to monitor hearings for asylum seekers.

Ross, Miller and Bee Morehead, executive director of Texas Impact, collaborated on creating a Labor Day Weekend trip that would work for a much bigger group and focus on the asylum seekers being kept across the border in Matamoros.

The Rev. Larry Duggins, a United Methodist elder and executive director of the Missional Wisdom Foundation, holds a child from Honduras during a visit to Matamoros, Mexico. Duggins was part of an ecumenical group that went to the border out of concern about a U.S. policy requiring some asylum seekers to remain in Mexico as their cases are considered. Photo Courtesy of Texas Impact.

Thirty United Methodists from the North Texas, Central Texas, Rio Texas and Texas conferences signed up. Some, like Ross and Patterson, traveled 500 miles from Dallas by charter bus. A broad range of other denominations from across Texas took part.

They emerged with a clear goal.

“An immediate end to the wait in Mexico policy,” Ross said. “That is cruel and unusual, putting children and families in places that our State Department says are in harm’s way.”

President Donald Trump was elected in 2016 after promising to build a wall across the U.S.-Mexican border as part of a tougher approach to immigration.

The Migrant Protection Protocols initiative is among his administration’s more recent efforts, and it requires thousands of asylum seekers to remain in Mexico for the duration of their immigration proceedings.

The Department of Homeland Security, in an official statement explaining the action, notes that in fiscal year 2017 more than 90,000 families from Honduras, El Salvador and Guatemala — sometimes called the “Northern Triangle” — were apprehended at the border. The agency also says 99 percent of those remain in the U.S., due to a nearly 800,000-case backlog of asylum cases.

“In fact, approximately 9 out of 10 asylum claims from Northern Triangle countries are ultimately found non-meritorious by federal immigration judges,” the agency states. “Because of the court backlog and the impact of outdated laws and misguided court decisions, many of these individuals have disappeared into the country before a judge denies their claim and simply become fugitives.”

“The Migration Protection Protocols will provide a safer and more orderly process that will discourage individuals from attempting illegal entry and making false claims to stay in the U.S., and allow more resources to be dedicated to individuals who legitimately qualify for asylum,” the Department of Homeland Security statement says.

But the Texas church group sees things differently — noting the extortion-related violence the asylum seekers say they face in their home countries — and those claims are backed up by human rights groups and news accounts.

“We have people fleeing violence in Central America. They’re fleeing the prospect of death and they’re coming to this country to live, and we’re shutting the door in their face,” Miller said.

The Texas group received briefings from lawyers and human rights advocates during meetings on the Texas side of the border. While in Matamoros, Mexico, they broke into small groups, each with a Spanish-speaking Texan who could translate as they met and prayed with asylum seekers from Honduras, Guatemala, El Salvador, Nicaragua and Cuba.

Some are living in tents, but others are less well situated, and conditions overall are grim, the Texas group reported.

“There was a lady with a milk jug, which she was filling full of river water,” Ross said. “We saw her bathing her naked child on a picnic table in the park. Yet another lady showed us where she had a rash she got from bathing in the polluted (Rio Grande) river.”

Kay Schecht, a member of Plymouth Park United Methodist Church in Irving, Texas, put into writing what she saw and heard in Matamoros.

“All refugees stated they are hungry and thirsty,” she wrote. “We were there in late afternoon and early evening and the only food the immigrants had received by that time was a slight breakfast. If they receive a dinner, it will be a small peanut butter and jelly sandwich.”

The State Department warns U.S. citizens against traveling to parts of Mexico, and currently has a “do not travel” advisory in place for Matamoros and the surrounding state of Tamaulipas, due to high levels of violence and gang activity.

“There’s a huge danger to being there,” Ross said. 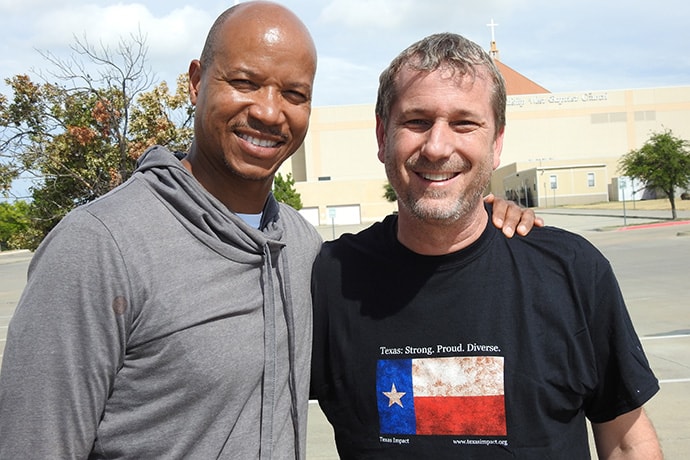 The Revs. Steve Miller (left) and Owen Ross are friends from growing up in Henderson, Texas, and helped organize a Labor Day Weekend trip by Texas clergy and laity to the Texas-Mexico border. Photo by Sam Hodges, UM News.

Ross and some other group members will be traveling to Washington later this month to lobby members of Congress to end the remain in Mexico policy.

The United Methodist Board of Church and Society will be coordinating for United Methodists making that trip, said Rebecca Cole, the agency’s director of grassroots organizing.

She added that the Texas group’s work is consistent with United Methodists’ three priorities in immigration: welcoming the stranger, human rights and keeping families together.

Cole said the group members’ presence in Washington could make a difference.

“Often, members of Congress don’t have all the stories, or haven’t necessarily seen what clergy see on the ground,” she said.

Meanwhile, the Rev. Stephanie Evelyn McKellar of the North Texas-based Missional Wisdom Foundation already has used her website to share photos from the trip and poems she was moved to write.

And the Rev. Eric Folkerth, pastor of Dallas’ Kessler Park United Methodist Church, took to his blog to describe the border visit and ask his readers to protest to members of Congress.