On Oct. 26, Walter Wallace Jr. became a statistic  — another name to add to a long list of Black people shot and killed by police.

Wallace, a Philadelphia resident, was having a mental health crisis and his family called for emergency help. His mother, begging the police not to shoot, watched her son gunned down in the street. His shooting prompted protests in a year already punctuated by tears and cries for justice.

In the aftermath of the shooting, Philadelphia Area Bishop Peggy A. Johnson called on people of God to pray for justice and peace and comfort for the family. But she also took action, organizing a Zoom call with pastors and laity to come up with concrete steps to move them to dismantling racism.

United Methodist conferences around the world are responding to the calls for anti-racism and justice through prayers, training, education on white supremacy and investing in the lives of people of color.

United Methodists in Greater New Jersey are embarking on a “Journey of Hope” with the goal of ending the sin of racism in their conference. 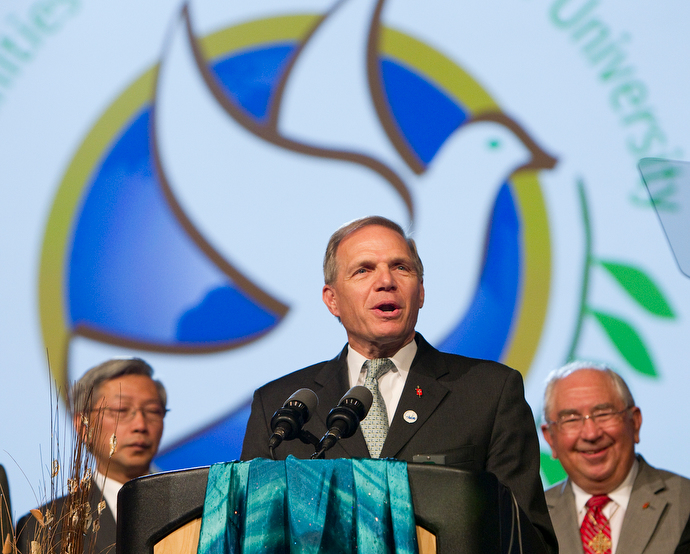 Bishop John R. Schol (center) helps recognize the Community of Shalom program during the 2012 United Methodist General Conference in Tampa, Fla. As a pastor and a director for the United Methodist Board of Global Ministries, Schol was present at the 1992 General Conference when the body stopped the planned business and took a day out for prayer, fasting and conversation over the sin of racism. File photo by Mike DuBose, UM News.

It is a detailed plan with keystone measures, including an increase in conference chairpersons of color, doubling the number of clergy members of color and investing $4.1 million in the health of the conference through debt forgiveness, equitable salary and shared mission apportionment in low-income communities.

“Our system continues racism in ways we don’t think about,” Greater New Jersey Area Bishop John Schol told United Methodist News. “Our apportionment system has systemic biases; we think we are being fair when we apportion everyone the same and yet there are low-income communities that don’t have as many resources.”

Schol has a long record of working to end systemic biases in The United Methodist Church.

As a pastor and a director for the United Methodist Board of Global Ministries, he was present at the 1992 General Conference when the body stopped the planned business and took a day out for prayer, fasting and conversation over the sin of racism. On that day, the fires were still burning in Los Angeles after the acquittal of police officers in the brutal beating of Rodney King, Schol recalled.

Out of that day of prayer, the 1992 General Conference established Shalom Zones. The purpose of the zones was to go into geographic areas suffering from systemic issues of poverty with hope and healing. United Methodists did this by partnering with the communities to tackle their challenges.

Schol was named national director of the Shalom Zones.

“A lot of the work initially was relief work — food and water,” he said.

Then people were trained to go into communities and help leverage assets. “Within four years, we had trained more than 1,000 people to leverage tens of thousands of dollars in their communities from the Shalom Zones,” he explained.

For instance, the Greater New Jersey Conference approved Journey of Hope at its 2020 annual meeting. “Journey of hope is a Shalom plan,” Schol said. “The gift of Los Angeles is new generations using the same tools to tackle the challenges of our day.”

The Baltimore-Washington Conference is undertaking a comprehensive journey to change every church into an anti-racist church in a campaign, “We Rise United.”

Part of the campaign’s commitment to becoming an antiracist church means that white people acknowledge and confess their participation in systems of racism and white privilege.

Bishop LaTrelle Easterling, episcopal leader of the conference, led a Juneteenth March for Freedom and Justice Demands to call Christians to address the sin of racism and for local, state and national politicians to stand for justice for all people. 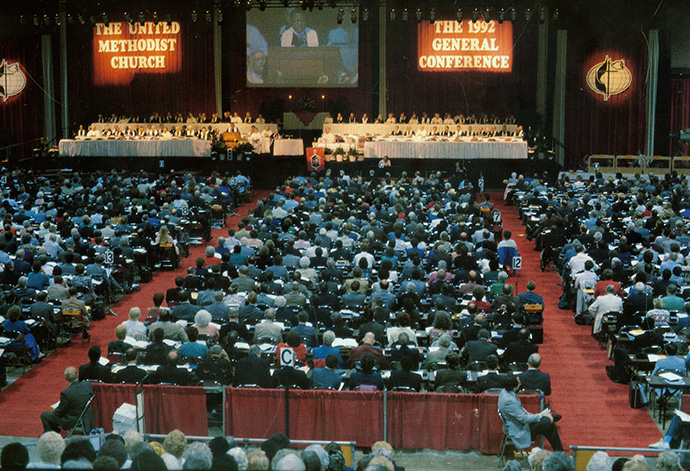 Delegates consider legislation during the 1992 United Methodist General Conference in Louisville, Ky., which established Shalom Zones as a way to partner with communities suffering from systemic issues of poverty. File photo by John C. Goodwin, GBGM.

At the start of the 2020 Arkansas Conference, Bishop Gary Mueller asked for a moment of silence to be taken in honor of the memory of George Floyd, the Black man killed by a Minneapolis police officer who kept his knee on Floyd for 8 minutes and 46 seconds.

Get more details about the anti-racism work of the U.S. annual conferences from their conference reports.

Mueller announced new initiatives the conference will be taking to better support and work with members of the Black community including a partnership with historically Black United Methodist-related Philander Smith College in Little Rock, Arkansas. The initiative will be a mandatory training event for clergy with Philander Smith’s Center for Social Justice.

In response to the public deaths of many Black people and in support of movements toward conversation and action, Florida Conference Bishop Kenneth Carter announced the formation of a Bishop’s Task Force on Anti-Racism. The task force will include three teams: training and accountability, public policy and witness and beloved community.

For more than 20 years, the Greater Northwest Area has been working on “change theory,” said Kristina Gonzalez, director of innovation for an inclusive church. Gonzalez is an intercultural trainer and consultant.

Change theory asserts that thriving congregations will practice inclusion, innovation and multiplication, she explained. “These congregations will be willing to engage their neighbors as partners striving together to create more just and equitable communities that sustain life in abundance (John 10:10).

“The conference was one of the first, if not the first, to dedicate staff to this work,” she said. The team is funded through Pacific Northwest, Oregon-Idaho and Alaska conferences.

Bishop Tracy S. Malone and the extended cabinet of the East Ohio Conference signed an anti-racism commitment in “repentance for silence in the face of racially motivated brutality that is pervasive throughout the nation.”

The commitment includes developing racial justice training, reviewing the conference’s policy on racial harassment, empowering church laity on addressing the problem of racism and engaging those seeking public office around the question: “How will you ensure that all people enjoy the same basic human rights and protections that our laws guarantee to all people?”

More than 700 East Ohio Conference laity and clergy signed a covenant to resist racism to show their support for the anti-racism commitment signed by the bishop and extended cabinet.

In the New York Conference, the Rev. Doris Dalton was asked by Bishop Thomas J. Bickerton to develop a new process for cross-racial/cross-cultural appointments. Dalton takes clergy assigned to these appointments through an introduction to intercultural competency training. The training includes a small group of the church’s leadership team.

“This means I cover concepts such as ‘What is culture?’ and ask them to talk about the culture of their church and the culture of the new pastor,” Dalton explained. Together, the group writes up a conflict resolution plan that includes what they have learned about cultural differences and commonalities.

“This is essential work because intercultural competency gives folks a foothold into the analysis of anti-racism,” she said.

Gilbert is a United Methodist News reporter in Nashville, Tennessee. Contact her at 615-742-5470 or [email protected]. To read more United Methodist news, subscribe to the free Daily or Weekly Digests.

The Arkansas Conference approved the exit of 35 churches, but not of three others seeking to leave The United Methodist Church.
Annual Conferences

A number of U.S. annual conferences are scheduling special sessions in 2023 to deal mainly with church disaffiliations. Most will be online.
Faith Stories