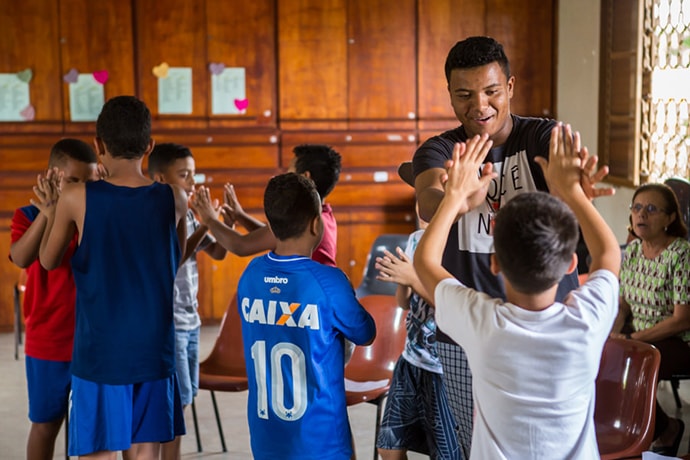 Vinicius Guimarães dos Santos, an educator with Shade and Fresh Water, an after-school ministry of the Methodist Church of Brazil, plays a game with some of the students at the Liberdade site in Brazil. The ministry is among many over the years receiving small grants through the Encounter with Christ in Latin America and the Caribbean Fund. Photo by Mark Greathouse, courtesy of Global Ministries.
For years, small grants provided through United Methodist donors have had a big impact in Latin America and the Caribbean.

The fund for these grants — Encounter with Christ in Latin America and the Caribbean — is significant itself, born from a desire by various Methodist bodies to develop a partnership in mission in the region and nurtured through the years by dedicated supporters working to add to their ranks.

The Rev. Cynthia Weems, South East District superintendent for the Florida Conference, is one of those supporters. From her own experience in Latin America after seminary and with congregations in the U.S., she has witnessed the “constant engagement” among mission partners and the need to tell that story.

“In every church I’ve served, whether in the Midwest or Florida, there has been need of a greater understanding of Latin America and the Caribbean,” she said.

A new grant cycle for Encounter with Christ in Latin America and the Caribbean starts every three to four years with an invitation to all Methodist churches in the region, says Edgar Avitia.

He is the regional representative for Latin America and the Caribbean at the United Methodist Board of Global Ministries — the fiscal agent that administers the Encounter with Christ Permanent Fund.

After the first year of a new cycle, the invitation letter only goes to churches that have not yet applied, he explained, “so that we can distribute the funds more equally to everyone.”

Depending on the money available, grants taken from the interest accrued on the permanent fund usually are distributed on a yearly basis, up to a limit of about $150,000.

Ten percent of that annual accrued interest is dedicated to the Encounter advisory board, currently led by the Rev. Cynthia Weems, to help with the fund’s promotion. Contributions for promotion also can be directed to a separate Advance fund.

The advisory board, dedicated as it is, “does not have a say” in the grant decision-making process, Avitia pointed out. That job falls to a seven-person grant review committee, composed of representatives from CIEMAL, MCCA and Global Ministries, which usually meets in the spring.

“When we (staff) identify a grant that does not necessarily fit in to the Encounter criteria or that we think could fit into another criteria, we try to refer that to another area,” such as Global Health or the United Methodist Committee on Relief, he said. “That’s part of the role of the staff.”

While it is an important source of funding, the intention is not for the Encounter with Christ grants to replace other funding “but to enrich and compliment,” Avitia explained. “We are in the business of developing and strengthening the networks.”

How to give
This year marks 25 years of fundraising and 15 years of grant making through the Encounter with Christ Fund. In October, Weems and Karen Distefano, the fund’s mission interpreter, told directors of the United Methodist Board of Global Ministries that, overall, $1 million in small grants had been distributed to missions developed by Methodist churches in 26 countries.

“We see desperation in many countries … If these funds can help alleviate a feeling of desperation or hopelessness, then we’ve done a part of our work,” Weems, who leads Encounter’s advisory board, told UM News.

But, with single grants that don’t exceed $10,000, the goal is to plant seeds, not provide long-term financial support. “It’s really meant to be a start-up,” she explained.

That could mean helping a small Methodist congregation in Mexico, with only about a dozen families, address a fresh crisis by providing overnight shelter, along with clothing and toiletries, to migrants.

Or it could be a building block to well-established ministries. The Shade and Fresh Water project, a longtime mission of the Methodist Church of Brazil and previous Encounter grant recipient, provides after-school programming through churches in some 50 locations.

Shade and Fresh Water engages more than 2,000 volunteers and reaches 2,570 children and youth. A recent ministry offers programs to some of the 7,000 Venezuelan refugees living in shelters in Brazil after fleeing a desperate economic crisis in their own country.

Vinicius Guimarães dos Santos, who started attending Shade and Fresh Water at the age of 6, stayed on as a volunteer. Now, at 23, he works as an educator with the project. “Kids need programs that support them and help them discover who they are,” says dos Santos. “Without that, many get lost and people lead them in the wrong way.”

The partnership has its roots in a weeklong “Encounter” gathering in August 1991 in Antigua, Guatemala. Legislation was passed the following year to create a permanent fund within Global Ministries to support new mission initiatives with financial contributions from United Methodists and Methodists.

The Rev. Wilson Boots, formerly with the New York Conference, and his wife, Nora, who served 18 years as Global Ministries’ key staff person for Latin America, have been dedicated to the fund’s progress. Cochabamba, Bolivia — Nora’s hometown — became their base of operations in 1993 for new missionary work in leadership and community health with CIEMAL. Wilson Boots also took on promotion and advocacy work for Encounter with Christ.

United Methodist Bishop Joel Martinez, a former president of the Board of Global Ministries, was an early supporter of the fund, encouraging the Nebraska Conference to become a significant contributor.

He particularly likes the fact that the Encounter with Christ partnership was set up to resource mission priorities established by the region’s churches themselves. “We collaborate at every level in the identification of priorities and the decision-making of funding and resource,” he said.

In the 1990s, initial projects helped empower women to become community health workers and advocates, the bishop said. Initiatives for children and youth also were an early priority. Today, the needs of women, children and youth continue to be a focus and grants also support work in evangelism and church development, racial and indigenous justice and community health.

Martinez believes the fund helped Methodism emerge as a faith in new countries in the 1990s, even under adverse conditions. Founding a church presence in Colombia, for example, was difficult because of the long-term insurgency there. “But in the midst of that, the church began to bear witness,” he said.

The Florida Conference has assumed a support role for the Encounter with Christ fund’s operating budget through its treasurer and Office of Missional Engagement, said the Rev. Clarke Campbell-Evans, who leads that office and sits on the Encounter advisory board.

One way the board has expanded the fund’s supporter base is by reaching out to former missionaries for the Latin American-Caribbean region. “It’s a way to be in touch with them,” said Campbell-Evans. “They have a relationship and see the value of what we’re doing and provide a link to reach out to others.” 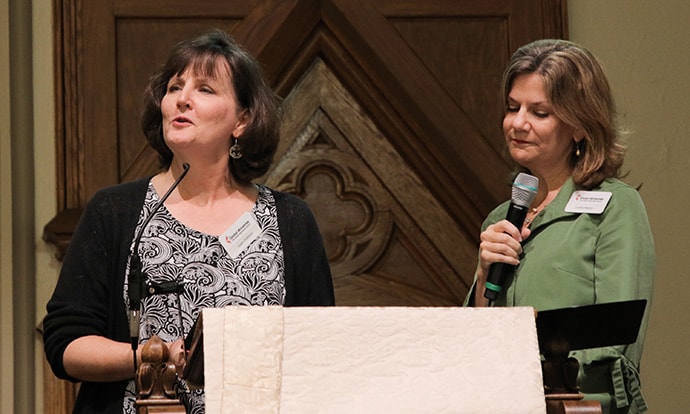 Karen Distefano, left, mission interpreter for the Encounter with Christ fund, and the Rev. Cynthia Weems, who heads the fund’s advisory committee, speak about the fund’s history and accomplishments during the Oct. 10 opening worship of the Global Ministries’ board of directors fall meeting in Atlanta. Photo by Anthony Trueheart, Global Ministries.
The board works closely with Distefano, the mission interpreter, who also gets the word out to conferences, local churches and individuals interested in supporting the fund to benefit the region.

Encounter hosted a breakfast last year at a Council of Bishops meeting and is participating in an Oklahoma Conference’s mission summit in January, centered on  the conference's four covenant partnerships with Bolivia, Chile, Mexico and Colombia. Distefano also is working directly with a New Jersey pastor with connections to Haiti and the Dominican Republic.

“This is what is so exciting for me — to help people connect their passion for the people of this region and partnering with them in ministry,” she said.

The Revs. Cynthia Weems and Clarke Campbell-Evans will lead a trip to the Dominican Republic in March that will allow participants to get a closer look at a grant project, see how money is being invested and consider opportunities for raising funds to support Encounter with Christ. For more information, contact Karen Distefano at [email protected].
Bishop Jane Middleton, a longtime advisory board member, first became involved in Latin American mission work as a New York Conference district superintendent. She has supported the Encounter Fund both personally and as an episcopal leader in Pennsylvania.

Middleton said she appreciates the fund’s goal of spreading seed money broadly across a “vast field” of mission and ministry. As an observer, she added, “It seems to me that innovation is an important part of the funding.”

For Wilson Boots, the heart of Encounter with Christ is “connectionality” on behalf of life. “To have this shared vision for mutual mission — south to north, north to south — is just so critical and so exciting,” he said.

Bloom is the assistant news editor for United Methodist News Service and is based in New York. Christie R. House, the senior writer/editor for Global Ministries, contributed to this report.

The Rev. Derrek Belase, director of connectional ministries for the Oklahoma Conference, shares the emotions he’s feeling as he prepares for the closing of the United Methodist church where he grew up.
Mission and Ministry