Judges, prisoners, educators, preachers and dreamers came together for three days to talk about how people of faith can work together to fix a broken prison system and welcome those released back into their communities.

From Oct. 25-27, more than 350 people from 20 states came to Nashville, Tennessee, for the 2018 National Prison Summit sponsored by the United Methodist Strengthening the Black Church for the 21st Century.

Workshops on subjects ranging from solitary confinement to toxic stress and its impact on brain development were sandwiched between panels, keynote speakers and on the first day, field trips to prison outreach ministries in Nashville.

One of the highlights of the summit was a panel of female judges. Four of the judges from Dallas are working to break the school-to-prison pipeline and replace it with what they are calling the Pipeline to Possibilities. They were joined by Shelia D.J. Calloway, a Nashville Juvenile Court judge.

The 2018 National Prison Summit is the fourth such gathering sponsored by Strengthening the Black Church for the 21st Century, a national program of The United Methodist Church.
“The SBC21 National Prison Summit aims to equip and inspire church leaders for holistic prison ministry. I believe the 2018 summit did just that,” said Toska Medlock Lee, summit planner. “When we first started, SBC21 had a collaborative approach to assemble resources and cutting edge training that would bring together policy experts, advocates, educators, and clergy leaders to help local congregations understand how to minister to persons impacted by incarceration.”
The Rev. Fred Allen is director of SCB21 at Discipleship Ministries.
“When we started the prison summit, we were intentional about the voices at the table — we wanted an interfaith coalition, we wanted to build community with organizations and non-profit and most importantly we wanted voices from the inside, the formerly incarcerated,” Allen said. “With this type of collaboration, we believe it’s more effective in equipping local church leaders on how to get involved in this type of mission. We are very thankful and proud to be the convener of such a movement.”

“It is not a myth, third-grade reading test scores are used to determine how many beds to buy for prisons,” said Jamila Thomas, director of Dallas Independent School District Racial Equity Office, as she moderated the panel.

Judge Amber Givens-Davis, presiding judge of the 282nd Judicial District Court in Dallas County, Texas, said she sees “an alarming loss of hope among young people who come before me in court.

“They have seen their parents in and out of the revolving door of prison. They are hopeless and so young.”

Judge Stephanie Mitchell, 291st Judicial District Court, said seeing so many young people with no support makes her pull out her “mother hat.”

“The first conviction sets up a revolving door that ends in felony court. They have to see they can be somebody. We have to plant a seed,” she said.

“It starts with me in juvenile court,” said Calloway. “I have the opportunity to give hope.”

Shequitta Kelly, Judge of Dallas County Criminal Court No. 11, shared her personal story as a teen mother who was encouraged by a teacher.

After she had her baby and returned to school, she said most of her teachers ignored her.

“One teacher poured into me, she asked me what I wanted to do, she pressed me and she would not leave me alone,” Kelly said. “Students are always irritated with teachers but take that moment, plant a seed every day. Someone like me needs you.”

All of the women said the most important thing anyone can do is vote.

“I don’t know the solution to institutional racism but we all have a part — vote. Pay attention to who your local District Attorney is, go sit in the courtroom,” said Lisa Green, judge for Dallas County Criminal Court No. 5.

On Oct. 26, in sharp contrast to the panel of judges, a panel of seven female prisoners from the Davidson County Sheriff’s Office spoke to participants.

Free Hearts, a nonprofit organization that supports and advocates for incarcerated and formerly incarcerated mothers and children of incarcerated parents, sponsored and moderated the panel.

The women talked about their lives before prison and the lives they hope to have again.

“We over-incarcerate,” said Chief Deputy John L. Ford III in introducing the panel. “We owe it to these individuals to make their transition as good as it can be.” 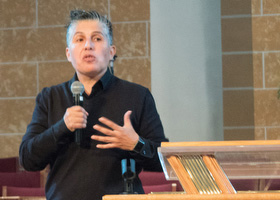 Tia E. Martinez, a consultant who is working on dismantling the school to prison pipeline, gives the first keynote address at the 2018 National Prison Summit held in Nashville, Tenn. Photo by Kathy L. Gilbert, UMNS.

At the end of the emotional discussion, the Rev. Harry ‘Rick’ Jordan, Concord Church, Dallas, called on participants to pray out loud for the women. Participants started praying, “God save them. God help them,” as the women stood on stage holding hands, tears rolling down their faces.

Redemption was the heart of the summit.

Tia E. Martinez, a Forward Change consultant who is working on dismantling the school to prison pipeline, laid out the history of mass incarceration.

“This is not the world our parents and grandparents grew up in,” she said.

Structural shifts in the economy hit black men the hardest and the War on Drugs that began in 1971 meant misdemeanors became felonies, she said.

Mandatory minimums were set because “judges were soft on crime,” she added. “More people were going to prison and going for longer times.”

Police started going after small offenses, like riding a bike on the street, and neighborhoods were over policed, she said. Single parenthood skyrocketed. Places of disadvantaged became geographically concentrated.

Standardized testing, “No Child Left Behind,” became a punitive regime that pushed out low scorers, she said. 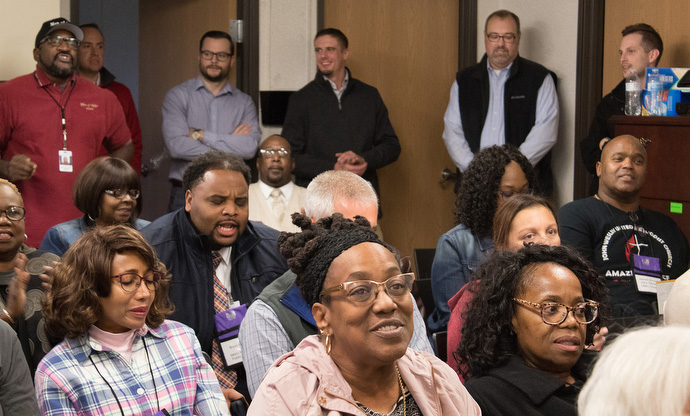 Participants at the 2018 National Prison Summit listen to staff of Men of Valor explain their mission to win men in prison to Jesus Christ and help them reenter society as men of integrity. The facility is located in Nashville, Tenn. Photo by Kathy L. Gilbert, UMNS.

“Suspension leads to dropping out and makes a person more likely to get arrested,” she said.

Martinez cited statistics: “Sixty-eight percent of black men without a high school education go to prison by age 35. It is 90 percent in California.”

And, she said, incarceration is passed down from one generation to the next.

“What is the one thing that can change this?” she asked. Participants yelled out “love.”

Gilbert is a multimedia reporter for United Methodist News Service. Contact her at 615-742-5470  or [email protected]. To read more United Methodist news, subscribe to the free Daily or Weekly Digests.

Ndume Olatushani is one of the artists whose work is included in Stations of the Cross opening in Washington during Lent.