People started lining up at 6 a.m. and three hours later, more than 200 people filled two rooms in the Hilton Newark Penn Station hotel to hear arguments about whether the election of a gay bishop follows or defies The United Methodist Church’s law.

Mountain Sky Area Bishop Karen Oliveto, the denomination’s only openly gay bishop, was not named in the legal documents and did not speak during the three-hour Judicial Council hearing on April 25. But any ruling could affect Oliveto, who was elected and consecrated bishop by the Western Jurisdiction in July 2016. .

Despite the divisiveness in the church over the role of LGBTQ people in the denomination, the hearing was respectful and peaceful.

Many in attendance were members of the United Methodist Queer Clergy Caucus. Dressed in white robes, they silently filed into the meeting room before the hearing convened to pray over all those present.

When the hearing ended, they filled the room again to pray, sing and hold Holy Communion.

For pastors like the Rev. Alex da Silva Souto, this hearing is about the church seeing LGBTQ people as “individuals who want to serve God.”

Souto, pastor of New Milford United Methodist Church in Connecticut, is spokesperson for the caucus.

“As painful as telling our stories is, at least there is a chance our lives will be known and we won’t be perceived as evil, immoral beings. We will be seen as God sees us,” he said. 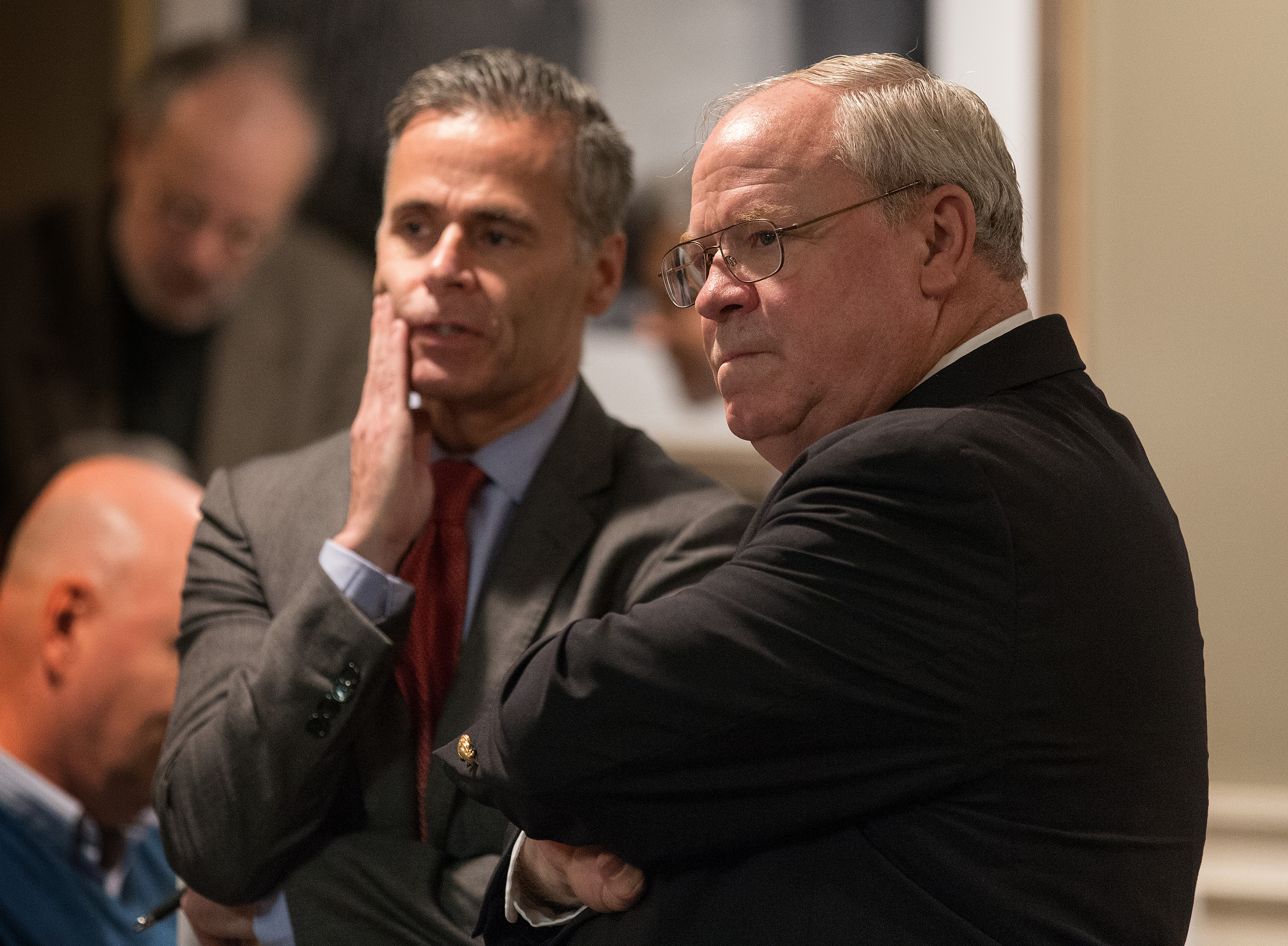 Dixie Brewster, the petitioner whose motion at the South Central Jurisdictional Conference initiated the proceedings, said the hearing was an excellent example of the church “at work to hear both sides of the most controversial issue we face as a denomination.

“My prayer for our denomination is to remain one church. I do not want a divided denomination, and I do not want to ‘choose’ which church I want to be a part of,” said Brewster, a lay representative to the 2016 South Central Jurisdictional Conference

The Rev. Keith Boyette, who represented Brewster before Judicial Council, said the oral hearing was “very respectful of the council, those presenting argument and of others.”

Oliveto and Brewster met for the first time today. They both said they are praying for each other and the church.

Oliveto was accompanied to the hearing by her wife, Robin Ridenour; her mother, Nelle Oliveto, and her childhood pastor from Babylon United Methodist Church, the Rev. Ken White. 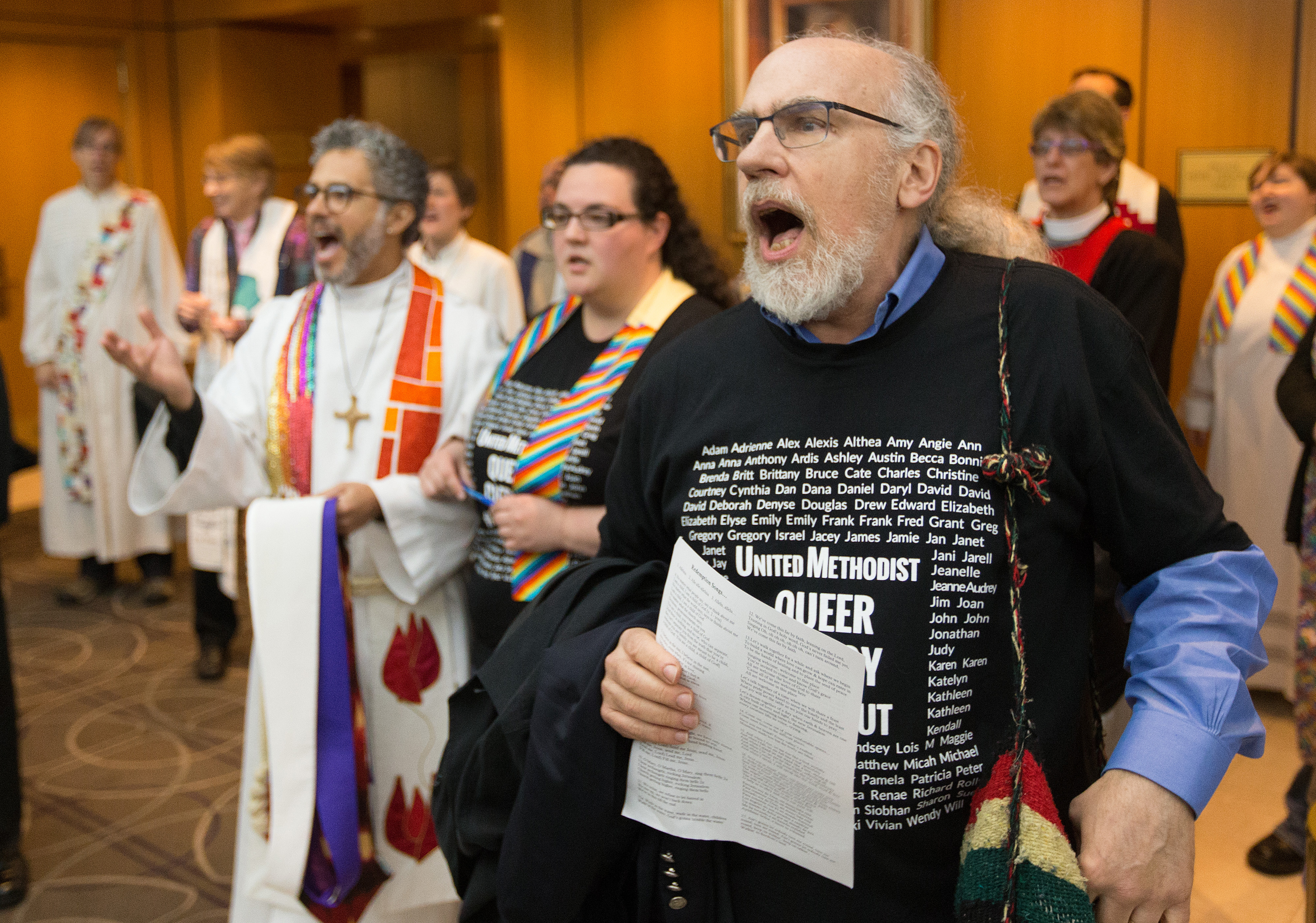 The Rev. K Karpen (right) of St. Paul and St. Andrew United Methodist Church in New York leads a song prior to an oral hearing before the denomination's top court, meeting in Newark, N.J., questioning whether a gay pastor can serve as a bishop. Photo by Mike DuBose, UMNS.

In a press conference after the hearing, Greater Northwest Episcopal Area Bishop Elaine Stanovsky talked about how important it is for each region of The United Methodist Church to choose its own leaders.

“The request before the Judicial Council this morning never named Bishop Oliveto. The arguments were about principle, law and precedence … nothing about Karen — her love, faith, call, sacrifice, mercy.”

During the press conference, Oliveto said, “I love being bishop.”

Oliveto talked about the church’s more than 40-year history of struggle with LGBTQ issues.

“I think that is the hardest thing about our church — for the past 42 years we have talked about LGBTQI people as issues instead of letting the reality of what God has worked in our lives inform the conversation. I pray we can widen the table.”

Gilbert is a multimedia report for United Methodist News Service. Contact her at 615-742-5470 or [email protected]. To read more United Methodist news, subscribe to the free Daily or Weekly Digests.