People stand in lines that wrap around the corner of this historic downtown church for a seat at both the 9 a.m. and 11 a.m. services each week, but Bishop Karen Oliveto’s last Sunday at the church she led for eight years was a little bittersweet.

The Glide Ensemble in bright red robes and the Change Band broke into a rousing rendition of Michael Jackson’s “Man in the Mirror.”

With horns blazing and voices soaring, the familiar tune sounded like an anthem and a challenge for a church known for its outreach to people living on the margins.

“If you wanna make the world a better place/Take a look at yourself, and then make a change.”

Ushers weaved through the crowded aisles passing out Glide paper fans and tissues.

There were tears on Aug. 14 as the church said farewell to Oliveto, a married lesbian elected to the episcopacy by the Western Jurisdiction in July in defiance of the church ban on ordaining “self-avowed practicing” gay clergy. She began her assignment as bishop of the Mountain Sky area — Colorado, Montana, Utah, Wyoming and two churches in Idaho — on Sept. 1.

The new bishop has left lasting changes on many hearts during her tenure at one of the largest churches in the denomination.

Tears running down her face, Oliveto told her congregation, “God has been singing a song to me, particularly one line for you.” Quoting from Gregory Norbet’s “All I Ask of You,” Oliveto sang, “All I ask of you is forever to remember me loving you.”

The theme of her final sermon was a message to her Glide family: “Let Your Light Shine.”

Born in Babylon, New York, on Good Friday in 1958, elected and consecrated bishop of The United Methodist Church in 2016 — Oliveto sees her life just rolling out the way God intends.

She believes her birthdate and place are not coincidences, but proof that God has always been in control of her steps.

Education: B.A. in psychology from Drew University, M.Div from Pacific School of Religion, master of Philosophy and a Ph.D. in religion and society from Drew’s Caspersen School of Graduate Studies.

Favorite Bible verses: “Each day I set before you life and death. Therefore choose life, that you and your descendants may live.” Deuteronomy 30:19

“In all things God works for good for those who work for God.” Romans 8:28

Heroes in Bible: Woman at the well, Queen Esther, Woman who caused Jesus to change his mind, Matthew 15:21-28.

And beyond: Anna Howard Shaw, an early ordained woman Methodist minister and suffragist.

What would surprise people about you? I’m a rock drummer, amateur magician. My library card is one of my favorite possessions.

Raised by the church

“My mom had an eighth-grade education; she was the daughter of a coal miner. My dad was the son of Italian immigrants. He was an aerospace engineer, and their marriage didn’t last very long.”

Her overwhelmed single mother would drive up to the United Methodist church on Sundays and “kick us to the curb, saying ‘I’ll be back in an hour.’ ”

It was her mother’s only free hour in the week and Oliveto and her two younger sisters loved it.

From Sunday school to choirs to youth groups, the church was devoted to young people. She heard her call to ministry at age 11 when her choir director asked: “Did you ever think about ministry?”

“I loved church, I loved the Scriptures, I loved Bible stories and I saw myself in them. I loved the hymns, which taught me so much about faith. I saw there was great joy in church. And I thought, ‘Oh my gosh, that is my call. Where else can I bring all that I am to something?’ Even at 11, I had that sense.”

Her first appointment was to tiny, rural Bloomville (New York) United Methodist Church. Many people in her congregation had no electricity or running water. She also became the town’s ambulance driver.

“It was an amazing pastoral gift because I was the only pastor in town, and I would show up whenever there was a catastrophe. I would let the EMTs care for the medical stuff and I would be caring for the wounded or grieving.”

Oliveto later served as a campus minister at San Francisco State, pastor of Bethany United Methodist in San Francisco and a faculty member at the Pacific School of Religion in Berkeley.

She is a two-time General Conference delegate, a five-time jurisdictional conference delegate and serves as an adjunct professor of United Methodist Studies at the Pacific School of Religion.

Bethany held a reception for Oliveto on her last weekend in San Francisco. She was first a member of the congregation, then pastor from 1992-2004. 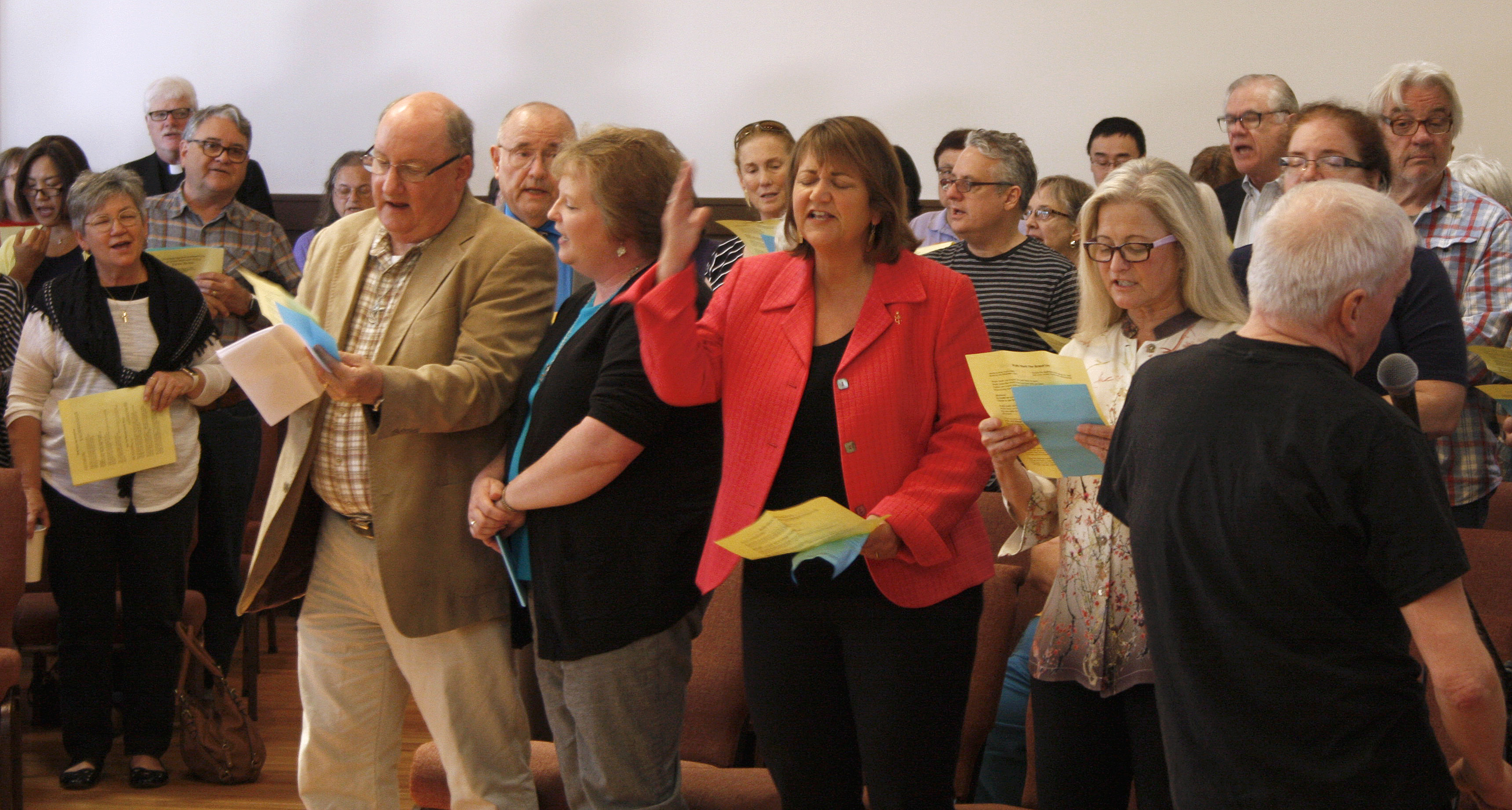 Bethany United Methodist Church held a reception for Bishop Karen Oliveto (center, red jacket) and her wife, Robin Ridenour, during their last weekend in San Francisco, Aug. 13-14. Oliveto was first a member of the congregation, then pastor from 1992-2004. Photo by Kathy L. Gilbert, UMNS

Members there talked about Oliveto becoming their pastor. The congregation went to the district superintendent and told him they wanted a lesbian pastor. “He replied, ‘We don’t have those.’”

The congregation responded: “Well, can we have Reverend Karen Oliveto?”

Michael Eaton, a member of Bethany, remembers when San Francisco started offering marriage licenses to same-sex couples in 2004. He and his longtime partner jumped at the chance.

They called and Oliveto met them at city hall.

“We didn’t know how long it would continue. We got married that evening,” he said. The couple later married again in a ceremony at Bethany — one of the first legal marriages between a gay couple to be performed in a United Methodist church, Oliveto said.

That wedding led to the first complaint brought against Oliveto. It is against church law to conduct same-sex marriages in a United Methodist church.

Bethany member Gloria Soliz said that was a painful time for the congregation, which is half gay and half straight.

“I think the congregation felt like we all had been brought up on charges,” she said. “We backed Karen up, and we all did a lot of growing together.”

That complaint was later dropped, but Oliveto is facing “multiple” complaints filed since she was elected bishop because the church doesn’t allow ordained pastors to be “self-avowed practicing homosexuals,” and states “the practice of homosexuality is incompatible with Christian teaching.” Next spring, the Judicial Council, the denomination’s top court, will take up a request by the South Central Jurisdiction for a review of questions of law related to her election.

“I am as much called to being a United Methodist pastor as I am my sexual orientation. It is just part of my DNA,” she said.

The call to be a bishop was something she long resisted.

“I believe call is both that we hear God’s call and people confirm that call. I really resisted it because I did not want to harm the church. I am out (as a lesbian) and I have been out since 1992 in my ministry. I didn’t want to be harm to anyone or be harmed.”

But at the end of The United Methodist Church’s 2016 General Conference she began thinking her voice could help the church.

General Conference delegates decided to pause in the debate related to homosexuality and asked the United Methodist Council of Bishops to form a special commission to examine the denomination’s law book.

Human sexuality, which she said is code for LGBTQ people, isn’t the issue.

“We have a theological divide, and that’s not a bad thing.”

So long, not goodbye

Curtis Maughlan, like many Glide members, got emotional talking about Oliveto leaving.

“It was a struggle I had for years and years: How do I truly accept myself when my belief system is condemning me?”

Oliveto’s election is an opportunity for the church to grow beyond its rules, he said.

Maughlan believes Oliveto will be a gracious and loving presence in the church — pointing to her sermon on being a light in the world.

“Hopefully that spirit will help bring light to the world and bring light to The United Methodist Church to help it truly be opening and welcoming as the body of Christ it is supposed to be. That is my hope, my joy in her election and my prayer.”

The lack of regional decision-making authority in the U.S. United Methodist conferences caused the recent dilemma over not being able to hold episcopal elections.
Mission and Ministry