Was last July’s election of a gay bishop by United Methodists in the denomination’s U.S. Western Jurisdiction a violation of church law or a legal elevation of a clergy member in good standing?

Representatives of both positions argued their case before the United Methodist Judicial Council, the denomination’s top court, during an April 25 oral hearing.

Athough she was not named in the motion for a declaratory decision submitted to Judicial Council, the focus was squarely on Bishop Karen Oliveto, the denomination’s first openly gay bishop. Oliveto, elected in July, currently serves as bishop of the Mountain Sky Area, which encompasses Colorado, Montana, Utah, Wyoming and a church in Idaho.

Opening brief on behalf of Dixie Brewster, file by the Rev. Keith Boyette

Reply brief on behalf of Dixie Brewster, filed by the Rev. Keith Boyette

Opening brief on behalf of the Western Jurisdiction College of Bishops, filed by Richard A. Marsh and Llewelyn G. Pritchard

Reply brief on behalf of the Western Jurisdiction College of Bishops, filed by Richard A. Marsh and Llewelyn G. Pritchard

The 9 a.m. hearing — which lasted nearly three hours, including a break — drew about 200 people to the Hilton at Newark Penn Station, some of whom sang, worshipped or held communion before or after the hearing.

Those seated in both the main hearing room and an overflow room equipped with a closed-circuit broadcast listened quietly and attentively. It was the only portion of the council’s April 25-28 meeting open to the public, but N. Oswald Tweh Sr., president of the Judicial Council, thanked the church for its “prayerful support” during his opening remarks.

Oliveto was present at the hearing, along with other bishops of the Western Jurisdiction, staff from her jurisdiction and a large group of supporters.

Also present were others interested or concerned about how Judicial Council might rule in the case — including Dixie Brewster, the petitioner and a lay representative to the 2016 South Central Jurisdictional Conference, whose motion initiated the proceedings.

The Rev. Keith Boyette represented Brewster before Judicial Council and filed briefs on her behalf that ask the council to rule that the Western Jurisdiction’s actions in electing, consecrating and assigning Oliveto “negate, ignore and violate” provisions of the Book of Discipline, the denomination’s law book. 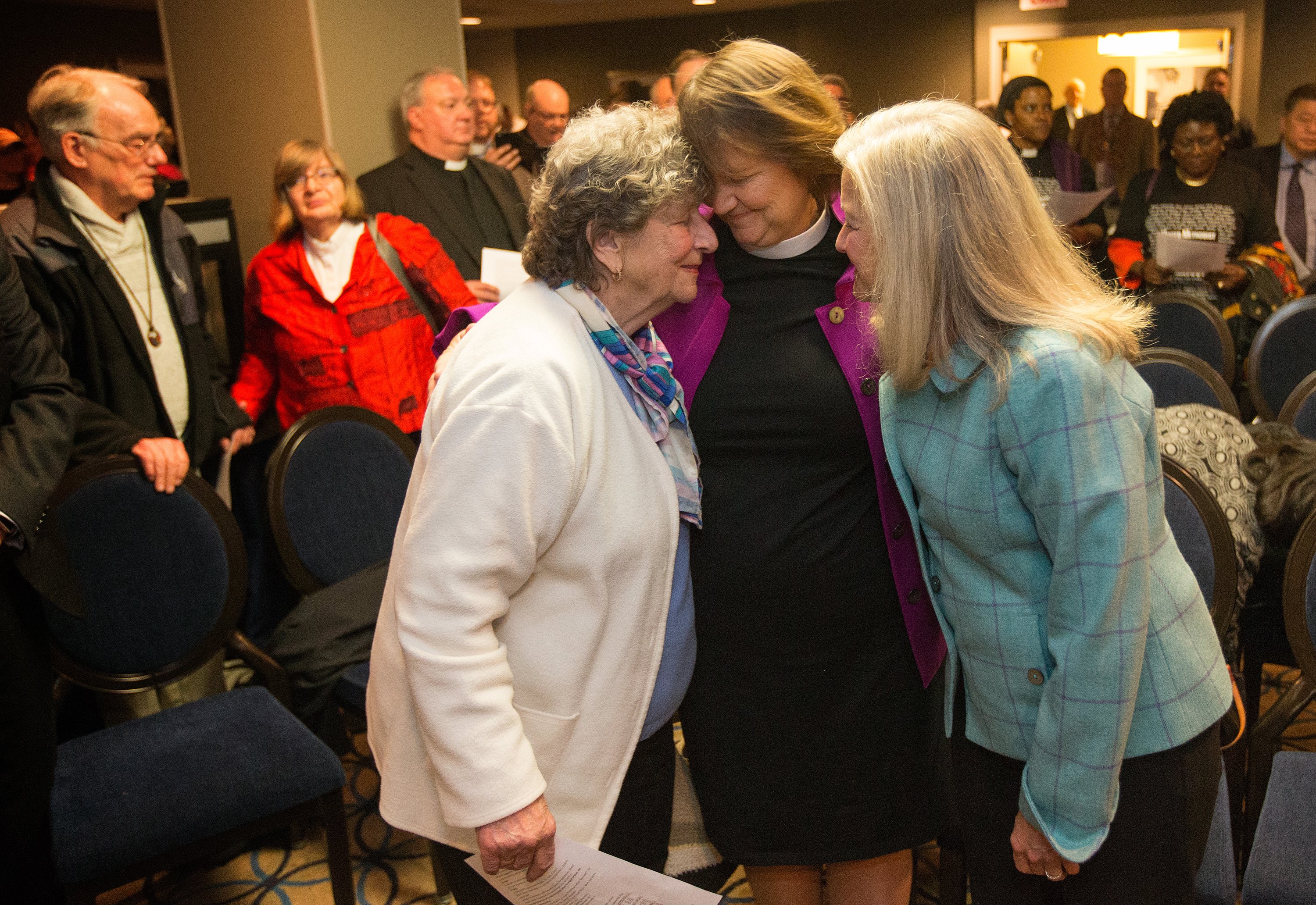 The constitution provides that elections in jurisdictions be “free from interference or oversight” from other jurisdictions, he said. On that basis alone, Marsh continued, Judicial Council should decline the request for a declaratory decision on the matter.

Boyette rejected that position. “A person elected to the office of bishop is a bishop of the entire church,” he said. Any bishop can go to another jurisdiction, preside at General Conference, nominate church members to the general boards and agencies or serve in a leadership position for those boards and agencies, he added.

Marsh also argued that Oliveto was an elder in good standing and “as such, met all requirements” to be bishop.

Noting the public record of Oliveto’s 2014 same-sex marriage to Robin Ridenour, a United Methodist deaconess, Boyette disputed that she was a qualified candidate for the episcopacy. He argued that a public record of such a marriage is the same as someone being “self-avowed” as a practicing homosexual. The Discipline, he said, “makes clear” that an ordained person must be celibate in singleness or faithful in heterosexual marriage.

But the Discipline does not specifically prohibit a clergy person from being in a same-sex marriage, Marsh said. Nor, he told the council, does such a marriage equal a public statement of being self-avowed or create a legal definition of “practicing” for the church.

The decades-long position of The Book of Discipline, the denomination’s law book, is that all people are of sacred worth but that the practice of homosexuality is “incompatible with Christian teaching.”

Since 2004, chargeable offenses under church law have included “not being celibate in singleness or not faithful in a heterosexual marriage” and “being a self-avowed practicing” gay clergy member.

Earlier in the day, the United Methodist Council of Bishops had issued a “call letter” for a special session of General Conference to be held Feb. 23-26, 2019 in St. Louis. The purpose is to receive and act on the bishops’ report based on recommendations from the Commission on the Way Forward, a body established to help the denomination discuss conflicts over issues of sexuality.

Referring to that body, Marsh said that Judicial Council “should not interfere with or complicate the commission’s work” by making a ruling in this case.

Boyette declared, however, that Judicial Council is the only body within the denomination that could declare the Western Jurisdiction’s action “to be unlawful, null and void and of no effect.”

The petition on the Western Jurisdiction episcopal election is one of seven being considered by Judicial Council this week. No decisions will be released until the meeting has concluded.

Bloom is the assistant news editor for United Methodist News Service and is based in New York. Follow her at https://twitter.com/umcscribe or contact her at 615-742-5470 or newsdes[email protected]. To read more United Methodist news, subscribe to the free Daily or Weekly Digests.