Members of the women’s organization in the South Africa Conference marched in the streets of Gugulethu to protest gender-based violence.

The groups joined with the South Africa government’s Department of Sports, Arts and Culture to organize the march.

“For the first time in the history of (the women’s) organization in South Africa,” said Khuliswa Mbatha, conference women’s president, “we have managed to invite a government department in tackling issues of gender-based violence within our communities.”

On the first day of the Aug. 11-14 conference, United Methodists were joined by the communities of Gugulethu, Khayalethu and Nyanga — townships on the outskirts of Cape Town — and government representatives. Together, they embarked on a march against gender-based violence under a “Thursdays in Black” banner.

Leading the march were Mbatha and advocate Vinolia Mabele, deputy chair of social cohesion for the government.

The march came on the heels of the death of Nontsomi Mdodana, 29, of Gugulethu, who was found dead at her boyfriend’s house on July 31. Her death is under investigation. 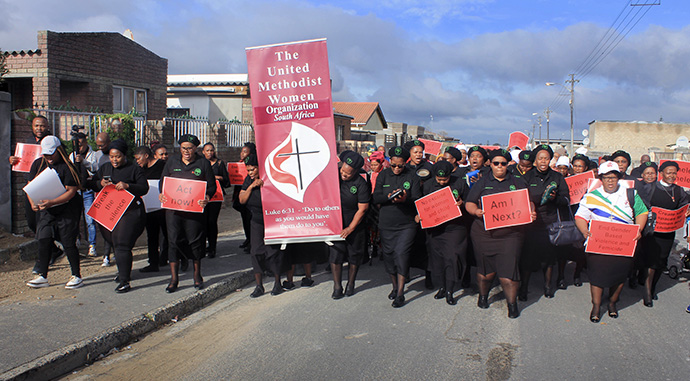 Community members called for an end to gender-based violence.

“The event was a success,” said Suzanne Zumana with the Cape Town counselor’s office. “The planning was great as we know that our communities are faced with a big challenge when it comes to (gender-based violence).

“This made a huge impact because community members were given the opportunity to voice out and were educated about GBV,” she added. “My wish is that these events occur once or twice a year in our communities.”

A Human Sciences Research Council survey indicated that while the true extent of gender-based violence is unknown, physical and/or sexual intimate partner violence was reported to have been experienced by up to 37.7% of adult women in their lifetime. More than 42,000 rapes were reported to the police in 2019-20, according to the council’s report, and experts say the cases of rape are significantly underreported. Among children, 35.4% of young people experienced some form of sexual abuse in their lifetime, the council reported, while 56% of femicide victims were murdered by intimate partners.

“Gender-based violence cuts from both sides,” said the Rev. Innocent Muhomba, pastor in charge at Hebron United Methodist Church in Cape Town. “Men and women must be treated with respect, regardless of gender; women and children are the ones in danger more.”

Community members welcomed and thanked the church for organizing the march. They remembered Mdodana during a prayer and candlelight service.

Gender-based-violence in South Africa is visible across rural, semirural and urban settings.

“Many women in our country fall prey and (become) victims of violence every day,” said Charlotte Monaheng, 26, of Gugulethu. “When one tunes to the radio, watches TV or reads a newspaper, (they are) savagely stricken by the news.”

Men who were present for the march also spoke out against the violence.

“(They) made a promise that, going forward, they will not be spectators anymore when women and children are being abused,” Maliwa said.

“There was a time when issues of gender violence did not surface the same way they do today,” said Kumaio. “Lamentably, women and children are the easy prey of this kind of violence.

“We look forward to a harmonious social fabric of our country, where a brother will look at a fellow brother or sister with love and respect.”

Makunike is the director of communications for the South Africa Conference of The United Methodist Church.