The weekend in the middle of the World Council of Churches General Assembly is expressly intended for excursions and congregational encounters. The participants and contributors traveling from around the world are given the opportunity to get to know the respective life of the churches of the host city and country.

For the United Methodist Church of the Redeemer in Reutlingen, that Sunday was all about international Methodist encounters. Both the morning church service and an evening reception brought together Methodists from four continents, German churchgoers and guests from other United Methodist congregations who came just for that day.

The World Council of Churches 11th Assembly took place from Aug. 31-Sept. 8. In connection with the theme of the ecumenical gathering — “Christ’s Love Moves the World to Reconciliation and Unity” — Bishop Ivan Abrahams made reconciliation the centerpiece of his sermon. 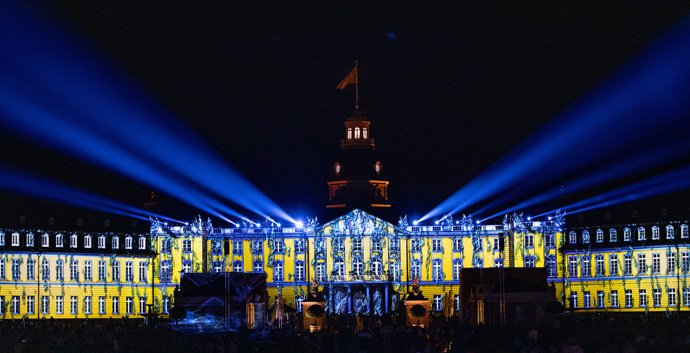 A light show at Karlsruhe Palace was among the cultural attractions enjoyed by participants at the World Council of Churches' 11th Assembly in Karlsruhe, Germany. Photo by Mike DuBose, UM News.

Abrahams, the General Secretary of the World Methodist Council and bishop of the Methodist Church in Southern Africa, encouraged the churchgoers to undertake every effort to heal relationships by offering forgiveness and pardon. This is a biblical command, Abrahams stated.

He also referred to Karl Barth, who attributed a central importance to the topic of reconciliation in his extensive theological works. Reconciliation, according to Barth, is not negotiable, but rather stands as a command of the highest order. Abrahams summarized this command: “We are ambassadors of reconciliation.” Therefore, it is about more than just personal well-being. The goal of reconciliation is to renew and transform society and the world.

Christians should not, however, passively wait for better times. Rather, they must orient themselves with the almost humorous-sounding sentence that the U.S. writer and activist June Jordan (1936-2002) formulated: “We are the ones we have been waiting for.” Abrahams stressed that again: “We are the ones to bring about change.” 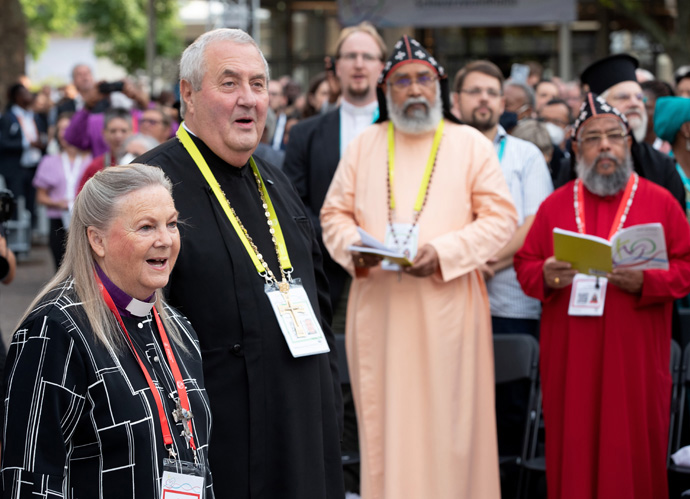 Methodists have always been excellent at displaying this attitude, Abrahams said. They have had an untamable spirit and could always strike up a song, even in the face of hopeless situations.

He issued a challenge to his Methodist siblings from around the world: “The future belongs to us; let us willingly serve it.”

At the evening reception, for which many of the international Methodist guests returned to the Church of the Redeemer, Bishop Harald Rückert took up the thoughts of the morning sermon. The United Methodist bishop who oversees the Germany Central Conference combined his greetings and a short report on the situation of church and Methodist work in Germany with the special geographic location of the city of Karlsruhe.

Today, people give scarce any thought to the nearness of France, which lies across the Rhine not far from Karlsruhe. It is almost no longer perceptible that Germany and France once faced each other as enemies, even archenemies. It is like a miracle, Rückert said, that in this originally hostile relationship, reconciliation happened after the Second World War.

This change can serve as an impressive example of what reconciliation can achieve. Rückert expressly connected that with the situation in which The United Methodist Church finds itself. The worldwide discussion within the church over questions of sexual ethics is tearing the church apart.

The example of the region of Karlsruhe, where two deeply hostile nations once faced each other, can offer encouragement, Rückert said. Today, there is no longer even a visible border between the formerly hostile nations. The example underlines the biblical truth: “Reconciliation is possible.”

With these substantive messages, Methodist guests encountered one another morning and afternoon and made new contacts or deepened existing ones. The General Assembly of the World Council of Churches thus served as impetus for “worldwide Methodist ecumenism.”

The Week of Prayer for Christian Unity is an annual observance held January 18-25 in which all Christians everywhere are encouraged to pray for unity in love and mission.
Social Concerns

On the final day of the 11th General Assembly, delegates adopted numerous documents, including statements on peace.