Crossroads United Methodist Church in Compton, California, has about 100 members, with 50 active. The average age of the mostly African-American church is 75-years-old.

Compton, California, with a population of close to 1 million, is predominately Hispanic and African American. More than 25 percent are living in poverty, twice as much as the national average.

This community is incredibly impacted by mass incarceration because here nearly 75 percent of arrests are male and 40 percent are African American.

The Rev. Adrienne Zackery looks at those numbers and sees a call from God.

“We are a small church but mighty in passion,” she said as she began a workshop here at the 2018 National Prison Summit on how expungement clinics can re-energize mission.

“Our theological foundation is Matthew 25:35-40 … ‘I was in prison and you visited me.’ We are called to be light and salt for those who are the least,” she said.

After attending the 2014 National Prayer Summit held in Dallas, Zackery came home and told Karen A. Henry, an attorney in her congregation, that she wanted to start holding expungement clinics. These clinics help former incarcerated people seal arrest records so they can find employment and housing. 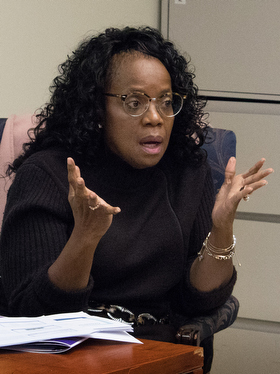 Henry, who is a corporate attorney, didn’t know anything about criminal law. She had no idea how to start, but she didn’t say no to her pastor.

Together Zackery and Henry set out to hold the first clinic in 2015. This November they will hold their sixth. They learned a lot along the way.

The first clinic they held was “on the hottest day of the year,” Zackery said, and over 100 people showed up.

“We had to go buy an air-conditioner,” Zackery said.

Since that first experience they know to limit how many people they can help in a day.

“Think through what you want to do,” Henry said. “We wanted people to walk away with the papers they needed to take to the courthouse.”

Henry said a handful of committed people — four to five— is all that is needed. The key to success is getting buy-in from the congregation, she said.

As she walked workshop participants through the process Crossroads used, she cautioned that all the advice she was giving was based on Compton and they would need to do their own research in their hometowns.

Her step-by-step advice includes: inventory your expertise, find members of the congregation who could be a resource, select good partners and leverage synergies.

“Who would have thought that three years later we would be in Nashville, Tennessee, sharing very concrete evidence of what it means to go beyond the local church,” she asked.

Zackery said any church can do the same thing. And she adds, every church needs to take responsibility for ex-offenders coming back into their neighborhoods.

“In my ‘seasoned’ congregation it gives a mother who can’t walk a chance to sit at a table and do registration. It gives an older gentleman an opportunity to help young men by offering to pray with them.

“Even though there might be barriers, everyone in the congregation is able to do something,” Zackery said. “Jesus is the answer.”

A free series of evening webinars April 26-30 will offer advice to church members on how to support people returning from prison and help them find gainful employment.
Local Church

Two Korean United Methodist clergy shared free hymns and special music that can be used during the Lenten season and on Easter Sunday.