Ndume Olatushani is an artist, teacher and internationally known speaker — success he achieved after spending 28 years in prison for a crime he didn’t commit. 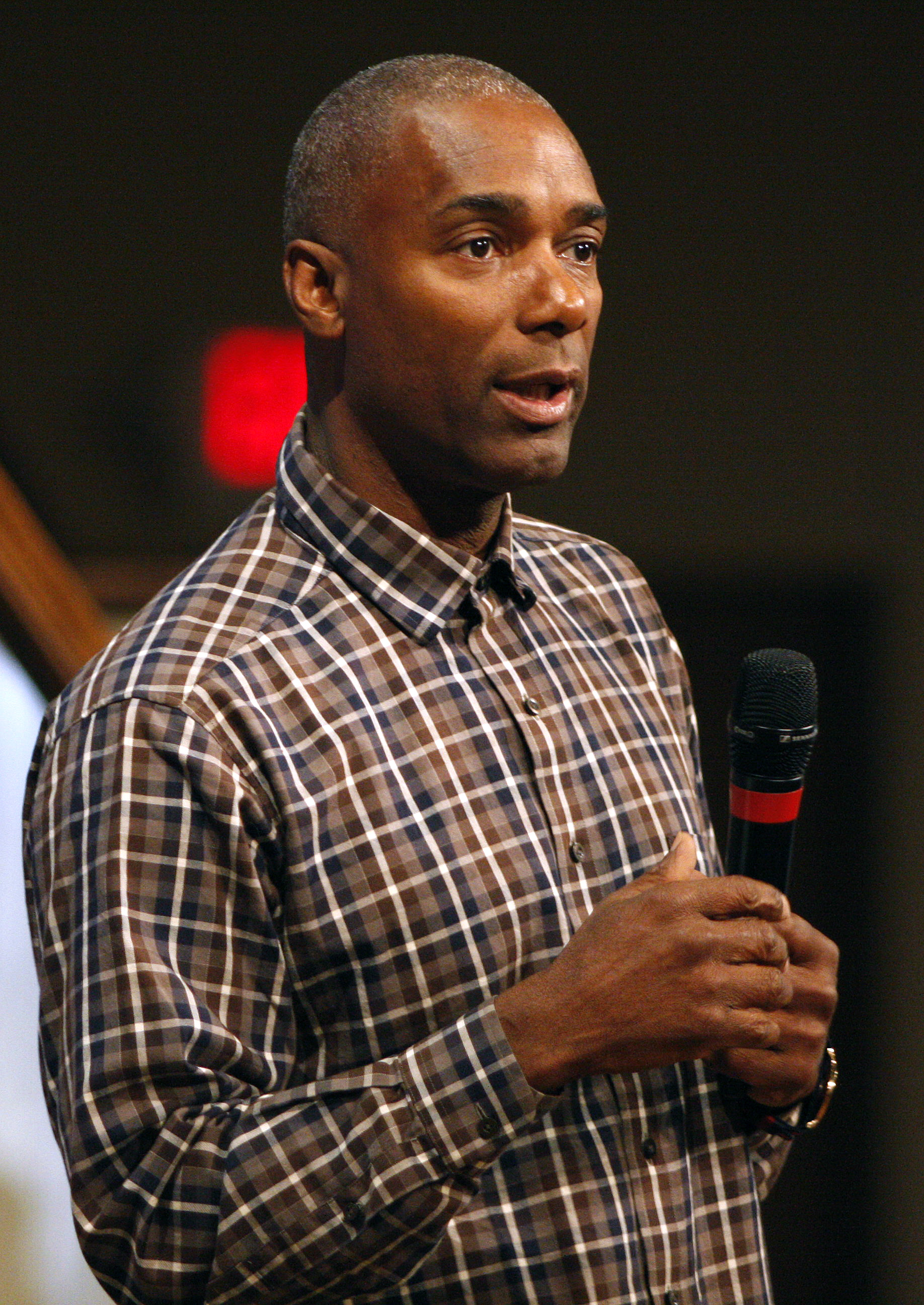 Ndume Olatushani, an artist, teacher and international speaker against mass incarceration of people of color, speaks to participants in the School-to-Prison Pipeline educator’s summit at Concord Church of Dallas. Photo by Kathy L. Gilbert, UMNS.

As a fifth-grader, he wanted to be a veterinarian. One day his teacher went around the room asking the kids what they wanted to be when they grew up. When he said veterinarian, she suggested he think of something else, something he could do with his hands — like construction.

That discouragement set him on a negative trajectory. He no longer believed he could be what he always dreamed of being. He started getting into trouble and didn’t finish high school.

In 1986, 28-year-old Olatushani was convicted of murder and placed on death row. He spent 28 years “caged” for a crime he did not commit— 20 of those on death row.

He has been free for the past four years thanks to a law firm that took his case and proved his innocence.

“Now I know I could have been a veterinarian,” he told participants of a national Prison Summit on Mass Incarceration sponsored by the United Methodist Strengthening the Black Church for the 21st Century.

“Educators have power,” he said.

During a three-day intensive conversation about mass incarceration, judges, lawyers and police talked to church prison ministry teams, educators and church leaders about ways to break down the school-to- prison pipeline. The conversation took place during a national summit held Oct. 27-29 at Concord Church of Dallas.

Most participants in The School-to-Prison Pipeline educator’s summit on Oct. 27 were teachers and school administrators in Dallas.

Terry S. Smith, chief juvenile probation officer for Dallas County, related facts and figures about young black and Hispanic children who are disproportionally sent to juvenile detention and suspended from school for behavior as minor as not paying attention in school or violating the dress code.

She started her presentation with a quote from famed abolitionist and social reformer Fredrick Douglass, who said: “It is easier to build strong children then to repair broken men.”

African-Americans and Hispanics make up the majority of people in prisons, usually beginning in juvenile detention, she said. She said these “babies” are victims of “poveritytis,” lack of resources and lack of a voice.

“Once a youth is placed in detention they will not get a high school diploma,” she said. “It is an easy answer to send a child who is misbehaving to the principal where they can get a referral and then suspended.”

Other speakers and workshop leaders echoed the same message. 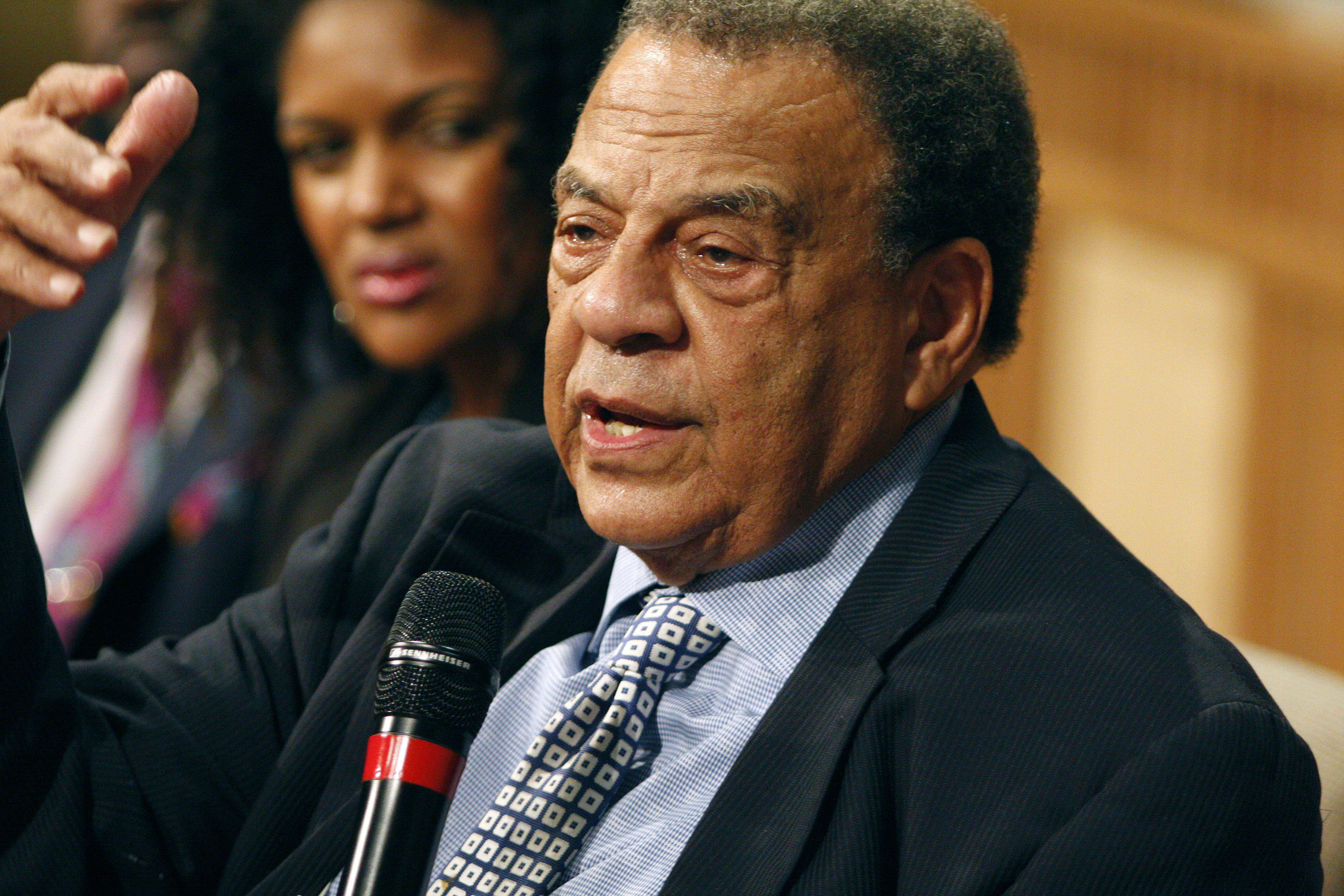 Civil rights leader Andrew Young gives the closing remarks during the national Prison Summit on Mass Incarceration. Young has served as a member of Congress, mayor of Atlanta and U.S. ambassador to the United Nations. Photo by Kathy L. Gilbert, UMNS.

Jamila Thomas, coordinator of African-American Student Success Initiative of the Dallas Independent School District, told educators to remember children pass through many dangerous and fearful things to get to the bright white spot that is school, their safe place.

“Listen with your heart before your head. Try to understand their language,” she said.

Members of the Children’s Defense Fund team from Nashville, Tennessee, including Olatushani and others who spent 20 years or more in prisons for crimes that they did not commit, were featured in the plenaries and workshops. The team is committed to transformative justice and nonviolent direct action “to disrupt and dismantle” the cradle-to-prison pipeline.

Closing the summit was Andrew Young, who was a civil rights leader with the Rev. Martin Luther King Jr., a member of Congress, mayor of Atlanta and U.S. ambassador to the United Nations.

He talked to participants about his days with King but also emphasized the importance of family and church leaders in a young person’s life.

“We have to find ways to re-construct families. It is not going to be easy or a quick fix. You are on the right track —the problem is mass incarceration,” he told participants.

Young added: “It is easy to point fingers and blame. There is enough guilt to go around. Dr. King used to say, ‘We don’t blame you for segregation; we blame ourselves. A man can’t ride your back unless you bend down and let him.’ ”

The statistics are alarming and the greatest barrier to putting an end to it is “us,” said the Rev. Michael Waters of Joy Tabernacle A.M.E. Church in Dallas. “We need to involved. We need mentors, volunteers and resources.”