The United Methodist University in Sierra Leone, founded by the late resident Bishop John K. Yambasu, graduated its first class on Feb. 26. Seven students graduated in theology, 18 with National Diplomas in Education and seven with certificates in chaplaincy.

Yambasu, who died in a car accident in August 2020, was the chancellor of the university. Although he did not live to award certificates, his memory lives on.

Speaker after speaker at the ceremony recalled his zest and passion as he worked around the clock to actualize his United Methodist university dream for Sierra Leone. A moment of silence was observed in memory of the visionary resident bishop, who was awarded a posthumous certificate of recognition for his hard work and a dream fulfilled. 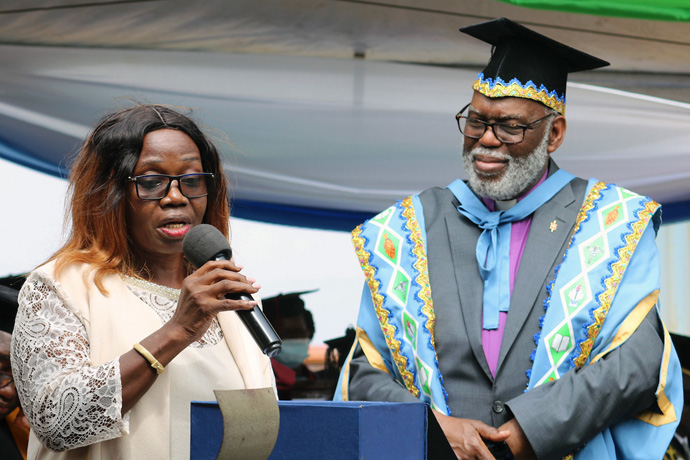 “The emphasis on skills alone,” Carew cautioned, “may create educated teachers who take bribes from their students; professional nurses and doctors who consistently exploit their patients; and politicians who betray the trust of their people and drive their country to economic ruin. Education should never produce learned monsters.”

That is why, he said, the United Methodist University is committed to the motto of “Excellence, Integrity and Service.”

“The multidimensional emphasis on Christian spirituality, character formation and skills acquisition in our curriculum,” Carew noted, “will necessitate the process of creating students of integrity and academic excellence.” 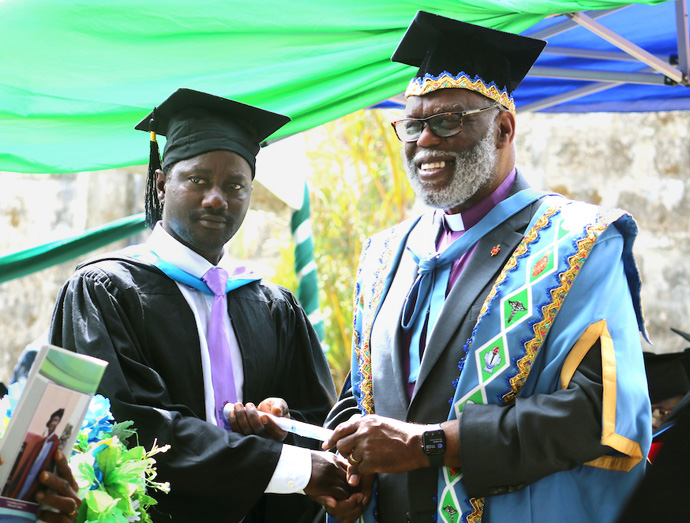 Interim Sierra Leone Conference Bishop Warner H. Brown (right) awards a symbolic certificate in Bachelor of Theology with Honors Degree in Christian Education to the Rev. Stephen N. Senesie. Senesie was among the first students to graduate from The United Methodist University in Sierra Leone, which opened in late 2017. Photo by Phileas Jusu, UM News.

The faculty of theology, the first to be established at the university, is now training chaplains for all United Methodist primary and secondary schools. The Sierra Leone Conference, Carew said, views the school system as an evangelical wing of the church and has over 300 primary and 50 secondary schools across the country. In the next four years, the university expects to train at least 400 teachers as chaplains in United Methodist schools.

“The training of professional teachers to return moral decorum to the classroom,” Carew said, “is certainly one way to impact the wider society in search of a moral compass.”

The first students from the new faculty of Transformative Education produced the best results in the National Diploma in Education exams, with three students passing with distinction.

The university’s preparatory program addresses a massive failure rate of students in the West Africa Senior Secondary Examination. Over the past two years, the university has been preparing students who failed the WASSCE, and many have passed their exams and gained admission to higher institutions of learning.

The university, the vice chancellor said, intends to launch two senior preparatory schools known as the Bishop Yambasu Schools of Excellence, one in Freetown and another in Bo in the south. Students who pass the Basic Education Certificate Exams will be admitted to the Bishop Yambasu Schools of Excellence. In addition, all United Methodist teachers will attend in-service training courses during the long vacation every year. Such measures, he said, will remedy the issue of massive failures and students’ reliance on exam malpractices to pass exams. 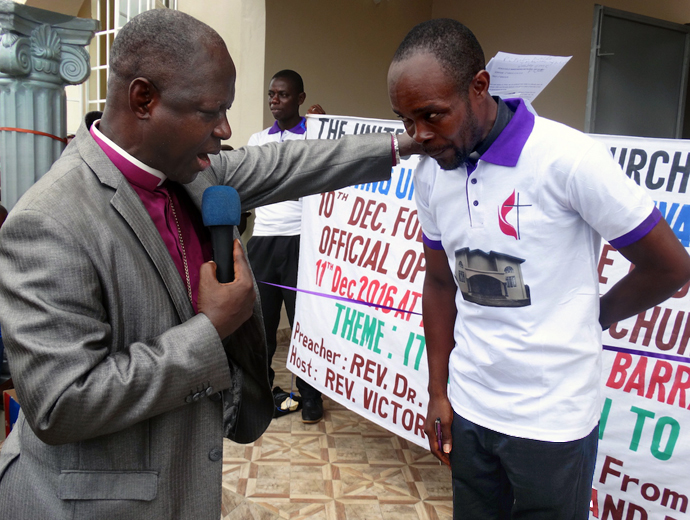 Sierra Leone Area Bishop John K. Yambasu (left) prays for the Rev. Victor Kainboy for his leadership of the church in Pujehun, southern Sierra Leone, in this 2017 file photo. Bishop Yambasu died in a car accident Aug. 16, 2020. The United Methodist University in Sierra Leone, which was founded by Yambasu, graduated the first set of students on Feb. 26. File photo by Phileas Jusu, UM News.

“The church,” Dr Josephus Brimah said, “has to be at the heart of education because it is good to have good degrees. But if you have no moral compass that guides you, it means nothing. That’s why I’m touched by your motto: ‘Excellence, Integrity and Service.’” Brimah is the chief technical and higher education officer at Sierra Leone’s Ministry of Tertiary Education.

He congratulated the graduates as he emphasized the essence of ethics in education. “Ethics should be the guiding principle,” he noted. “In knowledge, you should be humble because humility is restored in ethics, and ethics is the mother of all virtues. All virtues take their rise and footing from humility.”

Stephen N. Senesie graduated as the best academic student with a distinction. “We are pleased,” he said, “because it was like a research-based university. We were exposed to research methods and a whole lot of sources of information. It was a very good exercise, though a tedious one. The teaching staff were great. They would follow up to ensure we understood every bit of what we were taught. That aspect was what I particularly admired because they made sure that nobody was left behind. They were the best.”

He recognized the difficulties. “Ours was more difficult because it is a new institution,” Senesie said. “Most of the facilities one would expect as a student were not available.”

Initially, the university had an internet facility on campus to which Yambasu had subscribed. “Since his demise,” Senesie said, “it has been very challenging for us as students on campus to get access to internet to do research.” Delays in lecturers’ salary payments also affected courses.

The university strives to generate enough funds to cover its running costs. The vice chancellor said he receives some funding from the United Methodist Board of Higher Education and Ministry.

“That funding is restricted to theological training only,” he explained. “We cannot use it to cover other university expenses.”

The university receives some funding from the Sierra Leone Conference, which itself is struggling with budgetary constraints. The sources are not enough to cover the budget of a new and growing university, Carew said.

Pre-conference meetings helped the candidates for bishop in the North Central Jurisdictional Conference make the election process a positive experience, even for the seven candidates who weren’t selected.
Local Church

Aging congregations and expensive buildings are plaguing many churches, but there is an upside. Church leaders are starting to get innovative about how their real estate is used, and that could be the road to a sustainable future.
Mission and Ministry