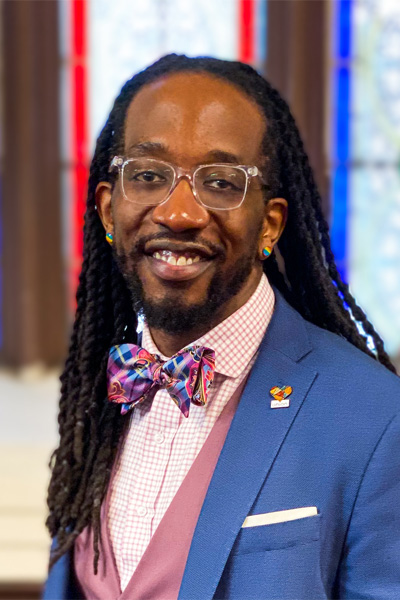 On the surface, the potentially denomination-splitting “issue” facing The United Methodist Church is “homosexuality.” In reality, however, this controversy, this fear, this schism — this “problem” — is about so much more.

At first glance, the conflict appears to be over human sexuality, and whether or not The United Methodist Church will fully include in its life LGBTQIA+ people. LGBTQIA stands for lesbian, gay, bisexual, transgender, queer, intersex, asexual and the “plus” stands for related communities and nonbinary expressions of gender and sexuality.

At the core, what faces the church in 2020 is what faced us at our founding Christmas Conference in 1784: oppression. When the Methodist Episcopal Church came into being at Baltimore’s Lovely Lane, African Americans were largely enslaved and women were not voting citizens of the emerging American republic. The Methodist Episcopal Church was both complicit with and active in the oppression of these groups — and so were each of its denominational successors.

It is possible now, even after decades of the present conflict and more than two centuries of discrimination, to become a church deeply steeped in the liberating Gospel of Christ Jesus of Nazareth, one that embodies — finally — our baptismal vows to reject “evil, injustice, and oppression.”

We are people of faith who believe that all things are possible with the God who loves us into freedom. As Wesleyan expressions of the body of Christ, we must confront the ugly truths of our tradition because Spanish poet and philosopher George Santayana is correct: “Those who cannot remember the past are condemned to repeat it.” Indeed, the true, holistic way forward only comes into view when we fully see and reckon with our shameful past.

We remember. In the beginning, the Methodist Episcopal Church oppressed its black members. And today, there is still active, intentional discrimination in The United Methodist Church. Just as scriptural and theological interpretations were used to greenlight anti-black and anti-woman condemnation 200 years ago, so too are biblical and theological arguments used today in anti-LGBTQIA+ discrimination in God’s holy church.

A historical survey of our Methodist tradition underscores this reality.

The 1972 incompatibility language is introduced in the United Methodist Book of Discipline just four years after the non-geographic, racially segregated Central Jurisdiction was eliminated in 1968 (and three years after the 1969 Stonewall Uprising against police brutality towards LGBTQIA+ people). So, when formal discrimination against African Americans was removed in The United Methodist Church, we replaced it with discrimination against queer folk.

Indeed, 1968 is deeply linked to 1956, when women were finally granted full clergy rights, although they had been integral to the Methodist movement from its inception.

The 1939 merger can be traced directly to the 1844 split over slavery, whereby the Methodist Episcopal Church, South left to practice oppression in “peace.”

We must not forget that in 1833 itinerant preacher Melville Beveridge Cox was appointed as a missionary to Liberia, initiating Methodism’s imperial expansion that reached its global peak in the early 1900s. Colonialism has shaped our global denomination: A church founded in a colony (the United States), borne of the colonizer (Great Britain), has since grown into a worldwide connection through colonialization.

To be sure, this racist, sexist, colonizing history goes back to 1784, when the Methodist Episcopal Church was formed in the bosom of the United States — a country founded on land stolen from indigenous peoples — a newborn nation that did not acknowledge my ancestors as full human beings.

History comes full circle because The United Methodist Church still does not view me — and those who love like me — as full humans deserving of committed, romantic relationship and full Christians worthy of ordination.

The United Methodist Church officially says that I, as a queer pastor, should not be allowed to preach in the sacred pulpit of Union United Methodist Church, which was first occupied by the Rev. Samuel Snowden, a former enslaved African turned abolitionist. David Walker, who penned the pivotal abolitionist text “Appeal to the Colored Citizens of the World” in 1829, was a member of the congregation I now serve. It seems that the denomination has struggled to evolve over the past 200 years.

So I make this appeal. There always has been an oppressing spirit in our Methodist DNA. LGBTQIA+ persons are the latest targets in a long assault against “the other” in Methodism. We must now confront this grotesque and painful history. And with urgency. In the Rev. Martin Luther King Jr.’s 1963 “Letter from a Birmingham Jail,” which calls out gradualists who resisted full integration and encouraged incremental change, Methodists are included: Paul Hardin, bishop of the Alabama-West Florida Conference of the Methodist Church, and Nolan Bailey Harmon, bishop of the North Alabama Conference of the Methodist Church.

As people called Methodists, today, we must face the fact that different Christianities have existed within the Methodist Church, some of which have allowed the rationalization of violence through theologies that literally enslaved other human beings and sanctioned institutional racism, sexism, ableism, classism, colonialism and heterosexism. Only when we own up to this past, might we — the baptized people of God — be redeemed of our sin. And with repentance, there is possibility for transformation.

Might we now imagine a church that is non-complicit, non-complacent, non-conforming and non-compromising with these “-isms?” Might we step into a faith-full future that is irresistible because we are all free to be the beautiful be-loved of God that we are created in God’s image to be? Might we “become again what we never were” and always hoped to be — an anti-oppression church? (Michel Foucault, “The Hermeneutics of the Subject: Lectures at the Collège de France, 1981-1982”)

It is possible to be such a liberative church if we spend time at what Emilie Townes describes as “sites of memory” — and we re-member. Let us, we people of hope, not repeat our oppressive past in this present moment. “This hope is one that pulls the promise of the future into the present and places the present into the dawn of a future that is on the rimbones of glory.” (Emilie M. Townes, “Womanist Ethics and the Cultural Production of Evil”)

May we find courage to seek future liberation from past oppression.  And may God be glorified.

The Rev. Jay Williams, Ph.D., is the lead pastor of Union Church Boston, The United Methodist Church’s first historically black reconciling congregation, and heads the New England Conference’s delegation to the 2020 General Conference. He is a leader of UM-Forward, a collective of United Methodist laity, clergy, and scholars who envision liberation: anti-oppression, human flourishing, and empowerment of the marginalized.