Berthia Mugwagwa, 20, knew exactly which university she wanted to attend to make her dream of running a large farm come true.

“Africa University has the best agricultural university in Africa,” she said. “I told my mom it was my only option.” Mugwagwa is enrolled in the College of Health, Agriculture and Natural Sciences.

Family finances were difficult. Her father is disabled, so one of his younger brothers agreed to pay her school fees.

In an interview during the recent celebration of United Methodist-related Africa University’s 30th anniversary, Mugwagwa tearfully said her uncle died at his job in South Africa just a few days before.

“I was crying. I thought I would have to drop out,” she said. School officials assured her they would find someone to sponsor her with a scholarship.

“I am so grateful,” she said. “My school fees are a lot, and my mom would not be able to pay.”

A primary objective of Africa University is to educate leaders for the continent, Salley said.

“Of the more than 11,000 alumni, more than 90 percent are in leadership roles on the continent of Africa,” he added. Alumni come from 32 countries.

After the Sunday worship service on Oct. 23, Mugwagwa and a group of scholarship recipients spoke to visitors and donors from the U.S. who came to celebrate the milestone for the university in Mutare, Zimbabwe.

One donor, the Rev. Jennifer Jue, is pastor of Brookside and Trinity United Methodist churches in Jackson, Michigan. She brought another $10,000 donation for an endowed scholarship she established in 2007 for a female theology student.

“The students I talked to mentioned the importance, impact and uniqueness of Africa University to bring together persons from different countries throughout Africa,” Jue said.

She was inspired to set up an endowed scholarship fund after she heard the Rev. Beauty Maenzanise, then dean of Theology at Africa University, give a presentation on the school.

“I wanted to begin an endowed scholarship at Africa University because I believe that Africa University provides quality higher education that equips and empowers leaders of many different countries of Africa,” Jue said. “Ethical leaders have the potential to bring peace and justice to their countries, government and institutions.” 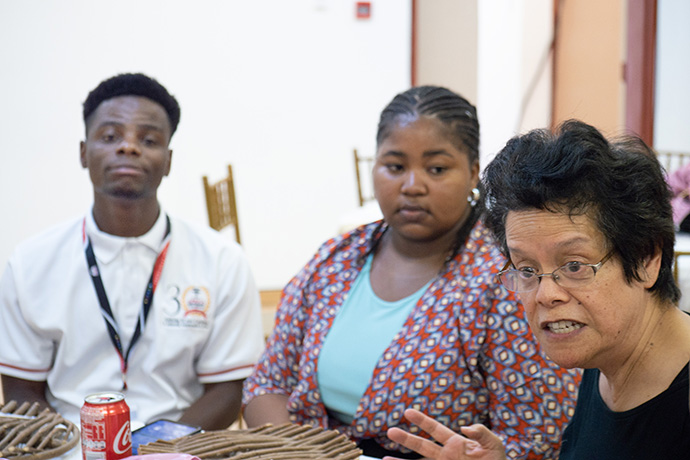 The Rev. Jennifer Jue (right) of the Michigan Conference talks with scholarship recipients at Africa University in October. Jue said the students talked about the unique way the university brings together people from different countries throughout Africa. Jue has started an endowed scholarship for a female student in the theology department. Photo by Kathy L. Gilbert, UM News.

“The understanding is that the gift amount is never touched,” said Andra Stevens, director of communications and creative services for the Africa University Development Office. The initial gift accrues interest, and awards are made from earned interest income after three years. School fees are $5,765 annually for a year of study.

Another scholarship recipient, Belinda Numbi, 22, is in her senior year at AU. Enrolled in the College of Business, Peace, Leadership and Governance, she is studying in the department of business sciences.

“I am the firstborn of eight children,” she said. “I want to run a company or a business in order to support my siblings. I have a lot of responsibilities.”

Numbi added, “I have never met my sponsor. I would be so grateful to say ‘thank you.’ I pray for them. May God bless them.”

During the anniversary celebration, Claflin University president Dwaun Warmack and his family donated $10,000 for an endowed scholarship fund. Located in Orangeburg, South Carolina, Claflin University is one of the 11 historically Black schools and colleges in the U.S related to The United Methodist Church.

The 80-plus visitors that were part of a charter group from the U.S. took up a special collection during their time in Africa. They gave $6,300 in direct scholarship aid in honor of the Africa University Development Office.

Another $3 million has been given to endow scholarships as part of the U.S.-based endowment’s celebration.

The 30th anniversary also marked the beginning of the African endowment for scholarships, Salley said. The original goal was to raise $100,000.

“We surpassed that goal,” Salley said. “It is a dream come true.”

Other Zimbabwe businesses and many individual gifts from alumni, faculty and staff donated to support the Africa-based scholarship endowment effort.