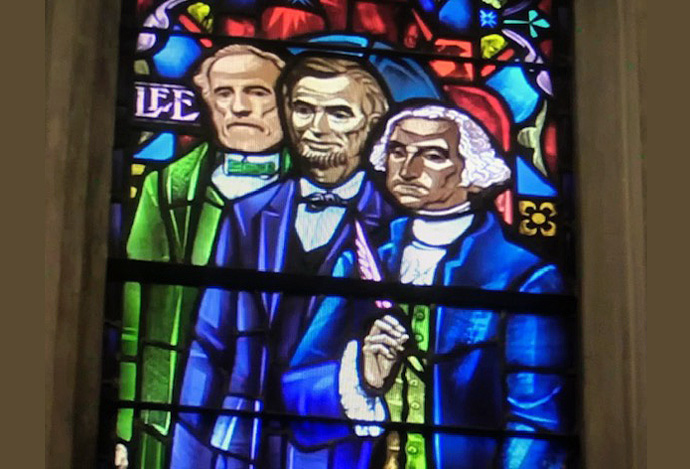 For 60 years, Lee has been grouped with George Washington and Abraham Lincoln in a Cathedral of the Rockies window devoted to U.S. history, but the church’s board has decided the Confederate general’s image will be taken out this summer.

A board statement says in part:

“We believe this section of our window to be inconsistent with our current mission, to make disciples of Jesus Christ for the transformation of the world, as well as the banner which hangs above our doors espousing, ‘All means all — you are welcome here.’

“Further, such display is a barrier to our important work resisting evil, injustice and oppression. Symbols of white supremacy do not belong in our sacred space.”

The board promised an image of a “yet to be determined person of color” will replace Lee. 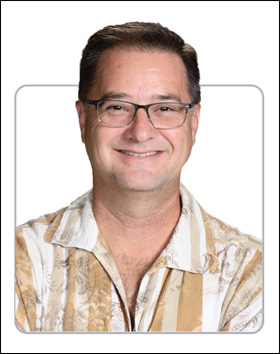 The Rev. Duane Anders
Photo courtesy of The Cathedral of the Rockies
“She was elected in Boise, and she was consecrated in this church, so we’ve got a connection,” Anders said.

The Cathedral of the Rockies began a focus on racial justice in 2015, after a white supremacist shot and killed 9 people attending Bible study at Emmanuel A.M.E. Church in Charleston, South Carolina.

What to do about Lee’s image has been part of Cathedral of the Rockies’ discussions. Anders said church leadership had decided to put a plaque under the window acknowledging complicity in systemic racism.

But the rush of church business kept that from getting done, Anders said.

It took this year’s highly publicized killings of African Americans to prompt a board decision within the last week to remove the Lee image.

“The recent deaths of George Floyd, Ahmaud Arbery and Breonna Taylor brought long-overdue urgency to our discernment process,” the board’s statement says. “We are reminded of our privilege. We have waited too long.”

The board’s statement appears under the headline “We repent for our participation in white supremacy” and the church’s Facebook page currently carries a “Black Lives Matter” banner.

The Cathedral of the Rockies, also known as Boise First United Methodist, is one of the largest churches in The United Methodist Church’s Western Jurisdiction, with membership at 2,800 and weekly attendance at 1,367, according to 2018 denomination records.

The church’s current main sanctuary dates to 1960, and the stained glass is one of its outstanding features. The glass tells the story of Christian history, with images of a range of figures, including the apostle Paul, St. Francis of Assisi, Martin Luther and John Knox.

The glass was commissioned in 1958 by the church pastor, the Rev. Herbert E. Richards. In a 1960 letter, he wrote:

“We have included also a patriotic theme in one lancet which includes George Washington, Abraham Lincoln and Robert Lee. We have a strong southern influence here in Boise.”

Current church leaders — in a document titled “Why is Robert E. Lee in our church’s windows?” — noted that in the 1950s, in the runup to the Civil War centennial, the United Daughters of the Confederacy and Sons of Confederate Veterans were active in installing historical markers and “in changing the narrative of the war” to downplay slavery’s atrocities.

Anders said Richards was all about inclusivity and meant well with the stained glass that included Lee.

“It really was an attempt to say, ʽThis is Christian unity,’” Anders said. “Now, it was totally blind to the systemic racism of the 1950s and ‘60s that was putting up Confederate monuments.”

“Decisions like these, you recognize, for one crowd of people will never be enough and for another will be a bridge too far,” Anders said.

Anders said the Lee image should be removed by the end of August and may be replaced by clear glass until the church decides on a replacement.

There’s currently debate about whether the 10 U.S. military bases named for Confederate generals should be renamed.

Gov. Ralph Northam of Virginia has announced plans to remove a Lee statue on Richmond’s Monument Avenue, though a judge has temporarily blocked that. The removal is supported by the Rev. Robert W. Lee IV, a descendant of the general and a Cooperative Baptist Fellowship minister who grew up a United Methodist and studied at Duke Divinity School.

Bishop Thomas J. Bickerton used his first address as Council of Bishops president to call on backers of a breakaway denomination to stop mischaracterizing The United Methodist Church.
Church Leadership