More than 400 people have died from the Ebola virus in eastern Congo since the epidemic began in August. The death toll includes more than 50 United Methodists.

According to the World Health Organization and latest Ministry of Health report, there have been 405 confirmed deaths and 54 probable deaths, with 256 people cured.

Despite efforts by the government and its partners and prevention activities carried out by The United Methodist Church, the epidemic is the second largest on record and the deadliest the country has seen. The worst Ebola outbreak took place between December 2013 and April 2016, when the hemorrhagic fever killed 11,310, mostly in Sierra Leone, Liberia and Guinea. 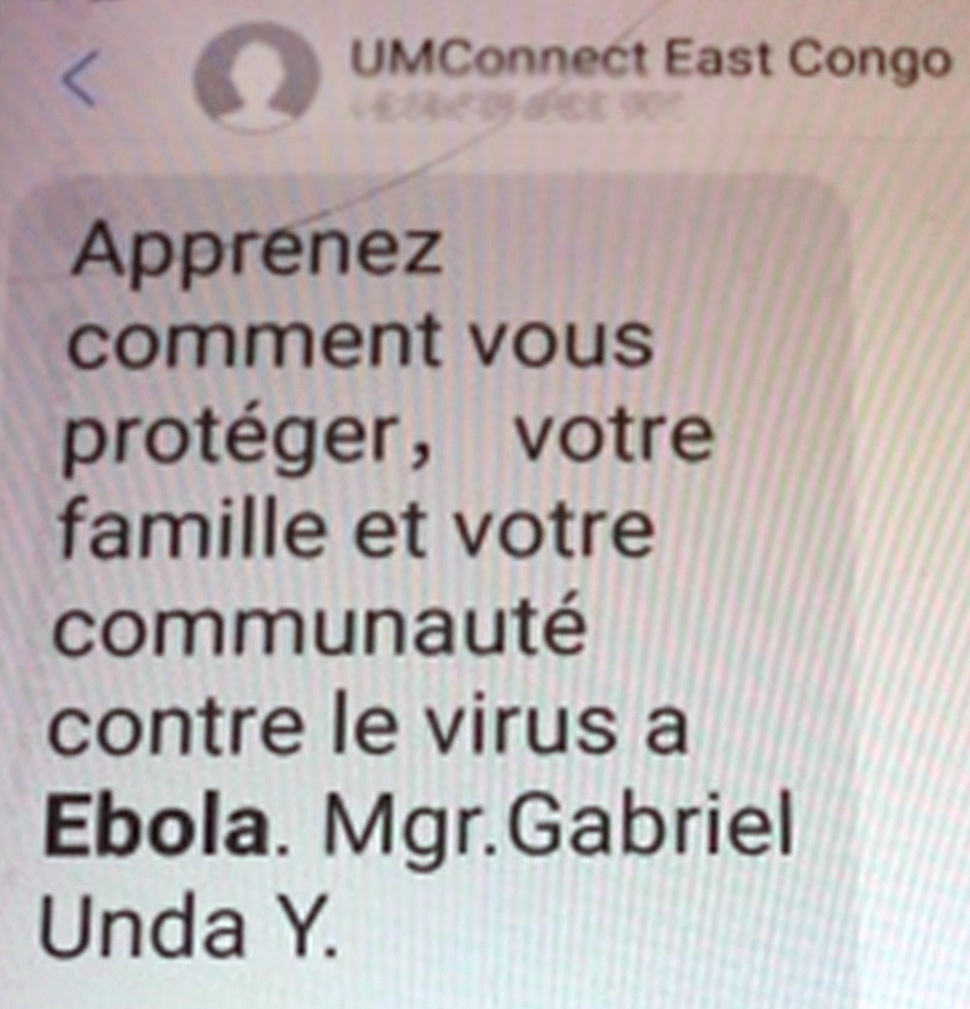 Recognizing the magnitude of the crisis, United Methodist delegates to the church's annual health council in December “resolved that health coordination can double efforts and intensify prevention activities,” said Félicien Litalema, district superintendent of Kisangani II in the Oriental and Equator Conference.

“Participants joined dozens of others trained in 2018 in neighboring Maniema Province as part of the preventive fight against Ebola virus disease with the financial support of Global Health,” a unit of the United Methodist Board of Global Ministries.

“As a church,” said Bishop Gabriel Yemba Unda, Eastern Congo Episcopal Area, “we cannot be silent in the face of this Ebola epidemic, which continues to kill people in eastern DRC. We will focus on preventive measures in the surrounding areas and districts of Beni — Goma, Rutshuru, Bukavu, Uvira and Bunyakiri — to curb the spread of this disease.”

More than 60,000 people have been vaccinated against Ebola, and Congolese Minister of Health Oly lIunga Kalenga credited the vaccine, used for the first time on a large scale, with preventing “thousands of deaths.”

In Beni — the epicenter of the epidemic — the Rev. Issanda Walubila, Uvira District superintendent, and his pastors encourage local communities and the faithful to focus on better handwashing techniques. In Uvira, United Methodists use wash kits placed in front of each local church and United Methodist school to curtail the outbreak.

Donate to the Abundant Health Advance #3021770, which addresses global health and aims to increase access to health interventions in economically vulnerable communities.

In Goma, North Kivu, prevention-awareness campaigns at the grassroots level are carried out by community relays and religious leaders trained in each local church.

Béatrice Anunga, a religious leader who works at the United Methodist Majengo Health Center in Goma, gave thanks for the Global Ministries partnership and its support of the emergency Ebola-prevention project. Newly acquired thermometers, she said, “allow us to take the temperature of the patients who arrive at our health center.”

Dr. Marie Claire Manafunda, an officer of the Maternal and Child Health Program in Eastern Congo, talked to several pregnant women in Bukavu on the signs and prevention of Ebola.

Chief medical officer of the Ibanda Health Zone, Dr. Cubaka Muharanganyi, commended The United Methodist Church, noting, “Since the emergence of the Ebola virus, the United Methodists have not stopped working in the preventive fight against this epidemic.”

The United Methodist Church recently built an orphanage in Kindu in the East Congo Conference to provide shelter for orphans formerly housed in foster homes.