Editor's note: This story has been updated to note the different dates clergy under complaint are meeting with the bishop, and to add comments from James C. Walker, who defends the church's teachings regarding same-sex behavior.

The fallout continues from the forced resignation of an openly gay African Methodist Episcopal pastor who was serving a growing United Methodist congregation in rural Michigan.

Dozens of United Methodists taped petitions to the door of the bishop’s office late July 28 in a show of support for the pastor, the Rev. Benjamin David Hutchison. The petitions urged the denomination to “Stop the Harm” against lesbian, gay, bisexual, transgender and queer individuals.

Meanwhile, complaints are moving forward against nine United Methodist clergy who helped officiate at Hutchison’s wedding on July 17 in defiance of church law. Michigan Area Bishop Deborah Lieder Kiesey plans to meet with most of the clergy Aug. 31 to begin the supervisory process, said the Rev. Michael Tupper, one of the pastors under complaint.  Because of a scheduling conflict, Tupper will meet the bishop on Aug. 24.

The situation is the most recent flare-up in the global denomination’s ongoing debate over its stance on homosexuality and ministry with gays and lesbians.

“I grieve for this painful place in which we currently find ourselves in The United Methodist Church,” Kiesey said in a July 28 statement. “As we have done in the past, I trust that with God’s help, we will find our way through these difficult times. I ask for your prayers for people on all sides of these issues.”

The Book of Discipline, the denomination’s law book, since 1972 has proclaimed that all people are of sacred worth but that the practice of homosexuality is “incompatible with Christian teaching.”

Only General Conference, the denomination’s top lawmaking body, can change the church’s stance. The assembly next meets May 10-20, 2016, in Portland, Oregon. 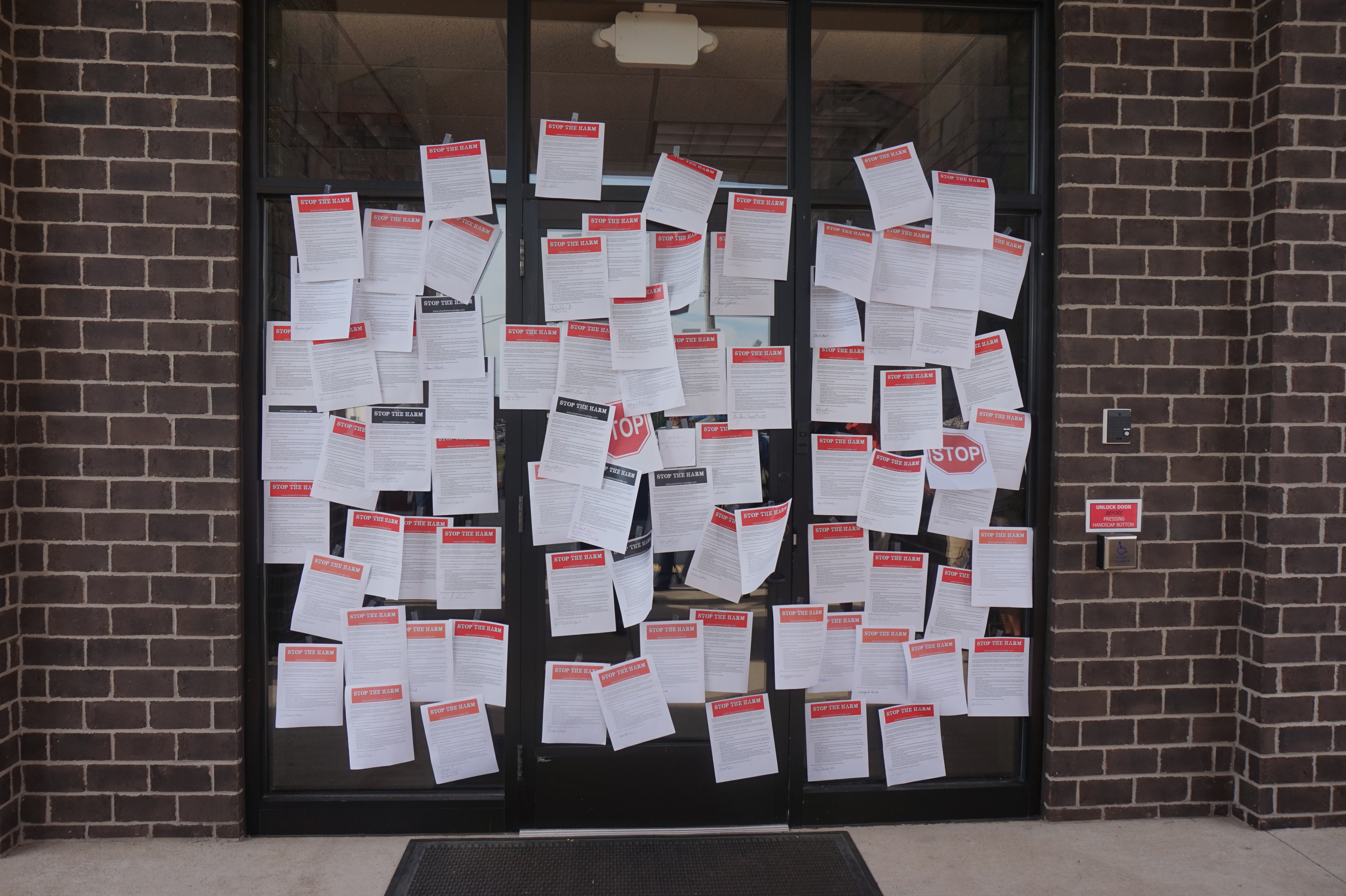 Petitions supporting changing the church’s stance on homosexuality are taped to a bishop’s door  in a demonstration meant to invoke Martin Luther’s famous posting of the 95 Theses to the Wittenberg Castle Church door. Photo courtesy of Reconciling Ministries Network

Tupper, pastor of Parchment (Michigan) United Methodist Church, was one of the organizers of the July 28 demonstration and is one of the clergy under complaint. He signed Hutchison’s Michigan marriage license.

“We’re trying to do our part to bring light to this injustice,” he said, “and encouraging our denomination to see what they are doing to gay people.”

Tupper said the protesters by posting petitions on the bishop’s glass door hoped to invoke the memory of Martin Luther, who according to tradition nailed his famous 95 Theses to the Castle Church in Wittenberg, Germany. “Where I’m coming from, to use Martin Luther’s phrase, is ‘Here I stand; I can do no other. God help me,’” Tupper said.

He is also the coordinator of West Michigan Reconciling United Methodists, which advocates changing the church’s policy. He said more than 200 United Methodists have signed the group’s pledge to “Stop the Harm.”

The Rev. John Grenfell Jr., a board member of Good News, which advocates for keeping the church’s stance, has a different take on the dispute. He is a retired pastor and district superintendent in the Detroit Conference, which shares the same bishop as West Michigan United Methodists.

The question, to him, is whether denominational leaders will follow the Discipline with integrity. As it stands now, the Book of Discipline's rules governing clergy are clear, he said.

"I think it behooves the bishop and her cabinet to explain their actions of accountability," he said.

He noted that under church law, the goal of the supervisory process is to try to reach "a just resolution with healing and reconciliation in the Body of Christ." Church trials are a last resort.

"Our biggest problem right now is: We our not sure whose reconciliation we are seeking," he said. He sees the complaint process as a choice between God's call to holy living or a human's desire to have his or her cause approved.

James C. Walker is a leader of Impact, a Michigan group that aims to defend historical Methodist teachings and also supports the church's position on homosexuality. He said the pastors who participated in Hutchison's wedding should have their clergy orders revoked. "My wife told my 3 year old daughter not to go in the street.  She disobeyed.  She was punished and it never happened again," he said.

Because of confidentiality rules, conference officials say, the district superintendents bringing the complaints are not at liberty to discuss the complaint process.

The West Michigan Conference, where Tupper serves and Hutchison was previously pastor, in recent years has pushed to change the way the church addresses homosexuality.

Conference members at their annual meeting in June voted to support General Conference legislation that would remove prohibitive language that makes it a chargeable offense under church law for clergy to be “self-avowed practicing homosexuals” or to officiate at same-sex weddings.

The Connectional Table, which coordinates the denomination’s ministry and resources, is proposing the legislation, and the Rev. Kennetha Bigham-Tsai, a district superintendent in the West Michigan Conference, is one of the legislation’s drafters.

In 2014, West Michigan Conference voters supported a resolution that said the conference “desires a cessation of church trials for conducting ceremonies which celebrate homosexual unions or performing same sex wedding ceremonies.” Instead, the conference recommended continuing “a process of theological, spiritual and ecclesiastical conversation."

A complaint against Tupper for officiating at his daughter’s same-sex wedding reached a resolution last year in which he faced no penalty. In this new case, he says he is willing to face a church trial and risk losing his clergy credentials, if it will help persuade fellow United Methodists to change church policy.

“I’m doing this mainly for God because I do believe that’s what God wants me to do,” he said. “But I’m also doing it for my daughter and people like daughter.”

However, Tupper quickly added he does not speak for the other clergy under complaint. Most have chosen not to reveal their names in public, at this point.

Hutchison, for his part, said he has received “astronomical” support from United Methodists and other Christians as far away as India and the United Kingdom. He also is receiving invitations to speak and preach at United Methodist, Episcopal and United Church of Christ congregations across the United States.

Members of Cassopolis United Methodist Church, where he served as pastor from January 2013 to July 13 of this year, are still trying to discern their next move.