They each had their faith shaken in a powerful storm. During a dark night of the soul, they both found assurance of God’s grace in a reading of Paul’s Epistle to the Romans.

Those are just two similarities in the life stories of John Wesley, Methodism’s founder, and Martin Luther, arguably the seminal figure of the Protestant Reformation.

Without Luther, it’s quite possible no Wesleyan movement would have arisen two centuries later.

In fact, hearing Luther’s preface to Romans helped spur Wesley’s spiritual awakening on the night of May 24, 1738.

“About a quarter before nine, while the leader was describing the change which God works in the heart through faith in Christ, I felt my heart strangely warmed,” Wesley wrote in his diary. “I felt I did trust in Christ, Christ alone for salvation … .”

A group of 17 United Methodists visited Luther’s home of Wittenberg to further explore the connections between Luther and Wesley and celebrate the ecumenical ties among today’s Lutherans and Wesleyans.

The United Methodist group included six bishops from Germany, Zimbabwe, the Philippines, and the United States, as well as four staff members from the bishops’ Office of Christian Unity and Interreligious Religious Relationships, the denomination’s ecumenical arm.

At the invitation of the Lutheran World Federation, the United Methodists also helped plant a tree in the new Luther Garden — part of the preparations for the 500th anniversary of the Protestant Reformation in October 2017.

“We are convinced we have one root, and Martin Luther brought this to the attention of the Christians in his time,” Germany Area Bishop Rosemarie Wenner preached during the tree-planting service. “That one root is Jesus Christ the Lord.” 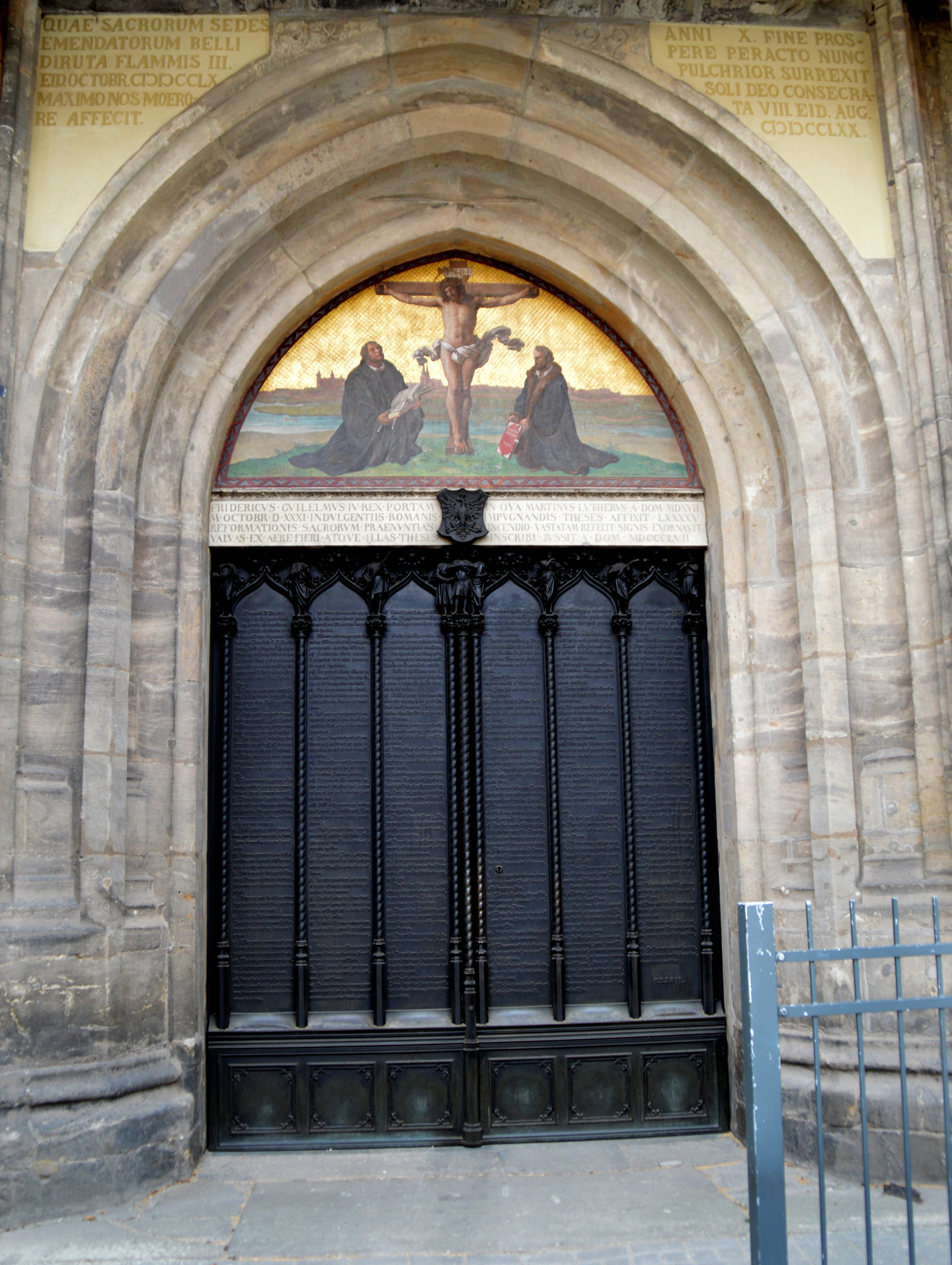 The door at Wittenberg’s Castle Church where Martin Luther reportedly posted his 95 Theses on Oct. 31, 1517, launching the Protestant Reformation. At the time, the door served as a sort of university bulletin board. Today, his theses are engraved in the door. Photo by Klaus Ulrich Ruof

Wesley, after a storm nearly sank his ship on his way to the colony of Georgia, ended up having a rather stormy time during his American sojourn.

Like Wesley, Luther did not have a particularly auspicious start to his ministry.

He vowed to take the monk’s cowl after a lightning bolt jolted him to the ground, and eventually joined the theology faculty at the fledgling Wittenberg University.

Still, the young monk wrestled with a troubled conscience and anger at what he perceived as God’s harsh judgment. As he later recounted, he experienced a conversion when he meditated on Paul’s writings, especially Romans 1:17: “For in the gospel the righteousness of God is revealed — a righteousness that is by faith from first to last, just as it is written: ‘The righteous will live by faith.’”

He came to believe that Christ justified humans by faith alone — a theological insight that put him on a collision course with church leadership.

In the 16th century, the Roman Catholic hierarchy taught that people could get right with God mainly through external means such as by visiting relics, making pilgrimages and paying for Masses. All of these activities cost money that went to church leaders’ coffers.

The practice that really irked Luther was the sale of indulgences — certificates indicating the remission of sins and sometimes marketed as a way out of purgatory.

Luther saw this as corrupt and unbiblical. So, on Oct. 31, 1517, he challenged the practice by posting his “Disputation on the Power and Efficacy of Indulgences,” better known as the 95 Theses. Tradition holds that he nailed the document to Wittenberg's Castle Church door, which was used as a university bulletin board at the time (think of it as a sort of 16th century Craig's List).

What Luther intended as a conversation starter ended up doing far more. It launched the Protestant Reformation and transformed western Christianity.

The difference Luther made

Luther was not the first person to call for reform in the Catholic Church. But you might say he was the first to go viral. The printing press, the nascent technology of the time, spread Luther’s ideas across Europe much the same way the Internet spreads ideas today.

How do you celebrate 500 years since the start of the Protestant Reformation?

The Lutheran World Federation has done so by inviting churches and denominations around the globe to each plant a tree in a new garden around the city center of Wittenberg — 500 to be exact. So far, churches of varied denominations, including Catholic and Orthodox, have planted 248 trees.

“For the anniversary, we decided we should not celebrate a single person,” said the Rev. Hans W. Kasch, director of the Luther Garden project, “but we should commemorate the history of the Reformation and its contribution toward a discussion of the church of the future.”

The tree will offer a visual testimony to the world of the common roots and spiritual growth of all branches of Christianity, he said. The hope is that each church and denominations that participates will then plant a tree or trees in their own areas.

Luther is often quoted as saying: “Even if I knew the world was going to end tomorrow, I would plant a tree today.” Historians doubt he uttered those words but they are in keeping with his life-affirming theology.

The symbolism of a growing tree resonates with today’s United Methodists.

“We have blended activities of the church with planting,” the bishop said.

He also managed to survive, thanks to his powerful ally Saxony’s Prince Frederick, even after he refused to renounce what the church declared heresy.

Luther went on to translate the Bible from the original Greek and Hebrew into German — the language of the common people.

He also introduced another theological idea that still influences United Methodists. Luther challenged the church teaching that taking priestly vows was God’s highest calling. Instead, he taught that every person — butcher, baker or homemaker — is called by God.

So when United Methodists say that every person — whether lay or clergy — is called to ministry, they are echoing Luther.

Wesley found a lot to appreciate about Luther but also vehemently disagreed with the church reformer. “Doubtless he was a man highly favoured of God, and a blessed instrument in his hand,” Wesley wrote of Luther in 1749. “But O! what pity that he had no faithful friend! None that would, at all hazards, rebuke him plainly and sharply, for his rough, untractable spirit, and bitter zeal for opinions, so greatly obstructive of the work of God!"

Wesley’s main argument with Luther was over the idea of sanctification. Wesley believed with God’s guidance, humans could achieve Christian perfection during life.

Luther also believed in sanctification but put greater emphasis on justification by faith. Luther believed that even with the Holy Spirit, humans could not achieve Christian perfection in life.

Still, this theological difference is not enough to keep Lutherans and United Methodists from collaborating in mission.

Atlanta Area Bishop B. Michael Watson, who first suggested the United Methodist visit to Wittenberg, said he was delighted to visit landmarks in Luther’s life and participate in the Luther Garden tree planting. He will be the next Council of Bishops ecumenical officer, starting in September 2016.

“I’m glad to be a part of it because it shows the history of the Protestant church,” he said, “and it also shows that churches of all denominations come together to rejoice and celebrate that history.”

Hahn is a multimedia news reporter for United Methodist News Service. She was baptized and confirmed in what is now the Evangelical Lutheran Church in America. Contact her at (615) 742-5470 or [email protected]