On April 1, 2016, a desperate situation turned deadly when the Philippines government security forces fired on a peaceful demonstration of 5,000 farmers who were asking for rice.

The hungry people got bullets from the government, but were offered compassion and shelter by Bishop Ciriaco Q. Francisco and other United Methodists of Spottswood Methodist Mission Center. 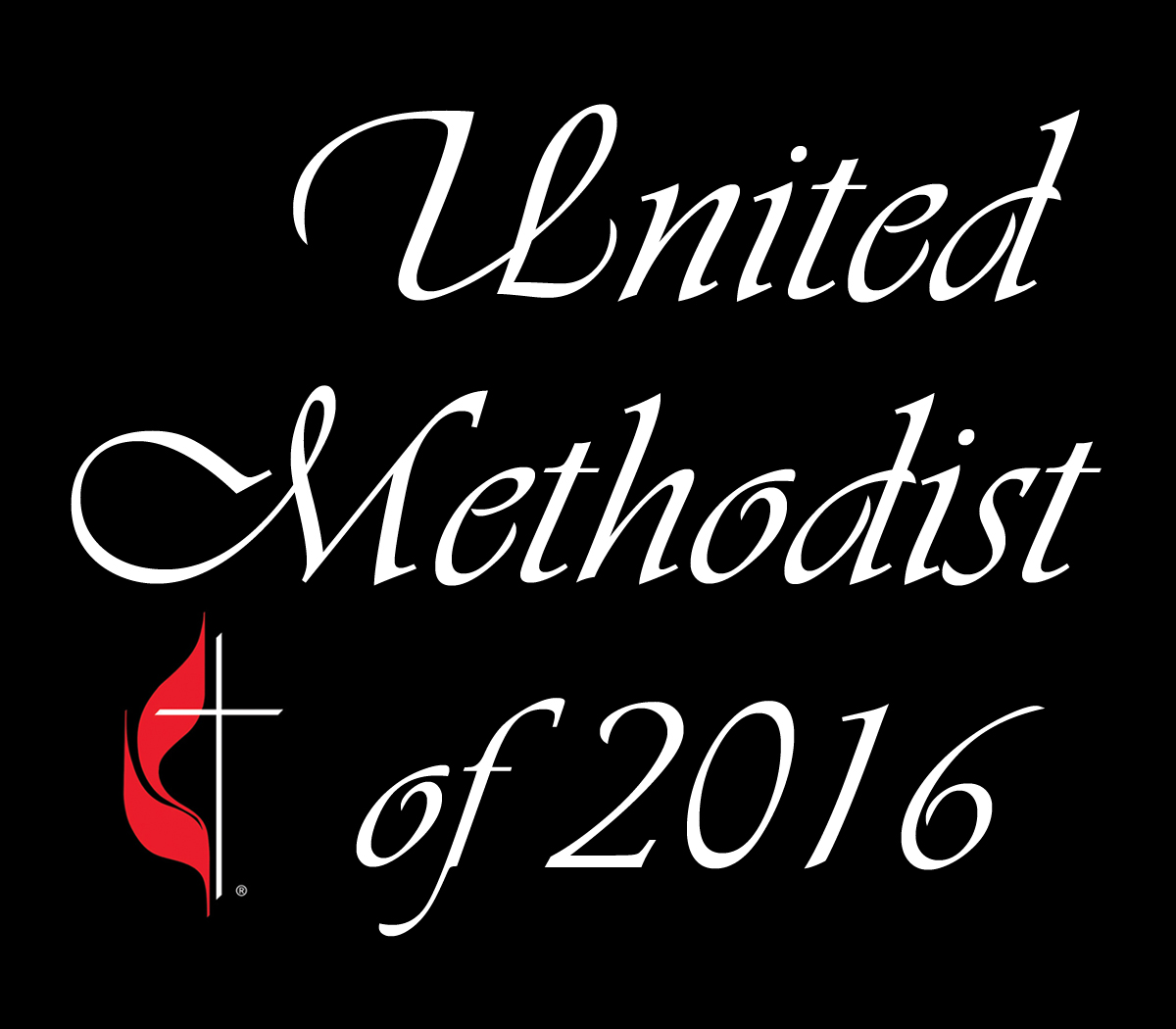 How we chose United Methodist
of the Year

As The United Methodist Church struggles to find common ground on theological differences and church unity, United Methodist News Service wanted to honor the work of making disciples of Jesus Christ for the transformation of the world — something that happens daily in the denomination.

One way we chose to do that is to honor a United Methodist of the Year for 2016.

We sought nominations from United Methodist communicators, and News Service staff made the selection.

In keeping with John Wesley’s belief that the world is our parish, we chose someone whose actions furthered the mission of the church and benefited people outside the denomination.

Our unanimous choice was Bishop Ciriaco Q. Francisco, who currently oversees the Davao Episcopal Area in the Philippines.

The bishop’s decision to offer sanctuary to the starving families put him in danger and he was threatened with arrest.

He was defiant in the face of criticism and danger.

“It is never a sin when poor farmers demand food, but it is a sin to deny them food,” he said in April.

The protesters were blocking Quezon Boulevard, a major road that runs in front of the United Methodist center. The Spottswood Methodist Mission Center, in Kidapawan City, in Mindanao, Philippines, is home of the episcopal offices of the Davao Episcopal Area.

When the violence broke out, protesters poured into the Methodist center and the compound was surrounded by police.

The province of Cotabato, where the farmers live, was under a “state of calamity” due to El Nino phenomenon, a weather condition that left crops destroyed. When a state of calamity is declared, funds should be released to the farmers, said Francisco.

The indigenous farmers, including Lumads, were starving and were asking for 15,000 sacks of rice.

“The farmers gathered for three days in front of the National Food Authority warehouse hoping the governor (Emmylou “Lala” Taliño-Mendoza) would listen to their cries,” Francisco said. “But her heart was callous and she did not listen.”

Francisco testified before two senate hearings about the incident. He spoke of the ministry of The United Methodist Church in offering sanctuary to all people whose lives were in danger and in need of a place of refuge.

He testified that police blocked church members from entering or leaving the church and held up food donations.

No charges were filed against the bishop or the church, however the governor was suspended, the ground commander was relieved of his duties, and another military officer who was inside the church grounds was transferred.

Many of the farmers were persecuted and arrested, but they have filed charges and their cases are pending, Francisco said. 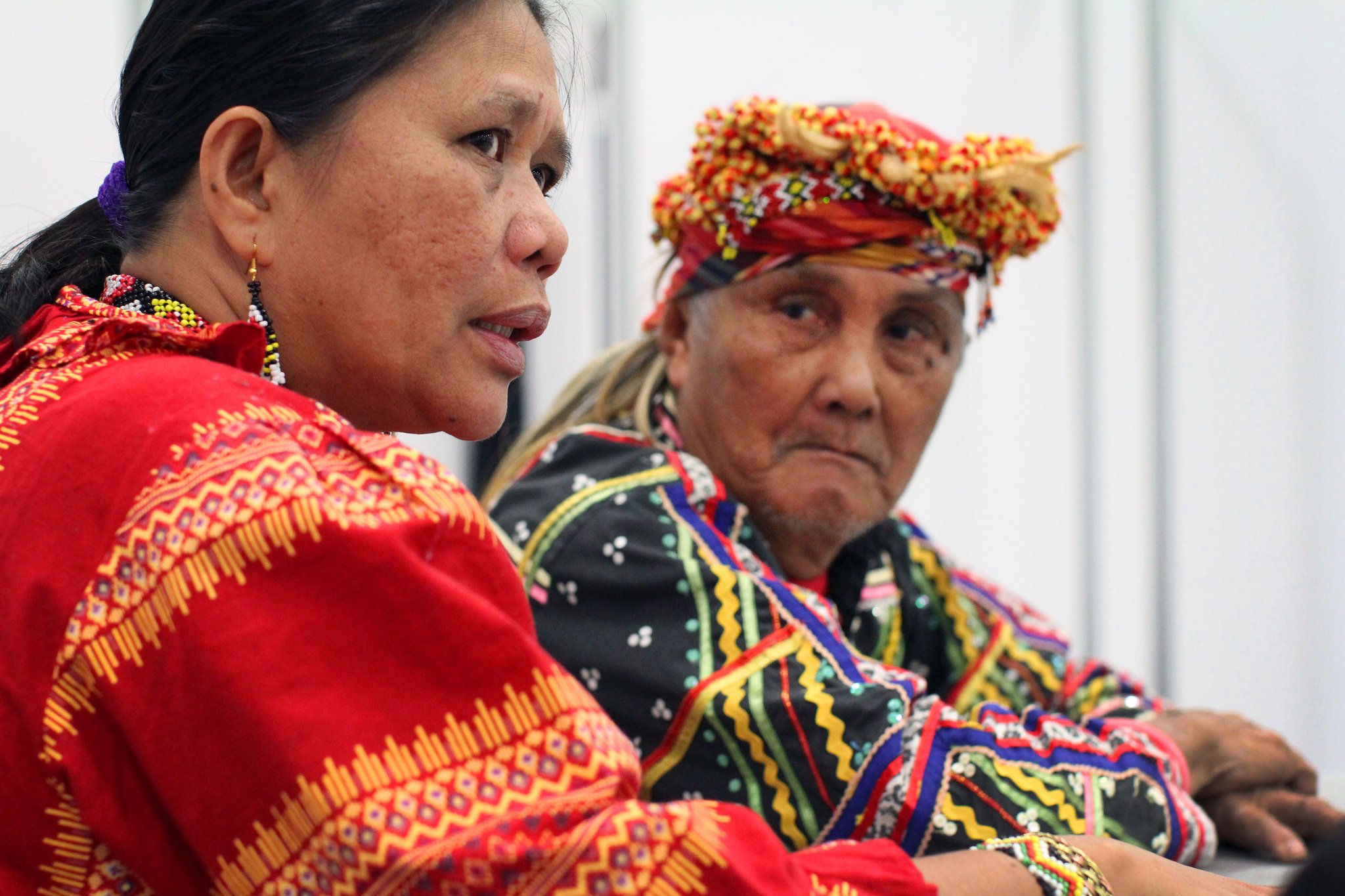 Norma Capuyan and Monico Cayon, indigenous leaders from the island of Mindanao in the southern Philippines, answer questions in the news area at the 2016 United Methodist General Conference at the Oregon Convention Center in Portland. Both shared experiences of discrimination and are part of the Lakbay Lumad USA tour. Photo by Kathleen Barry, UMNS.

“It is risk-taking mission and service when you support the farmers,” Francisco said. “Your ministry doesn’t end in the street, but you are with them to defend them and support them when their lives are in danger. You are with them in their struggles because they are helpless, hopeless and powerless.”

Among the protesting farmers were Lumads, indigenous people who have been the victims of genocide and human rights violations for many years.

A small group of Lumads attended the 2016 United Methodist General Conference, the denomination’s top lawmaking assembly, in Portland, Oregon, just a month after the incident in the Philippines.

“They were compelled to protest because everyone was starving, especially the children,” said Capuyan. Norma Capuyan, chair of an indigenous group advocating for the farmers, said whole families were part of the protest.

“Children are hunting for rats. At night, mothers gather stones from the water and boil them as soup for their crying children. The stone tastes a little like fish and it makes the children comfortable enough to sleep.”

Because of overwhelming support from people all over the country, the farmers did receive rice from non-government organizations, private individuals and religious organizations, Francisco said. Some local government units released their calamity funds to support the farmers.

Francisco said the farmers have planted corn, rice and vegetables.

“What they need is continuous support of the government to afford agricultural inputs, irrigation and machineries to make their farming productive,” he said. 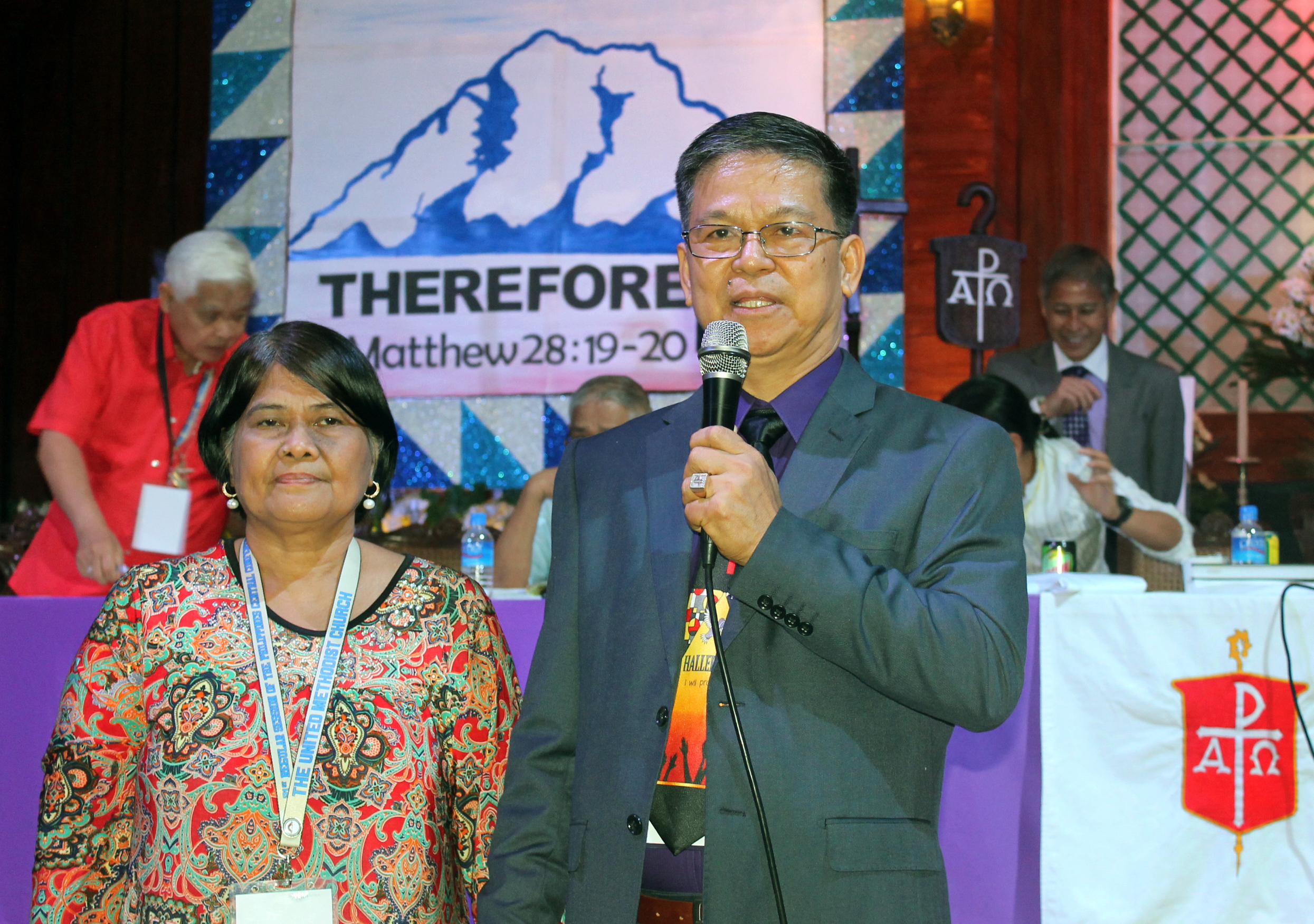 Bishop Ciriaco Q. Francisco, accompanied by his wife, Restetita Victoria, spoke Dec. 2 to delegates at the Philippines Central Conference after his re-election as a bishop in The United Methodist Church. Photo by Gladys Mangiduyos, UMNS.

Francisco was elected to the episcopacy in 2012 and re-elected on Dec. 2, 2016. He currently serves in the Davao Area.

Challenges in the Davao Area during the past four years included responding to two major typhoons, including Typhoon Haiyan; a 7.2-magnitude earthquake in Bohol; a bombing in the night market in Davao City and other acts of political violence, including the Kidapawan massacre in front of Spottswood Methodist Mission Center.

Francisco uses Luke 4:18-19 to urge United Methodists everywhere to speak the truth when they see injustices done to the poor and marginalized.

“Let us live to the standard of ministry set by Jesus. This is the call to every United Methodist.”