A United Methodist Church compound is giving sanctuary to 4,000 farmers and indigenous people after a protest for food relief turned deadly on April 1.

Three protesters were killed and more than 100 injured when security forces fired on the crowd blocking a major highway. Protesters poured into the Spottswood Methodist Mission Center for refuge and the compound is now surrounded by police. Police conducted a search of those at the Spottswood Methodist Mission Center on April 2 but no guns were found. 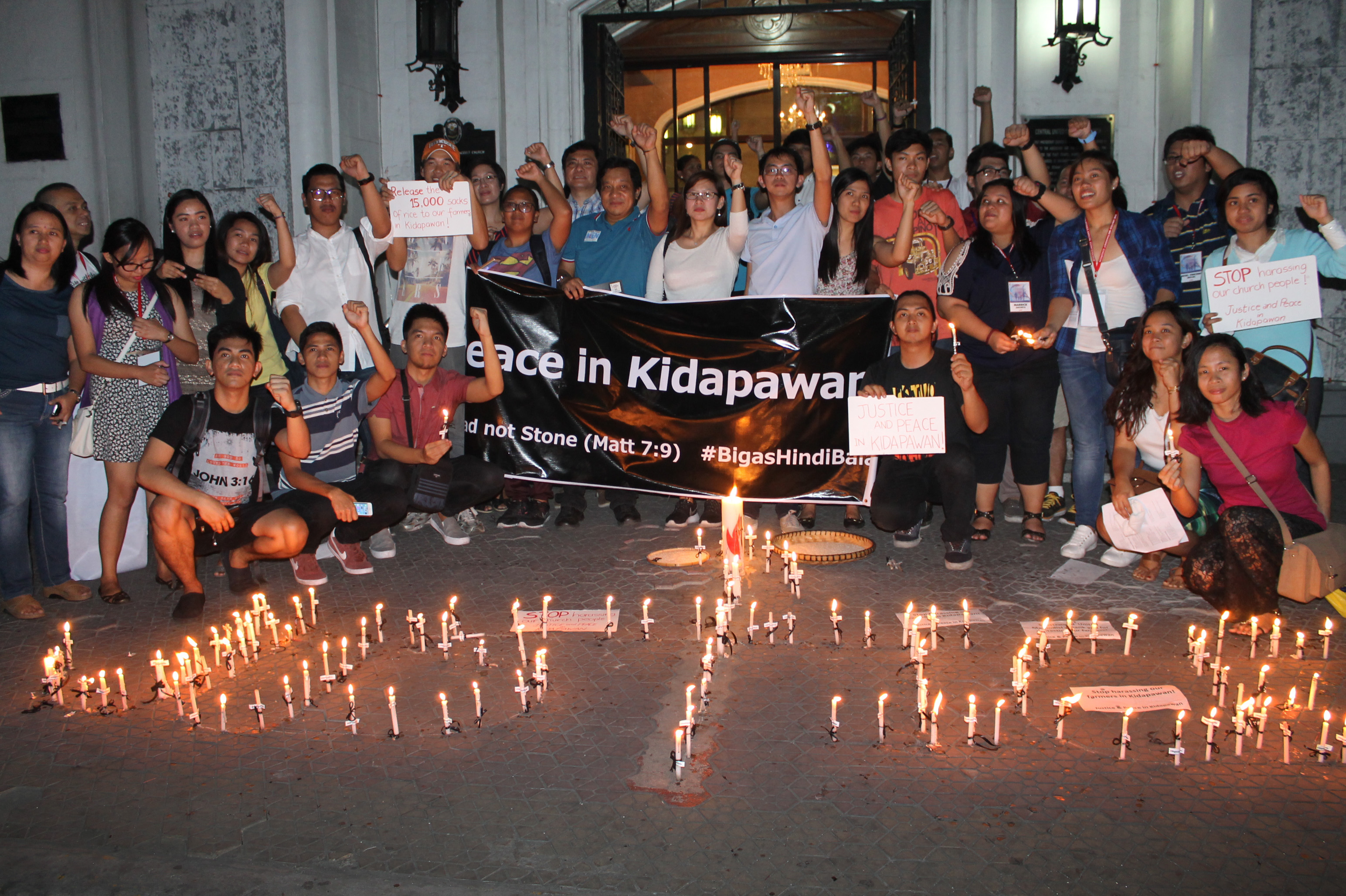 More than 100 people joined the vigil in front of the Central United Methodist Church on April 3, to pray for farmers and Lumads who were asking for rice and protesting treatment from the government. Photo courtesy of Gladys P. Mangiduyos, UMNS.

Juan said Francisco is "being threatened and harrassed for harboring 'illegal protesters.' " He called on United Methodists everywhere to support the farmers and uphold them in prayer.

Juan led a candlelight ceremony on April 3 to pray for the farmers and Lumads, an indigenous people of the Philippines. More than 100 people joined the vigil in front of the Central United Methodist Church.

“We condemn in the strongest possible terms the violence committed against our poor and helpless farmers," Juan said in his statement, recalling that Jesus fed the hungry and provided food and healing for those in need. "They are asking that they be allowed to live by being provided with the most basic of human needs — food. What was given to them were bullets and violence. Some of them met their untimely death. Jesus would have been very angry with these evil doings done against the least, the last and the lost."

He also deplored the intrustion of armed personnel into the church compound and the threats to Francisco.

"We stand on our grounds that the church is a sanctuary for the most vulnerable and those in need of a refugee," Juan said.

"It is never a sin when poor farmers demand food but it is a sin to deny them food,” said Francisco.

The farmers staged the protest on March 30 to draw attention to their communities and to demand assistance from the government.

According to news reports, the police fired on the crowd April 1. In addition to the number killed and injured, at least 89 people, including children, are reported missing.

"In solidarity with the Lumad farmers in Mindanao, this prayer and candle lighting is an expression of our support to them being in the midst of strife and harassment," said Floyd Castro, a layman from St. Mark United Methodist Church.

“I am here to join and help the people who are harassed. They need help. We from Manila episcopal area and Philippines Conference will help in any way we can,” said the Rev. Maximo Gabriel, district superintendent from Southwest Metro Manila.

Frederick Vargas and his wife, Agnes Reganit-Vargas, both United Methodist young adults, were at the candle lighting to pray for the farmers who are asking for rice — “fruits of their labor,” Vargas said. “But what they got in return was violence.”

The California-Pacific Conference Taskforce Philippines also issued a statement condemning the violence against the farmers and the harrassment of Bishop Bishop Francisco.

A statement from the Promotion of Church Peoples Rights, a Filipino ecumenical human rights organization which includes The United Methodist Church, said:

"Our nation faces a severe moral crisis — the cries of the people for food have been answered with hurled stones and life-destroying bullets! When the hunger of the poor brings violent responses from those in leadership, these leaders are not fit to govern.

“As they have lived for decades with inadequate access to basic needs and services, drought conditions are literally unbearable. Their cries should have yielded rice for them to bring to their hunger-plagued families; but rather than sustenance, they were razed by bullets and pummeled with stones.”

United Methodist leaders around the world are adding their voices to those of their brothers and sisters in the Philippines.

Thomas Kemper, top executive of the United Methodist Board of Global Ministries, said people are praying for a peaceful resolution.

“We ask God to bless you with strength, wisdom and the incarnate love of God in Christ as you respond to this challenge of Christian faith and witness in Mindanao,” Kemper said.

United Methodist Bishop Robert T. Hoshibata, president of the United Methodist Board of Church and Society and episcopal leader of the Desert Southwest Conference, said he was praying for a peaceful resolution.

“I am in prayer for the farmers and their families who face violence and hunger,” Hoshibata said.

In a statement read during the April 3 service, the Philippines United Methodist Board of Church and Society condemned the dispersing and shooting of the farmers.

"We condemn in the strongest terms the inhumane curtailment of the rights of the farmers to air their grievances.”

According to news reports, 5,000 farmers from eight municipalities of North Cotabato province assembled March 30 along the Quezon Boulevard, blocking the national highway. They were demanding rice from part of the calamity fund administered by the government for those facing starvation from the drought which has plagued the area since November.

United Methodist leaders have decried the violence against the Lumads, an indigenous people who have been the victims of genocide and human rights violations, for the past several months.

The Lumads, who are from the southern Philippines, have been caught in the middle of combat between government soldiers and paramilitary rebels. Reports have surfaced of entire communities of Lumads being displaced.

In the current situation, medical and food assistance is being provided by individuals, churches and organizations with the help of United Methodists.

"Let's be watchful, let us continue to stand firm and pray seeking God's protection, will, purpose. May we all be united in calling for peace," said Juan.