Editor’s note: This is the eighth in an ongoing series about churches in West Virginia dealing with the opioid crisis.

The Rev. Jeff Allen subscribes to the Rev. Tony Campolo’s quote about religion and politics.

“It’s like mixing manure and ice cream,” Allen said. “It doesn’t hurt the manure, but the ice cream sure takes a hit.”

However, Allen has a calling to ruin a little ice cream now and then.

As executive director of the West Virginia Council of Churches, he frequently finds himself in the halls of the state capitol building a few blocks from his office. He said he doesn’t do a lot of in-person lobbying, but often testifies at hearings, and the Council of Churches issues statements and organizes rallies.

He said having “a presence in the room” as United Methodist clergy is important, and he believes it’s important for the faith community to lend its voice in public policy. 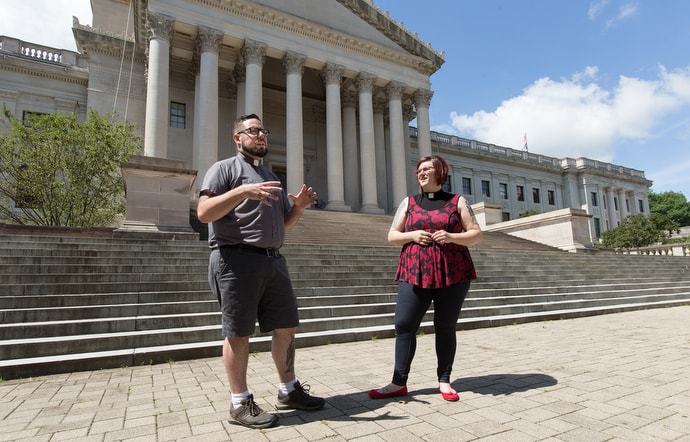 The Revs. Darick Biondi (left) and Cindy Briggs-Biondi are among faith leaders in West Virginia who say the church is called to advocate for mercy and justice. They are standing outside the West Virginia State Capitol in Charleston.

One of the big issues Allen and the council have taken up is criminal justice reform relating to opioid addiction.

“When you come out of prison, you need a job, a place to live and emotional support,” he said.

A lack of any of those things could cause someone to relapse and potentially commit more crimes, yet having a criminal conviction makes it almost impossible to get a job.

“Substance abuse disorder is a disease. We don’t criminalize cancer or other illnesses, and people do some bad things when they’re on drugs,” Allen said. “We need to find ways to move them into an environment where they’re working and living healthy, productive lives.” 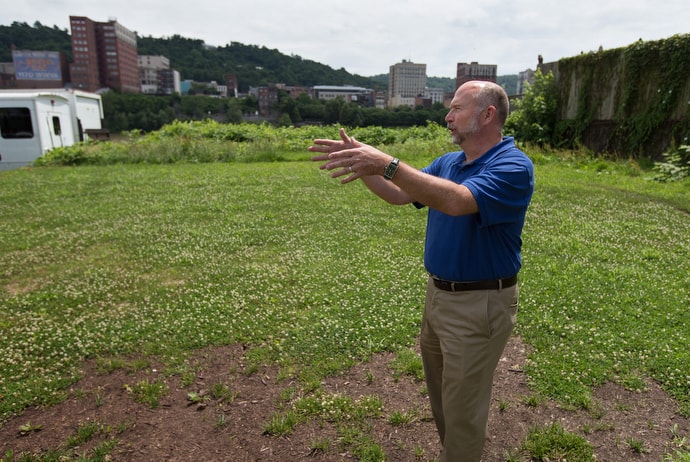 In the past several years, he’s encouraged lawmakers to pass the Second Chance for Employment Act, which would help those with nonviolent felonies expunge their records after five years.

The Rev. Darick Biondi became involved in the issue when it got personal. He learned that a friend of his from a church camp growing up had died from an overdose.

“I realized this was personal for almost everyone, and something almost every church could deal with,” he said. He began speaking out and advocating for the bill during legislative sessions. 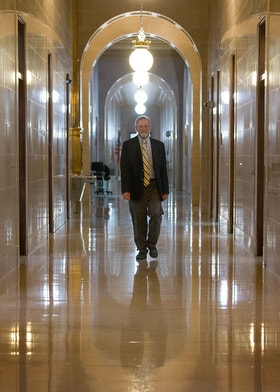 The Rev. Jeff Allen walks through the West Virginia State Capitol in Charleston, where he frequently testifies at hearings in his role as executive director of the West Virginia Council of Churches. One of the big issues Allen and the council have taken up is criminal justice reform relating to opioid addiction.

“We ended up catching people in the hall and just asking very concerned questions,” Biondi said, adding that he’d emphasize to the politicians that this issue matters for his parishioners.

The initial bill passed by the state House of Representatives in 2017 was considered a disappointing compromise. The amended legislation allowed for people with nonviolent felonies to petition to have their felony reduced to a misdemeanor after a 10-year waiting period, without a pathway to full expungement.

However, a more comprehensive version of the bill, called SB 152, was introduced this year and passed, becoming effective in June. Now, people with nonviolent felonies who have been out of prison and off parole for five years may file for expungement. Those with misdemeanors can file for expungement after one to two years, plus it no longer matters at what age the misdemeanor was committed.

In addition to the expungement bill, Allen cited a number of other bills passed in this year’s legislative session that are positive for anyone with a drug conviction seeking to improve their situation. Two bills make it easier to obtain a state ID after release from prison, and also ease restrictions on dozens of professional licenses — including social work, real estate and occupational therapy — for people with criminal convictions. Allen said there are more than 140 licenses unavailable to a person with a felony conviction in the state of West Virginia.

Another bill eliminated the lifetime ban on a person with a felony drug conviction applying for Supplemental Nutrition Assistance Program (SNAP) benefits. Previously, West Virginia, South Carolina and Mississippi were the only three states in the nation with such a law on the books. Mississippi passed similar legislation eliminating the ban in May. South Carolina’s Department of Social Services website still lists drug-related felony convictions as a prohibition to receiving SNAP benefits.

“This was a huge victory for persons coming through re-entry. It’s one less hurdle in order to resume their life,” Allen said. 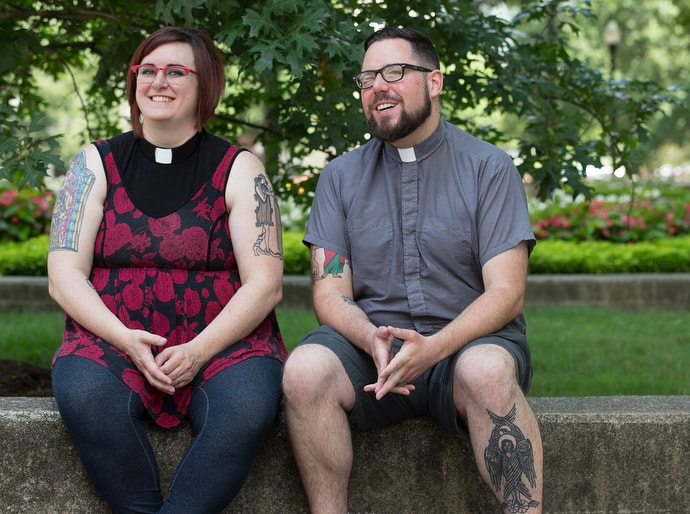 The Revs. Cindy Briggs-Biondi (left) and Darick Biondi discuss their involvement in the annual Day of Overdose Awareness Tribute, held at the West Virginia State Capitol in Charleston. “The idea was that anybody who was coming could bring a pair of shoes — whether they belonged to a loved one who died from overdose or just representing their loved one — and lay them out on the steps as a visual of how many have been lost,” she said.

The House of the Carpenter in Wheeling is another United Methodist ministry that advocates for helping offenders re-enter the community.

The Rev. Mike Linger, House of the Carpenter’s executive director, shared the story of Michael, a 56-year-old with a felony drug conviction.

“No one was going to hire him, but we advocated to an employer to give him a chance and they finally agreed,” Linger said.

The West Virginia Council of Churches and West Virginia Conference promote Day of Hope events that encourage prevention and recovery. For resources, visit wvcc.org/day-of-hope/ or
wvumc.org/2017/08/west-virginia-day-of-hope-worship-resources/.

Use USA.gov to find all elected officials in your area. Visit usa.gov/elected-officials/.

Read other stories in the UM News series, The Church Responds to the Opioid Crisis: The Road to Recovery in West Virginia.

“After about five weeks, we called to check up and they said, ‘If you’ve got anybody else like him, please send them.’ He’s since moved into a supervisor position. It took a lot of advocating for somebody to give him a chance.”

Obviously, not every church is located in a capital city, but any church could participate at the local level.

“Find out when your city council meets, maintain a presence there and join the conversation,” Biondi said.

Allen recommended joining or starting a community re-entry council. These grassroots groups exist in just about every state, many tied to the Department of Corrections. They bring together people from various agencies to share resources and address issues they’ve discovered that present barriers to offenders getting their lives back. A council may include staff from parole and probation departments, public defenders, social mission agencies, law enforcement and the judicial system.

“These meetings get everyone on the same page. They may not know what each other is doing,” Allen said.

He also urged churches to support recovery groups, sober living facilities and harm reduction programs — which often include needle exchanges or methadone clinics — in their communities. These programs are frequently victims of opposition, and support from the faith community could ease resistance. It’s also helpful to donate goods or time.

“The church needs to be about compassion,” he said. “Our society tends to posit things in a binary fashion of good and evil. We can inject mercy into the public debate.”

“We’re called to love our neighbor and there’s no parameters put around that,” said the Rev. Cindy Briggs-Biondi, Darick Biondi’s wife. “If the church isn’t offering hope and care and the opportunity for redemption, then what the heck is the church doing?”

Briggs-Biondi is involved with the annual Overdose Awareness Day Tribute, held on the state capitol grounds. The event was organized in 2016 by the parents of Ryan Brown, Darick Biondi’s church camp friend who died from an overdose. Brown’s family also worked to pass legislation named after their son to create a statewide fund that allocates money for prevention education and treatment. This year’s event will be held Aug. 24.

“The idea was that anybody who was coming could bring a pair of shoes — whether they belonged to a loved one who died from overdose or just representing their loved one — and lay them out on the steps as a visual of how many have been lost,” she said. The rally also includes speakers and information booths with resources on recovery or support for those who have lost someone to overdose.

Briggs-Biondi said that it can be difficult to talk about certain issues without people interpreting them with a political slant.

“It’s really hard, especially in this politically charged climate, to help church folks understand that if you’re gonna follow Jesus, it is political in nature. It’s not partisan, but it is political.” 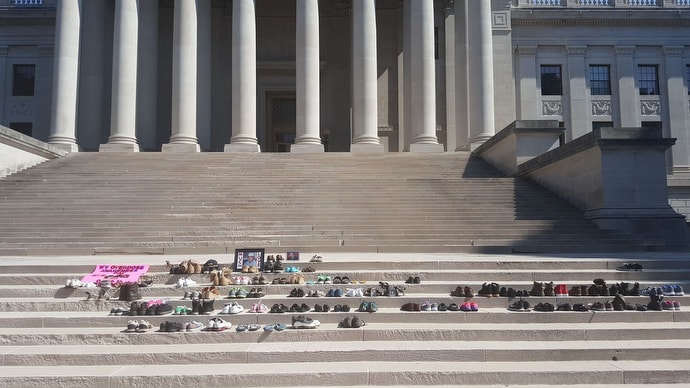 Shoes line the steps of the West Virginia State Capitol in Charleston during the annual Day of Overdose Awareness Tribute in 2016. The event was organized by the parents of Ryan Brown, who died from an overdose. Photo by Rick Bowles, Ryan’s Hope.

After a difficult stretch, The United Methodist Church and Boy Scouts of America are committed to continuing their close relationship but with significant changes.
Congregations