When the Rev. Dariusz Zuber and his wife, Monika, came to Ełk in northeastern Poland in July 2012, they had many dreams. However, the start at their new place of ministry definitely could have been easier.

The church property at Miłości Bożej (God’s Love United Methodist Church) had been neglected for years and was crying out for renewal but, more importantly, the congregation was also yearning for new life. Apart from church services, there had been hardly any activities of late.

While the couple was inspired by the desire to put into practice John Wesley's statement that there is no other gospel than the social gospel, the first years were mainly characterized by renovations, repairs and conversations with people who no longer went to church.

Dariusz Zuber remembers that as a very difficult time for him and his family.

The young pastor had a vision of a church with open doors, open hearts and open minds. He saw a community that was not only committed to the positive spiritual development of people, but that was also socially and culturally engaged, he said. A church that helps shape society and changes a bit of the world. In the life of Jesus, Zuber saw the dawn of a new religious and social reality.

From this, he said, he drew hope and strength to act.

“My dreams were inspired by the activities of Jesus, who reached out to those who were rejected by society and religious norms,” he said. “Thanks to him, we can learn that there are no areas of human life that God's care and love cannot reach.” 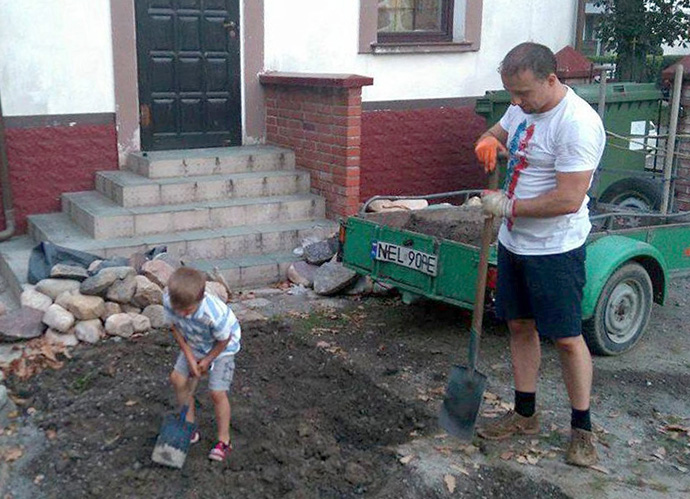 But what to do when you have a vision and concrete ideas for action, but when many hands are too weak to work due to age?

“Open up to others!” is how Zuber sums it up.

To implement the ideas, the couple invited not only parishioners, but also nonprofit organizations and municipal institutions — the library, historical museum and city hall.

“In partnership with others, we ‘proclaimed the Kingdom of God’ by organizing charity concerts, courses of the University of the Third Age, film discussion clubs or programs for children and youth,” he said. “Openness to other groups and associations taught us to see good and traces of God's work also in the activity of social activists and their organizations.”

God’s Love United Methodist Church gradually became a place for different people of goodwill who have hopeful ideas and want to realize them in a trustful cooperation. The development of social programs as well as cooperation with other organizations led to the creation, after appropriate reconstruction and renovation work, of very functional spaces for social, cultural and catechetical activities.

As encouraging as these developments may be, Zuber is also aware of times of drought that demanded a lot of perseverance from him and his wife.

“Jesus' example makes it clear that our responsibility is to introduce the values of the ‘Kingdom of God’ into people's social context without waiting for immediate results — whether that means a conscious turning of people toward God, new church members, the formation of new congregations or changes within relationships,” he said.

During the past few years of his ministry, he has learned to be patient and wait for the fruits of the efforts. “Often they didn't show up until years later,” he said.

Without help, Zuber is convinced that he and Monika, who is now an ordained elder as well, would not have made it.

"God taught me the importance of cooperation,” he said. “Our work, combined with openness to new people, has made our church a good place that teaches dialogue and connects diversity, where tradition grows together with modernity and youth with maturity.

“Our congregation has earned a reputation as an open and cooperative church that supports not only its members, but all those in need."

He is thinking of the counseling center for people involved in violence. Of the therapeutic services for addicts that have been held regularly for several years. Of the kindergarten that has existed for three years and is run by members of the community. And of many other things that have grown.

When the Zubers came to Ełk, there were only two of their children and one young person in the congregation. Everyone else was of retirement age and, Dariusz Zuber says, who often were disappointed or even bitter because of difficult experiences in the past.

Today, he says, the congregation is made up mostly of new people, with a dozen or so children and youth, a worship team and “most importantly, committed, open-minded parishioners who help shape our community.”

Schweizer is assistant to the bishop of The United Methodist Church in Central and Southern Europe, Zurich.

Instead of relying on a pastor to oversee its young adult ministry, First Korean United Methodist Church in Wheeling, Illinois, entrusted it to a devoted and committed volunteer layperson with a calling and vision.
Evangelism