By getting an online ordination through another denomination, a United Methodist clergy candidate has dropped out of the ordination process and abandoned her church membership, church leaders said.

Michigan Area leaders offered that explanation in a Sept. 9 statement about Ginny Mikita. Using credentials from the Universal Life Church, Mikita officiated at the same-sex wedding of the Rev. Benjamin and Monty Hutchison.

The leaders said they wanted to set the record straight after multiple social media posts said the church had “excommunicated” Mikita.

“Neither bishops or district superintendents have the authority to excommunicate lay persons from the church, nor to remove individuals from candidacy for ministry,” Michigan church leaders said, citing the Book of Discipline, the denomination’s law book. Bishop Deborah Lieder Kiesey leads the Michigan Area, and the Rev. William Haggard was Mikita’s district superintendent.

“In choosing to become ordained in The Universal Life Church, Ms. Mikita elected to change denominations.” That means, the leaders said, she also relinquished her status as a certified candidate to be deacon.

Nevertheless, she can rejoin the denomination at any time, the leaders said.

Mikita, an attorney, said she knew that by officiating at a same-sex wedding, she was putting her clergy candidacy at risk but she said her love for her friend, the Rev. Hutchison, made it worth the risk.

However, she disputes that she surrendered her church membership. “I did not and still do not believe my actions equated to an automatic forfeit of my membership or the processes ─ both in letter and spirit ─ outlined in the Book of Discipline.”

She said she is in discussion with clergy, counsel and others regarding possible courses of action going forward.

The end of Mikita’s clergy candidacy is the latest development since Hutchison, an African Methodist Episcopal elder, was removed as pastor of a United Methodist congregation. Nine ordained United Methodist clergy in Michigan are also under complaint for helping to officiate at Hutchison’s wedding.

The Book of Discipline since 1972 has proclaimed that all people are of sacred worth but that the practice of homosexuality is “incompatible with Christian teaching.”

In saying Mikita removed herself from church membership, church leaders cited another part of the Discipline. Paragraph 241 states, “If a pastor is informed that a member has without notice united with a church of another denomination, the pastor shall make diligent inquiry and, if the report is confirmed, shall enter “Withdrawn” after the person’s name on the membership roll and shall report the same to the next charge conference.”

However, Mikita said she alerted her pastor and the chair of her district committee on ordained ministry of her intentions ahead of the Hutchisons' wedding.

To rejoin the denomination, the Discipline says she will need to transfer her membership back to The United Methodist Church. If that’s not possible, she can be restored by reaffirmation of her baptismal vows.

She can reapply to the candidacy process after a year of leadership in her local church. 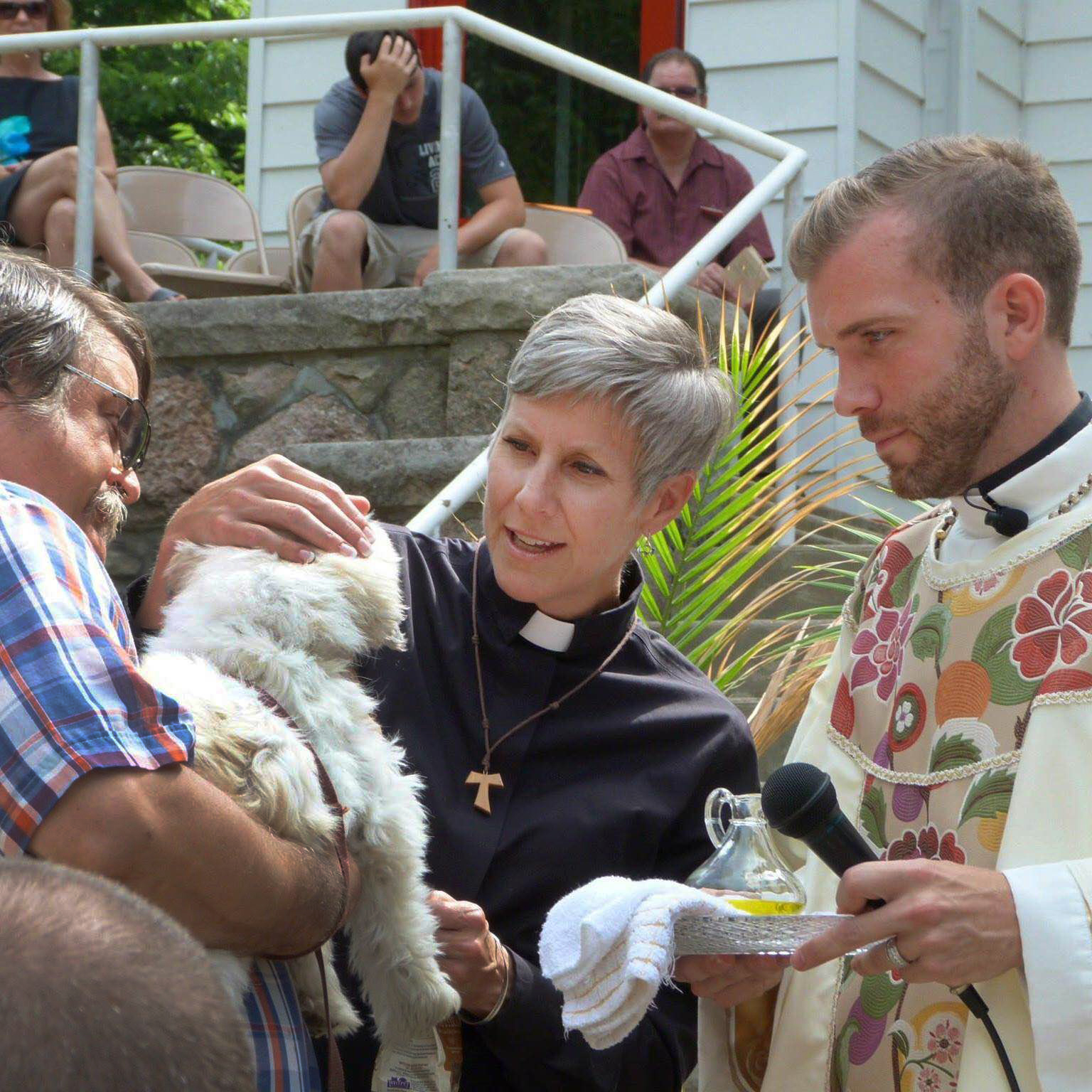 Ginny Mikita, then a certified candidate for a deacon, co-officiates at a blessing of the animals with the Rev. Benjamin Hutchison at Cassopolis (Mich.) United Methodist Church. Photo courtesy of Mikita

The Judicial Council, the denomination’s top court, also has taken up the question of when a clergy member’s association with another denomination crosses the line into a membership shift.

“The integrity of our process and Wesleyan heritage is diminished when people purchase ordinations for the sake of convenience,” she said.

The bishop’s pastoral letter offers solid advice, said the Rev. Robert F. Zilhaver. He is a member of Associates in Advocacy, a United Methodist group that offers advice to pastors under complaint and seeks to ensure the church’s due process is followed.

Zilhaver saw no violation of due process in Mikita’s case. As a clergy candidate, she is more like a job applicant and does not have the same protections as ordained clergy.

He sees the prohibition on dual membership as a protective measure for the church. “This protects the church from people trying to split it and saying we can pull it away from the accountability of the church,” he said.

That concern applies to more than just the church’s ongoing debate about homosexuality but also to other areas of theology, he added.

Bottom line, he said, online ordinations cannot be used for an end run around the denomination’s ban on blessing same-sex unions.

Mikita told Reconciling Ministries Network, which first reported her removal, that her commitment to The United Methodist Church has not changed. The network is an unofficial United Methodist advocacy group that seeks full inclusion for gays, lesbians, bisexuals, transgender and queer or questioning individuals in church life.

“My membership in The UMC represented my sacred and holy commitment, made by public profession of faith during worship, to remain loyal to Christ through The UMC and to do all in my power to strengthen its ministries by my prayers, presence, gifts, service and witness,” she said.

Matt Berryman, the executive director of Reconciling Ministries Network said the group understands the actions taken against Mikita may be in line with church law.

“However, we remain deeply disturbed by the reality that such harmful and unfruitful actions can be justified by our own policies,” said Berryman, the group’s executive director. “To say that we must be comfortable with such actions simply because they are in line with church polity is like asking Jesus to sanction the suffering of a fellow human being because Scripture forbids healing on the Sabbath.”