The New York and Greater New Jersey conferences each had a special called meeting March 16 to reflect on and respond to the 2019 General Conference in St. Louis, which voted to reinforce The United Methodist Church’s bans on same-sex weddings and LGBTQ clergy.

In New York — which has pushed back against the denomination’s bans on performing same-sex weddings and the ordination of gay clergy — Bishop Thomas J. Bickerton noted that legislation does not convert the heart. “Just because the vote went a certain way, we cannot expect conformity to follow.” He said he had “lost faith” in the church’s ability to deal with differences through legislation.

“It has broken my heart to see and experience the church I love create such hurt among people,” Bickerton said during the sermon that opened the session at Purchase College, State University of New York, in Harrison. Some 900 conference members attended.

Bishop John Schol of the Greater New Jersey Conference addressed the post-General Conference tensions, but also called for a focus on mission, including fighting discrimination in all forms.

“What we have found is that votes may retain or change policies, but votes do not change hearts.  … Our concern and conversation about the LGBTQ community should not lessen our commitment to change hearts and minds so that we end prejudice, oppression, sexism, racism and privilege,” he said.

The two annual conferences, regional bodies of the denomination, are the first to have called sessions after the special General Conference, but many conferences and bishops are holding information sessions.

The United Methodist Church has faced division for decades about how accepting to be of homosexuality. Amid talk of schism, the 2016 General Conference asked bishops to try to lead the church through its impasse.

The Council of Bishops created a Commission on a Way Forward to review church law regarding human sexuality, and to consider alternatives for holding the denomination together. The bishops called the special General Conference to consider legislation described in the commission’s final report. 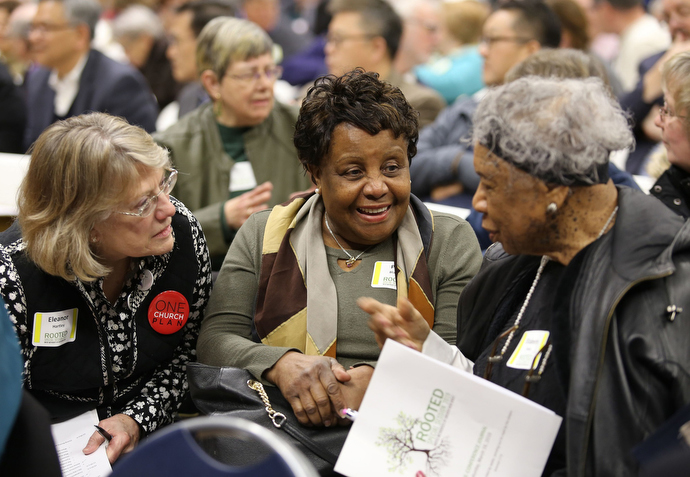 Members of the Greater New Jersey Conference meet in small groups during a special session of their annual conference at Brookdale Community College in Lincroft, N.J. Photo by Corbin Payne.

A majority of bishops supported the One Church Plan, which would have removed from the Book of Discipline the statement that homosexuality is “incompatible with Christian teaching” and left questions of same-sex marriage up to individual churches and clergy, and ordination of LGBTQ clergy up to conferences.

But by a 438-384 vote, delegates approved the Traditional Plan, which retained those restrictions and strengthened enforcement. The conference included heated rhetoric and demonstrations and drew nationwide media coverage.

Since St. Louis, many U.S. churches and pastors have protested the outcome in varying ways, and the Commission on General Conference has organized a task force to investigate allegations of voting irregularities. The Judicial Council, the denomination’s top court, will meet next month to consider the constitutionality of much of the Traditional Plan.

The hurt and mistrust that have occurred during and after GC2019 were evident when the members of the New York delegation presented a spoken narrative about their efforts “to give a powerful expression of the inclusive values of the New York Annual Conference on the floor of General Conference.”

The lack of LGBTQ voices on Feb. 23, the conference’s opening day and a “Day of Prayer,” led to a demand to remedy that situation, a public witness calling attention to those voices and a loss of hope for real conversation, the delegation said.

“This first day set a tone, not for holy conferencing but for the raising of competing agendas and the question of which one would win the day,” said Dorothee Benz, a lay delegate from New York City.

Delegation members also called on the governing committees of General Conference to disregard the legislative assembly’s actions because of the taint from voting irregularity allegations.

A group of New York clergy and lay members also announced that a statement “affirming the lives, ministries, and families of our LGBTQIA+ siblings” and supporting social justice values would be available for signatures.

Bickerton said that while he doesn’t consider talk about winners and losers acceptable in this situation, “There is a side claiming victory. And there is a side that feels very clearly that they have lost. The body is fractured and divided.”

The bishop acknowledged such division extends to the New York Conference. “Strong cultural drivers come into play as many here embrace a traditional value,” he said. Another part of the conference offers a strong “voice of advocacy and inclusion.”

Recent positions by the New York Conference and its board of ordained ministry “have stated our clear position on who we see ourselves to be as an inclusive body of Christ,” Bickerton said. “If nothing else happened in St. Louis, the decision of the General Conference has only reinforced those deep convictions with renewed strength.”

Bickerton said his hope for the defeated One Church Plan was based upon “the reality” that the New York Conference had been operating that way — allowing for traditional viewpoints “in the midst of progressive viewpoints and expressions” — for years. 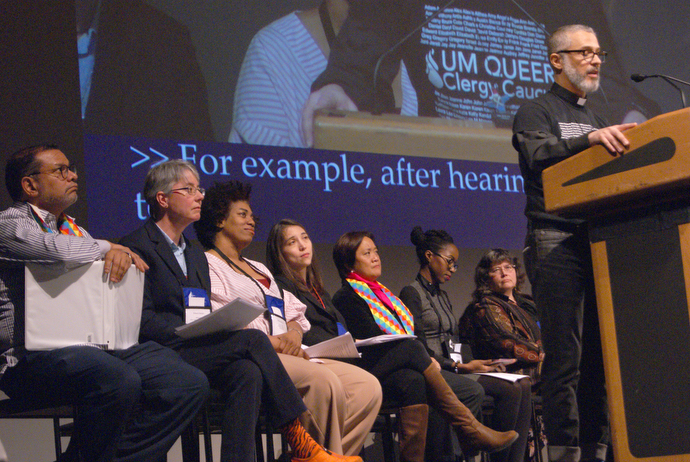 The Rev. Alex da Silva Souto, a delegate to the 2019 United Methodist General Conference, addresses the special session of the New York Annual Conference where delegates shared their reflections on what happened in St. Louis. From left are: Jorge Lockward, the Revs. Kristina Hansen, Sheila Beckford and Vicki Flippin, Karen Prudente, Tiffany French Goffe and the Rev. Martha Vink. Photo by Stephanie Parsons.

The actions in St. Louis largely shut out the LGBTQ community, the bishop said. Bickerton pledged to “provide an unwavering, undying support for the LGBTQIA community here in New York.”

In the Greater New Jersey Conference, more than 1,000 people, including observers, attended the special session at Brookdale Community College in Lincroft.

Schol, in addressing the crowd, acknowledged division in the conference and broader church over homosexuality, but emphasized that Methodists have endured major conflicts before over slavery, segregation, alcohol and women’s ordination.

“In the midst of present disagreement, I am proud and glad to serve in a theologically and ethnically diverse conference,” he said.

Later, in an interview, Schol assessed the conference’s reaction to passage of the Traditional Plan.

“Most people are disappointed,” he said. “When we do not all think alike, we do not want to hurt people. People feel the Traditional Plan will hurt people and ultimately our mission.”

“What the annual conference said on Saturday was we would like them to come forth with ideas for how we, Greater New Jersey, could recognize different contexts, different theological perspectives, and allow for contextual ministries in those different contexts,” Schol said. “The possibilities are wide open.”

Schol has been describing Greater New Jersey as a “one church conference.” He said that means the conference “provides room for differences while remaining faithful to biblical scholarship and reason, tradition and experience. In Greater New Jersey we welcome people as they are, including the LGBTQ community.”

But the Rev. Beth Caulfield, conference president of the unofficial advocacy group Wesleyan Covenant Association, was unsatisfied with Schol’s explanation of the term and its implications for Book of Discipline enforcement. The WCA supported the Traditional Plan.

“We’re still wondering what that means,” she said.

Caulfield added that traditionalists at the called meeting were not feeling comfortable, and despite Schol’s urging were reluctant to participate in a period of storytelling around human sexuality issues.

“If we want to do some story-sharing it would be great if we focused on stories anchored in Scripture, which would be more the Wesleyan way in keeping with the orthodox and universal approach to unity,” she said. 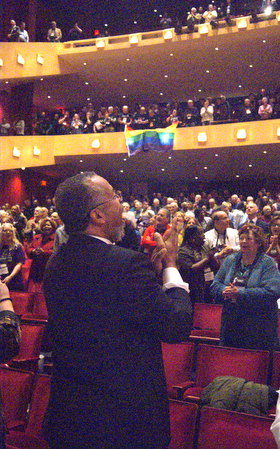 “It was almost like people were trying to assess whose side everyone was on,” she said. “In the midst of the tension, Bishop Schol tried to lead us forward in unity rather than discord. He tried to pull us together.”

Naulty, too, is wondering about Book of Discipline enforcement, given the Traditional Plan’s passage.

“We have bull’s-eyes on our backs,” she said of herself and other pastors who support full-inclusion of LGBTQ people.

Schol urged churches not to withhold apportionments in this uncertain time.

“This is a time to engage,” he said. “We need to invest in relationships with people who think differently and have different experiences than ourselves.”

Bloom is assistant news editor for United Methodist News Service and Hodges is a Dallas-based reporter. Contact them at (615) 742-5470 or [email protected]. To read more United Methodist news, subscribe to the free Daily or Weekly Digests.