Ten times as many worshippers can now attend Sunday services at Saint Paul United Methodist Church in this village in southern Burundi.

The newly dedicated church can hold 3,000, compared to the 300 the old church could accommodate. The church has more than 7,300 registered members.

United Methodists in the Murehe District and others from the Burundi Conference raised the $145,000 needed to build the new church.

The Rev. Manasse Kanyumayinzu, Murehe District superintendent, said the new church allows everyone to come together under one roof. 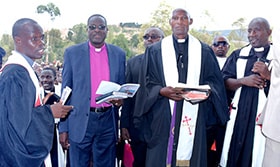 Bishop Daniel Wandabula of the East Africa Episcopal Area (second from left) presides over the dedication of Saint Paul United Methodist Church in Murehe, Burundi. United Methodists in the Murehe District and others from the Burundi Conference raised the $145,000 needed to build the new church. Photo by Pepi Mbabaye, UM News.

“Whenever we would do a revival at the district level, we didn’t have a proper building to accommodate all members, so we gathered together under a big tree for its shade,” he said, pointing to a large tree on the property. “With God’s guidance, this motivated us to be united in building this temple in which we are gathered in today.”

Missionaries founded the church in Burundi in 1940. When they left in 1980, the church had grown to 6,000 members. In the past 40 years, membership has increased to 256,219, according to a statistical report presented during the 2019 Burundi Annual Conference in July.

For 12 years, the church in Burundi was divided, with two factions contending for control of church affairs after the death of Bishop Alfred J. Ndoricimpa in 2005.

In May 2017, the Rev. Jean Ntahoturi, a graduate of Africa University, was elected the new legal representative of The United Methodist Church in Burundi, and social relationships in the church began to thaw.

At a special Burundi Annual Conference session Feb. 5-7 in Gitega, both sides committed to the reconciliation and reunification of the Burundi United Methodist Church.

“God has been merciful and good to you. I wish God to still bless Murehe’s church members in the future. I remind other districts to learn from you and build permanent church buildings like this,” he said.

There are an estimated 52,000 members in the Murehe District, with 85 percent of them young men and women.

During the summer each year, both the youth and women’s organizations gather for big crusades that attract church members and other denominations. The new church will allow the large crowds to gather in one place.

Bishop Daniel Wandabula of the East Africa Episcopal Area presided over the ceremony.

As he opened the doors of the new Saint Paul United Methodist Church to allow members to enter, he reminded the Christians present that the building is “a holy place where we could oversee the work of God’s church.”

He also told the congregation to abstain from ordinary or secular use of the sanctuary.

“It should be a place to confess our sin and receive God’s forgiveness, a place to celebrate a new life through the sacraments, a place to dedicate our lives, our time, our talents, our treasures for the development of God’s Kingdom.”

He also said it is a place to gather as a family to enjoy the gifts and blessings of God.

He spoke with pride about the growth of the church in Burundi.

“We are not surprised to see the magnificent building we see here,” he said. “We know that the Burundi Annual Conference is the mother of other annual conferences in the East Africa Episcopal Area. I am ready to come and celebrate with you again when you invite me to launch more beautiful church buildings like this one.”

The church also is enjoying the repatriation of church members who fled the country when conflict escalated among Burundians following the assassination of a democratically elected president in 1993.

“My fellow pastors, young men, women and men in my parish, you did what the Lord wanted you to do. You were tireless and you showed a heart of Christianity when your church needed you.”

Mbabaye is a communicator for the Burundi Conference.