It is dark at 6 a.m. and the trees are quivering as the birds wake.

On the sprawling tan building, a bright yellow replica of the sun glows above the words, Southwest Key Programs, Casa Padre. The parking lot is full of cars behind yellow sawhorses that warn “KEEP OUT.”

Three people gather at the edge of the detention center, which houses more than 1,500 young immigrant boys apprehended at the Texas border while seeking asylum in the United States.

With soft voices, they start praying as the sky slowly turns from black to dark blue. 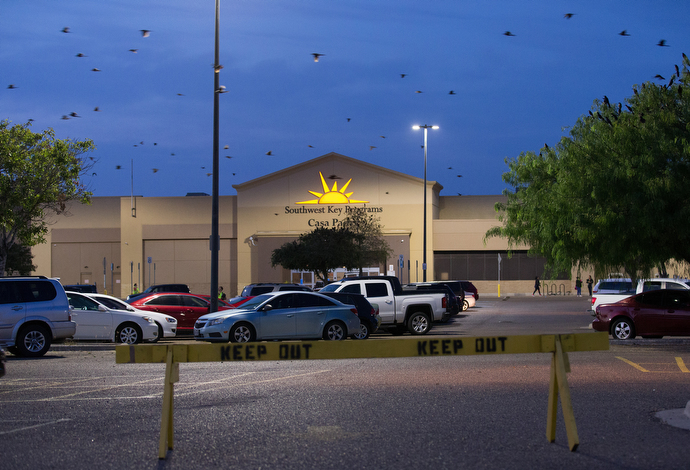 Casa Padre, housed in a former Walmart, is the largest immigration detention center in the U.S. Photo by Mike DuBose, UMNS.

The Revs. David Wilson and Donna Pewo, clergy from United Methodist Oklahoma Indian Missionary Conference and Henrietta Mann, a Cheyenne prayer woman, came to Brownsville on Aug. 4, to offer prayers for the children housed in Casa Padre. This facility, a former Walmart, is the largest shelter in the U.S. for minors.

The quiet ceremony included burning cedar and sending out prayers to the four corners of the earth. Wilson read “A Prayer Beyond Walls,” written by Ray Buckley, an Alaska Conference member who is a native author and illustrator.

Mann said the hope is the prayers and love will somehow penetrate the walls of the center and touch the hearts of the children inside.

“An elder like me cannot just sit back and let the world go by when it is so out of balance,” said Mann, who initiated the idea of going to the detention center and praying. 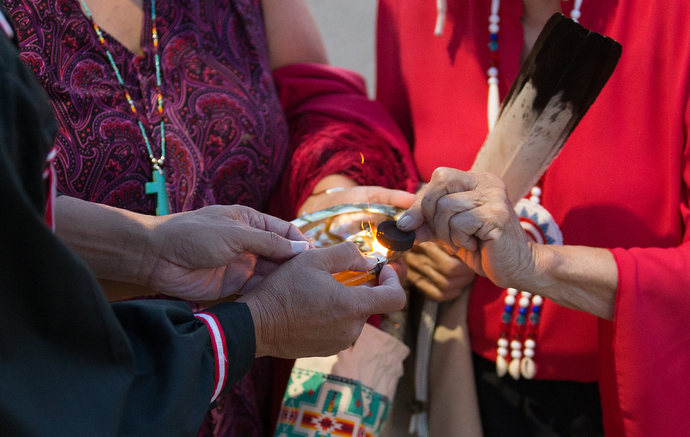 Native American leaders prepare charcoal that will be used to burn cedar during a prayer service for immigrant children held at the Casa Padre detention. Many Native Americans believe that cedar smoke carries their prayers to God. Photo by Mike DuBose, UMNS.

“It was just a matter of my knowing how spiritually rooted native people are — and how we recognize the values of love and sharing — that I would not just sit back in my recliner and let horrible and tragic things happen without trying to do something about them,” she said.

A Prayer Beyond Walls

When our great-great grandparents were living,

Their children were taken away.

When our great-grandparents were breathing,

Their children were taken from their homes.

When our grandparents had their being,

The children were taken.

When our parents walked,

Some of them did not know who they were,

For they were among those who had been taken.

We, whose bones were across borders,

Wept, and You were witness.

The world has been focused on the border towns of Texas after the Trump administration initiated a “zero tolerance” policy that criminally prosecutes all who cross the border illegally. In the first months of the policy, families were separated. Hundreds of children still have not been reunited with their families.

Most of the boys in this center are unaccompanied minors fleeing Central America, known as the violent Northern Triangle.

The children are fleeing extreme violence and poverty as well as discrimination against native people, Wilson said. El Salvador and Honduras have the highest murder rates in the world and women and girls are often the targets.

“Prayer is paramount in all indigenous communities and is done in so many ways,” Wilson said. “We know the power that prayers and ceremonies have, and that is how we chose this service.”

Wilson said in his conversations with Mann, they talked about the boarding school experience of their own native people, about separation from families.

“These similarities have created even a greater connection to what is going on in these detention camps. We can resonate with the pain of these children, and it pains us so much,” he said.

Pewo said the experience was “heart-wrenching.” 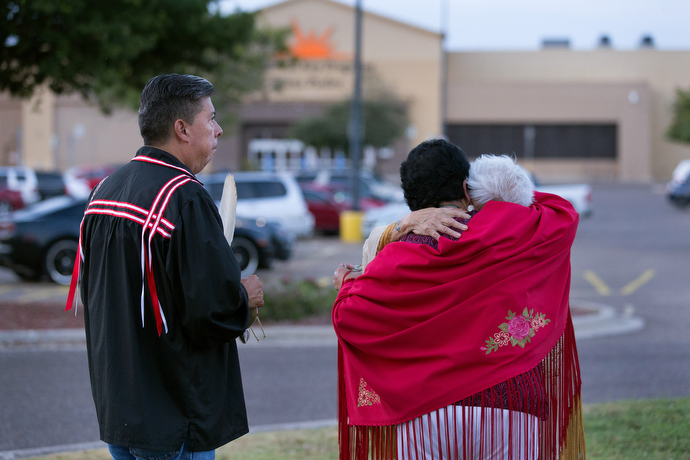 “As a mother and a grandmother, it hits home,” she said. “This is such a humanitarian issue, much more than a political issue. It is about how we treat one another, how we embrace one another.”

Mann said the prayers were for a good life, a balanced world and compassionate hearts.

“I have no idea what goes on behind those closed doors,” she said. “To be able to hold one or two of them or all of them would have been wonderful. But it didn’t happen, it is not going to happen, but we will continue to offer those prayers to the great power spirit world and know that they will be answered in their own way.”

Still, United Methodists cautioned that details of any policy shift are important and stressed that the executive order isn’t enough.
Mission and Ministry

Texas Conference partners with local churches to start child care centers in underserved areas, with a focus on literacy, health and discipleship.