But they cautioned that details of any policy shift are important and stressed that the executive order isn’t enough.

“We welcome anything that reunites families but insist on a complete and humane approach to dealing with these cases of people seeking asylum in the United States,” said Bishop Scott Jones, who leads the Texas Conference and is a member of the Council of Bishops’ immigration task force.

He added: “The United Methodist Church has been calling for comprehensive and humane immigration reform on all levels. This (the separation of parents and children) is just the most recent manifestation of a long-running problem.”

Trump said his June 20, 2018, order would not end his administration’s recent zero tolerance policy of prosecuting all adults caught entering the U.S. illegally. But, the Associated Press reported, the order means to keep families together while they are in custody, as well as expedite their cases and involve the Department of Defense in housing families.

MARCHA (Methodists Associated Representing the Cause of Hispanic/Latino Americans), expressed gratitude for all who stood against the policy. "However, we also believe that the detention of families is still inhumane and unacceptable," the group said in a statement. "The concept of 'familia' is the central foundation of the Hispanic/Latino culture."

Bishop Kenneth H. Carter Jr., Council of Bishops president and leader of the Florida Conference, said the families’ plight has put him in mind of God’s declaration in Exodus 3:7-8 that he has seen the misery of his people.

“An executive order ending separation of families at our borders is good news, and a reversal of an inhumane and immoral practice,” Carter said. “We are grateful for the presence of United Methodists in the very areas where these detention centers are located and for the acts of love and compassion they are offering. We rejoice with these families as they are reunited. We give thanks for a prophetic church that joins God in the deliverance of the most vulnerable from bondage and oppression.”

Still, he said more needs to be done for immigration reform.

In early May, U.S. Attorney General Jeff Sessions — a United Methodist — announced the Trump administration was instituting the zero-tolerance policy.

Under the policy, he said the departments of Justice and Homeland Security would work together to criminally prosecute anyone who crosses the border illegally.

This new policy led directly to migrant children being separated from their parents. The minors were deemed “unaccompanied” and routed to the Department of Health and Human Services, with little way for their parents to track them. 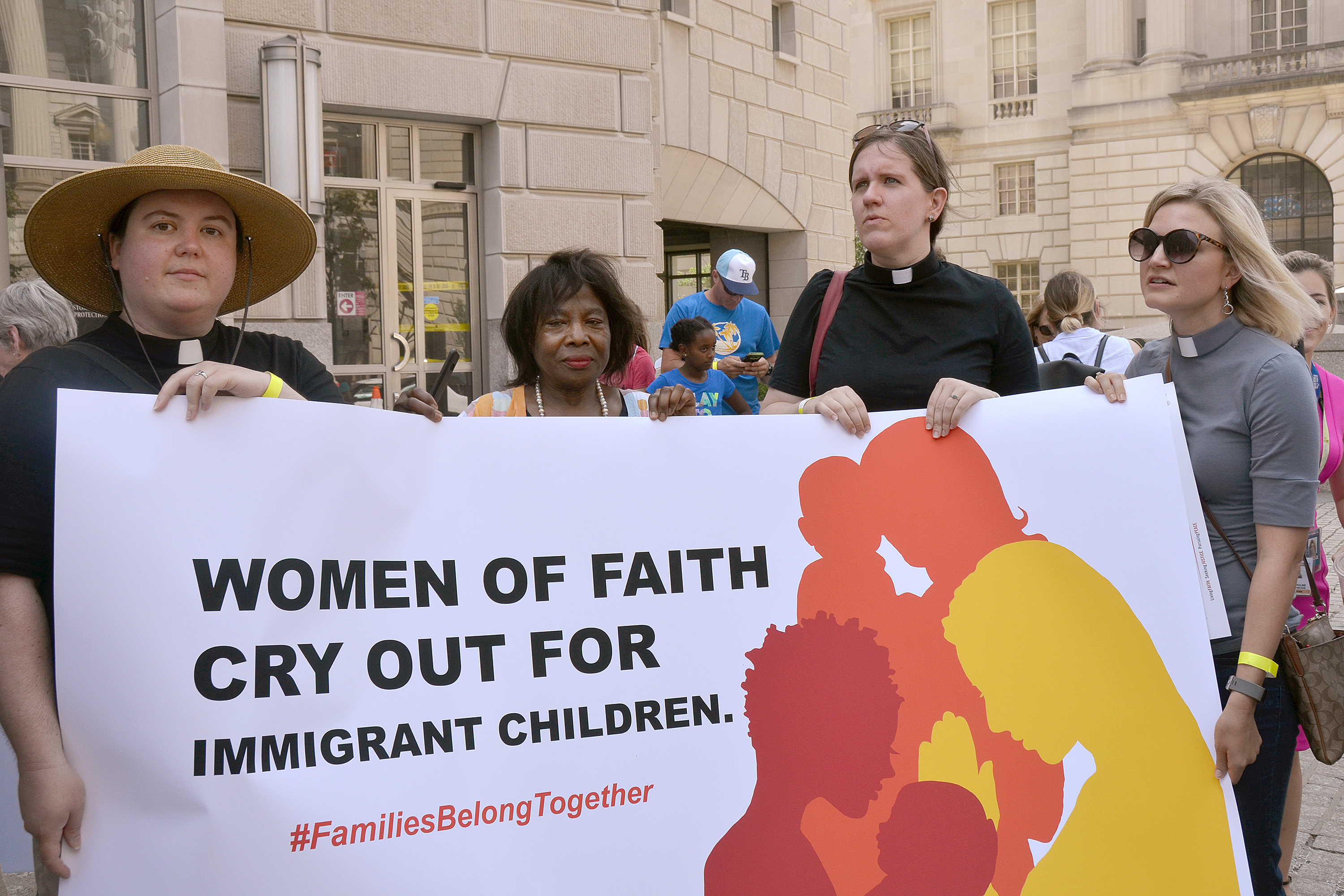 United Methodists join a rally outside the U.S. Customs and Border Protection offices in Washington. From left are: the Rev. Sarah Harrison-McQueen; Susie Johnson, director of public policy for United Methodist Women in Washington; and the Revs. Allie Rosner-Bass and Kate Floyd. Photo by Erik Alsgaard, UMNS.

To donate to National Justice for our Neighbors

Since then, Customs and Border Protection says, more than 2,300 children have been separated from their parents after crossing the U.S. southern border. The policy has affected even people seeking asylum. The growing crisis has troubled both Republican and Democratic lawmakers.

“The majority of these families are fleeing unspeakable violence in El Salvador, Guatemala and Honduras and seeking asylum in the U.S.,” said Rob Rutland-Brown, executive director of National Justice for Our Neighbors.

The United Methodist ministry, which works across the U.S., provides legal services to immigrants who cannot afford a private attorney. That includes people affected by this policy.

“The U.S. maintains statutory and regulatory rights for people who arrive with or without papers and seek protection here. Those fleeing persecution and violence have a right to make their case heard, and Justice for Our Neighbors is here to help them.”

He pointed out that reuniting families remains a challenge. Parents are supposed to be reunited with their children before they are removed from the United States, but the U.S. Department of Health and Human Services could not provide statistics on how many children have been reunited with their parents.

News reports say a number of immigrants who have been deported are having a hard time locating their children.

The president's executive order does not address how families already separated can be reunited.

Some United Methodist have taken issue especially with Sessions, a fellow denomination member who used Romans 13 to defend the enforcement.

In a June 14 address in Fort Wayne, Indiana, Sessions argued that a tougher approach on immigration is in the national interest and protects children by discouraging dangerous journeys to cross the border.

“I would cite you to the Apostle Paul and his clear and wise command in Romans 13, to obey the laws of the government because God has ordained them for the purpose of order,” Sessions said in the speech.

More than 600 United Methodist clergy and laity joined to file charges against Sessions under church law, claiming that his enforcement of the policy amounts to child abuse in reference to separating young children from their parents and holding them in mass incarceration facilities. They also accused Sessions of racial discrimination and contradicting church doctrines.

United Methodists have also sought to sway other national leaders, and some took to the streets.

On June 19, retired Bishop Jane Allen Middleton and other United Methodists were among hundreds of women faith leaders gathered outside the Customs and Border Protection offices in Washington to protest the policy.

Middleton spoke at the rally, saying she was speaking on behalf of all the women United Methodist bishops.

“How long, O Lord, must your children suffer?” she asked. “How long will we, as a nation, continue to abuse other human beings because of their immigration status?”

Jones and the four other active United Methodist bishops in Texas collaborated on a June 20 statement saying they were “heartened” by the Trump executive order, but also wanting United Methodists to stay engaged in the issue.

“We stand united with our Christian sisters and brothers from across the nation in calling for continued compassion and care for the children affected by their unwarranted detainment and separation,” the Texas bishops said.

They also called for letters to be written to Congress asking for legislation to make sure the families are kept together, and announced a “Write to Reunite” website for that purpose.

At least two annual conferences meeting this month have taken a stand.

The Rio Texas Annual Conference also overwhelmingly approved a resolution asking the U.S. Justice Department to immediately cease the policy. The conference has within its borders some of the detention centers used by authorities in carrying out the tough enforcement policy.

The Indiana Annual Conference passed a resolution opposing “any policy that breaks apart families and excludes refugees solely on the basis of their religion or national origin.”

The executive board of the Center for the Study of Latino/a Christianity and Religions at United Methodist Perkins School of Theology issued a June 19 statement, which said in part:

“We find ourselves in a historic moment when the U.S. asylum laws are inflicting injustice and oppression instead of providing refuges from these … . We believe that our great nation does have the ability to find a path forward in a manner that is compassionate and just.”

Hodges and Hahn are writers for United Methodist News Service. Alsgaard is the managing editor in the Ministry of Communications for the Baltimore-Washington Conference. Contact them at 615-742-5470 or[email protected]. To read more United Methodist news, subscribe to the free Daily or Weekly Digests.