“There were some challenges when I started serving at Kamisamba,” said Charinda, a missionary from Zimbabwe serving through the United Methodist Board of Global Ministries. “The culture was very different from my own. Women were expected to be quiet and submissive,” she added.

“I was in a position of power as the farm manager but sometimes male employees disregarded whatever I had to say based on my appearance,” she said.

The farm has transformed under her watch. Her face lights up as she describes the progress over the past year.

“We managed to supply vegetables for the annual conference and the church saved money.  We have renovated the training center and held trainings for eight districts. It’s such a great joy when you get reports from the districts where the training has been implemented,” she said.

“We have been able to pay workers’ salaries and keep the farm running.”

Charinda attributes her success to support from a local family.

“In all those negatives, there is someone who will stand by you. I have a family which supports me, prays for me and teaches me the local ways,” she said. 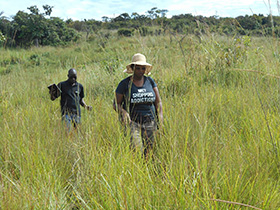 More than 50 missionaries serving in Africa and their families were in Johannesburg Jan. 17-22 for the Global Ministries missionary gathering this quadrennium. It was a time to share their experiences and learn from their counterparts who serve in different countries.

Larry Kies, 66, a missionary from Iowa, has been teaching agriculture and providing technical advice to the farm at Africa University in Zimbabwe since 2002.

“The farm was financially struggling and I helped to introduce dairy processing,” he said.

He worked with farm managers on more efficient production and in recent years has raised considerable money to buy tractors and equipment.

Kies delights in the irrigation system at the Africa University farm.

“The center pivot irrigation uses water and labor more efficiently. I also derive joy from working with students to get experience on a commercial farm,” he said.

He said he also has enjoyed raising funds for agriculture students and seeing those students prosper and graduate.

The Rev Katie Meek, 36, an elder in the Central Texas Conference, has been serving for just over a year in Sierra Leone.

Her immediate challenges were the language (Krio) and learning about the people, the customs and the pace of life, she said.

Excellence, integrity and service are the cornerstones of the United Methodist University of Sierra Leone, where Meek is serving.

“I have learned to speak Krio. It’s not just the words, but the tone has to be right. In the process, you have to be OK with looking stupid and sounding like a toddler,” she said.

Meek also preaches and volunteers with a prison ministry where she gives lessons in the juvenile detention center.

“My favorite thing is watching students gain perspective and confidence. It is wonderful to watch the ‘aha’ moments and see it all come together. There is nothing like that,” she said.

She teaches two classroom values:  “the world needs your voice” and “details matter.”

Meek enjoys dancing in church. “The energy and joy in worship is different from Dallas,” she said.

The Rev. Fernando Matsimbe is a church planter in Tanzania. He said he enjoys seeing new people come to Jesus Christ.

“This defines my ministry as a person. As I move to different places, my presence has a meaning when the message is heard and people respond positively,” said Matsimbe, who is an elder in the Mozambique South Annual Conference.

“My presence is relevant as I help pastors and communities to change their lives. I can see my service is not in vain.”

The Rev. Jean Claude Maleka also is a church planter and mentor of local pastors in Côte d’Ivoire.

“We have built six sanctuaries and two personages over the past six years. We also provide clean water and water towers for communities, not just United Methodists,” said Maleka, an elder in the South Congo Annual Conference.

“I derive great joy in seeing transformation of local churches. Sometimes individuals are able to do what they were not able to do before I joined them.

“We are raising funds for construction locally because the communities are now understanding and participating in what we are doing.”

He said about 15 couples have decided to officially wed in the church since he began his service.

Dr. Tendai Manyeza, 56, began serving as a missionary at Kissy United Methodist Hospital in Sierra Leone last year after serving at Old Mutare Mission Hospital in Zimbabwe for 23 years. He was appointed a Global Health missionary in his home country in 2008. Global Health is part of the Board of Global Ministries.

“I was overjoyed by the reception from the health board, Bishop (John K.) Yambasu and hospital staff.  They gave me a good orientation and I received support from the senior doctor, which has made me settle well,” he said.

“Being a missionary has made me grow spiritually. I am motivated by the appreciative patients and love my work,” Manyeza said. He hopes his wife, Natallia, a church elder, will also become a missionary.

“I partner with women and we find ways to empower each other. My major joy is to be able to get to the grassroots and I feel those are the people who need this partnership,” she said.

Discipleship Ministries and the United Methodist Board of Higher Education are among the most recent agencies to consolidate space following the upheavals of COVID-19.
Global Health