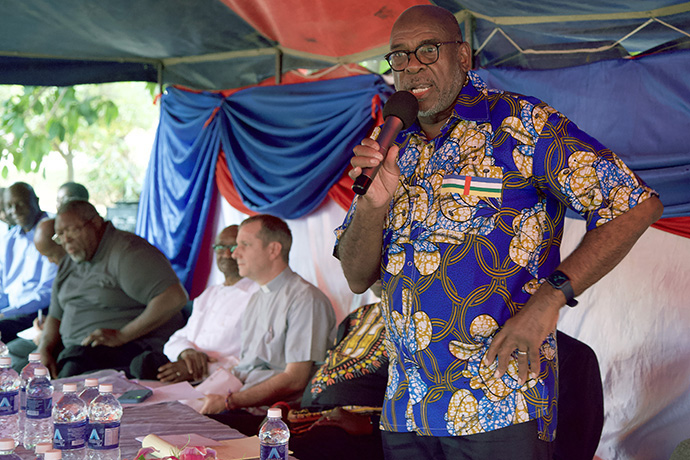 Bishop L. Jonathan Holston, episcopal leader of the United Methodist South Carolina Conference, speaks during the presentation of $800,029 donated by the conference to the Fairfield Children’s Home in Mutare, Zimbabwe. Photo courtesy of the Africa University Public Affairs Office.

In 2001, the Rev. John Holler and a mission team from South Carolina traveled thousands of miles to work at the Fairfield Children’s Home.

They fell in love with the orphans and The United Methodist Church’s Old Mutare Mission that was caring for them. Holler promised to return.

“For 20 years, it was a promise unkept,” he said. “It is amazing to return to this place.” 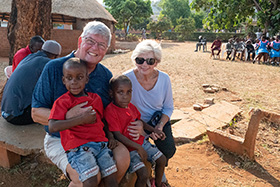 Charles and Carol Moore count 5-year-old twins living in the Fairfield Children’s Home at Old Mutare Mission as two of God’s many blessings in their lives.

The two boys, Blessed and Blessing, sat on Charles’ knees during a special service when the South Carolina Conference presented a gift of $800,029 to Fairfield ...

More than 80 United Methodists traveled from the U.S. to celebrate the 30th anniversary of United Methodist-related Africa University and the inauguration of the Rev. Peter Mageto as the university’s fifth vice chancellor.

The visit to Old Mutare Mission was also in the plans.

“Africa University is called the ‘School of Dreams,’” said Bishop L. Jonathan Holston, episcopal leader of the South Carolina Conference. “The Old Mutare Mission is across the way in the ‘Valley of Hope.’”

Because Africa University originated in Old Mutare, Holston continued, “we have no choice but to embrace the Old Mutare Mission.” The university was built on land originally belonging to the mission and donated by the church in Zimbabwe.

Many of the donors and visitors on the journey, organized by the Africa University Development Office, came from the South Carolina Conference. Holston said he wanted the people to “see with their own eyes how the money they give is making a difference.”

The gift to Fairfield came from a campaign to raise funds for the Epworth Children’s Home in South Carolina where Holler, who recently retired, was president and CEO. Holston agreed to the fundraising idea but asked Holler to add a foreign mission component and give a tithe of 10% of whatever was raised. They both thought Fairfield would be the perfect recipient.

Holler wanted to make a difference for children. It was his dream to build an Institute for Child and Family Well-Being in South Carolina.

“I began to think about The United Methodist Church with our organizational structure and how it is sometimes underutilized,” Holler said. “I went to the bishop with the idea of trying to see if as a church we could really make a difference in the whole issue of child care.” 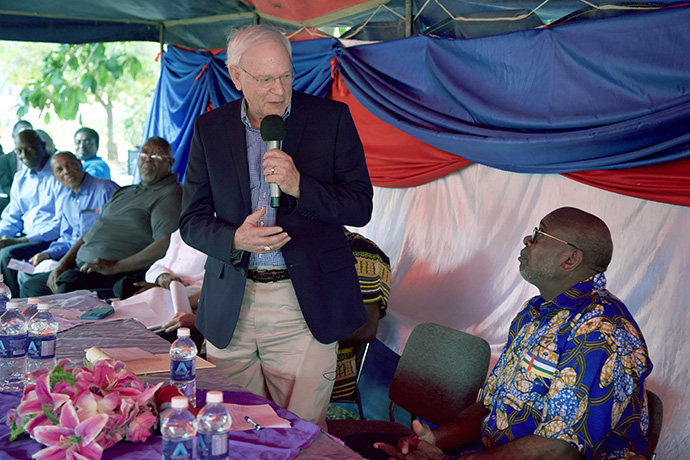 The Rev. John Holler (standing) speaks to Bishop L. Jonathan Holston about the connection and commitment they share with Fairfield Children’s Home. Holler led a campaign that raised $8 million for the South Carolina Epworth Children’s Home. He and Bishop Holston agreed to tithe 10 percent of that money to the United Methodist orphanage in Zimbabwe. Photo courtesy of the Africa University Public Affairs Office.

Holler’s goal was to raise $10 million. Two years into the campaign, the COVID-19 pandemic hit. They came up a little short of the goal, but through internet work and innovative ways, including vacation Bible school collections, they were able to raise $8 million. 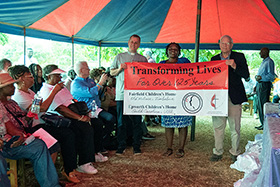 The Rev. Owen Ross, director of church development in the North Texas Conference, has a personal connection to the Fairfield Children’s Home.

As a seminary student, he spent a semester at Africa University. He was looking for a United Methodist school outside the U.S. because he felt called to be an international missionary ...

The money going to Fairfield will be used to support the children and the mission’s ministry. A scholarship fund to Africa University also will be established.

The money will go into an endowment fund, and the Fairfield Outreach and Sponsors Association  will vet projects.

“We are working toward scholarships for any of the children from Fairfield to attend Africa University,” Holler said. “In fact, one of the top graduates in the last graduating class at AU was a Fairfield child.”

During his 2001 visit, Holler was asked to preach at a rural church. It was a pivotal moment for him.

The church hadn’t had anyone serve communion to them in a long time, he said.

“As I served communion, I will never forget the people who came to receive the host,” Holler recalled. “There was a hunger.”

After communion, they gathered in a meadow and sang in English, “Jesus, Jesus, we love Jesus.”

“I knew in my heart we are one under God; we are all God’s children, and we are all on a journey toward holiness,” Holler told the group gathered under the tent on Oct. 21.

“I present this gift,” he added. “It is amazing to return to be with you to celebrate together in God’s miraculous world.”