The Rev. Angela Cooley Bulhof evacuated with her family to Houston ahead of Hurricane Laura, but word reached her quickly that her church, University United Methodist in Lake Charles, Louisiana, took a big hit from the powerful storm.

“One entire wall that faces the street basically collapsed,” said the pastor, who just began her appointment at the church on July 1. “There are chunks of roof on all the buildings that were completely torn off.”

A handful of other United Methodist church buildings in southwest Louisiana, including University United Methodist’s satellite campus, were damaged to varying degrees by Hurricane Laura.

“But the wind was not our friend,” she said in a conference video.

Hurricane Laura brought winds of up to 150 miles an hour as it made landfall along the Gulf Coast of southwest Louisiana and southeast Texas early on Aug. 27. Laura, which moved north and then east as a tropical storm, is blamed for at least 11 deaths and has left hundreds of thousands of people without power.

Aerial photos confirmed the devastation in and around Lake Charles, including destroyed homes and businesses.

United Methodist clergy in that city and elsewhere in southwest Louisiana joined other residents in evacuating before the hurricane and were scrambling from afar to get reports on their churches and residences.

“It affects our sanctuary, our Sunday school rooms, our offices — everything,” she said. 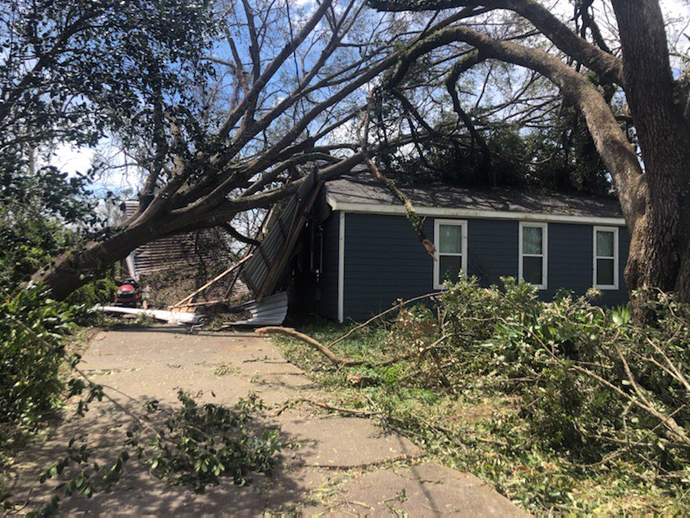 “You know how the (United Methodist) connection is so wonderful,” she said.

Two of the three buildings at Maplewood have what appear to be minor problems, but the fellowship hall, which includes the church offices, fared badly.

“The walls are down,” said Goff, whose parsonage came through OK. “It could have been a (hurricane-related) tornado, or just the winds from Laura.”

The Rev. Mel Yorks leads three United Methodist churches in southwest Louisiana. He was relieved to see photos showing that one of them, Wakefield United Methodist Church in Cameron, was surrounded by water but still standing.

“When I saw the pictures, I had tears of joy almost,” said Yorks, noting that the church had lost sanctuaries to previous hurricanes.

The pastor reported that another of his churches, Sweetlake United Methodist near Bell City, had extensive damage to the roof of its gym. Yorks, who evacuated to Vicksburg, Mississippi, was still awaiting word on his third church, Grand Chenier United Methodist. 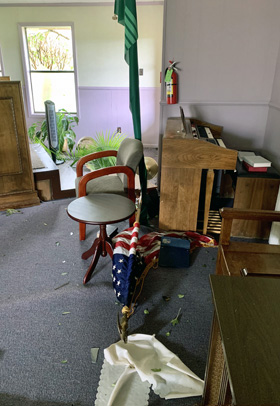 “One of our side doors was blown open from the storm. Most of our windows — they’re broken,” she said. “Lots of roof damage, and we did get lots of rain and wind throughout the building.”

She promised that the church, despite its property issues, would be there for the community.

“We all have lots of hope and we know that God is with us, and we’ll get through this together as we have through other storms,” Sirman said.

The Texas Conference had braced for widespread damage east of Houston, but while many were without power there, the situation did not seem dire.

“Our area wasn’t hit as hard as anticipated,” said the Rev. Romonica Malone-Wardley, superintendent of the Southeast District, in an article posted to the Texas Conference website.

Assessment continues across much of the Louisiana Conference, especially in southwest Louisiana, where downed trees and power lines made getting into some neighbors difficult, said the Rev. Todd Rossnagel, the conference’s director of communications.

Debris-clearing and other relief efforts by United Methodists need to hold off for now, said the Rev. Elaine Burleigh, who directs the conference’s office of missional engagement and outreach.

“We just need to standby. It is not safe,” she said, but stressed that early response teams will be needed soon.

Bulhof promised that Hurricane Laura’s property damage would not alter University United Methodist Church’s mission to love its neighbors, including special care for the vulnerable.

The hurricane will present new opportunities for extending that mission, she said.

“Amazing how God builds on your experiences to increase your potential for ministry wherever you find yourself.” 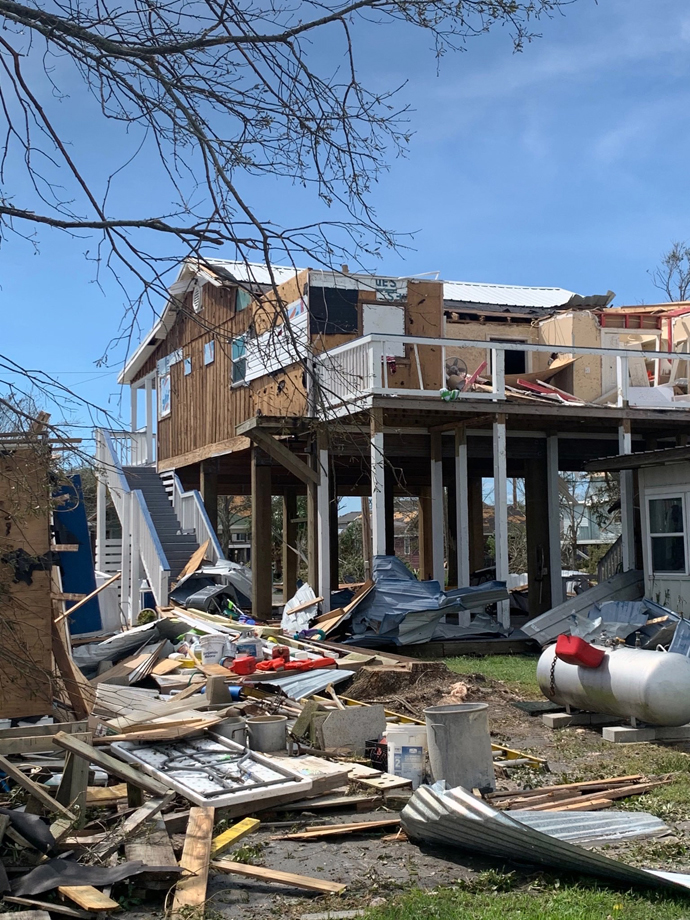 The year 2020 was an eventful and difficult one for the church. Photographers from UM News documented a year in the life of United Methodism worldwide.
Local Church

Pastors already dealing with a stressful 2020 now must lead United Methodists through the seasons of Advent and Christmas as the coronavirus pandemic rages.
Mission and Ministry