A simple but game-changing shift in perspective is putting DeAmon Harges at the vanguard of helping neighborhoods rejuvenate.

Harges, founder of The Learning Tree and faculty member of the Asset-Based Community Development Institute at DePaul University, is one of five Tom Locke Innovative Leader Award winners. The award, given for the first time this year by the Wesleyan Investive, goes to people “who exemplify innovative spiritual leadership and missionally driven entrepreneurship.”

“It is Tom’s vision that inspired us to create this award in his honor,” said Roland Fernandes, board chair of Wesleyan Investive and chief executive of the United Methodist Board of Global Ministries and United Methodist Committee on Relief.

“He saw a critical need for courageous, creative leadership in the church and responded with a spirit of entrepreneurship and financial resources to help identify and embolden those making a difference in our communities.”

Each winner will receive $50,000 and be invited to participate in a group project with the other winners.

Harges is a member and former staffer of Broadway United Methodist Church in Indianapolis. His strides in reviving the church’s northwest Indianapolis neighborhood have been featured on “CBS Sunday Morning,” the documentary film “The Antidote” and the book “Having Nothing, Possessing Everything: Finding Abundant Communities in Unexpected Places,” authored by the Rev. Mike Mather, Harges’ former pastor.

Harges believes in unleashing the talents already embedded in a community rather than identifying needs and trying to fulfill them.

Harges’ tactics are simple. He spends a lot of time walking the neighborhood, knocking on doors, introducing himself and drawing out people about their talents and ambitions.

“I would walk the block and talk to people,” Harges said. “Instead of doing programs, we want to figure out how to invest in what people are already doing.”

Among his neighborhood discoveries are a man who teaches chess to interested children on his porch, and gang members with skills in poetry, music and mechanics.

At the end of a week of visiting, Harges asks one of his new acquaintances to host a gathering. Church members as well as city officials working on neighborhood development are invited, but asked not to speak.

“(Neighbors) would talk to each other about what they cared about, what they were doing,” Mather said. “(Harges) told me, ‘I don’t care what somebody has an opinion about. … I want to know what someone cares deeply enough about that they will actually get off their couch and do it.’”

Learning Tree projects in Indianapolis include the Bikers Boyz and Girlz Bike Shop, which teaches children bike repair and communications and marketing skills as they run a bike shop that fixes donated bikes for people who need them. Another project resulted in 45 local artists being paid $150 apiece to create artworks on found and donated doors. The “Perception: What’s Behind the Door?” exhibit was held in 2016. 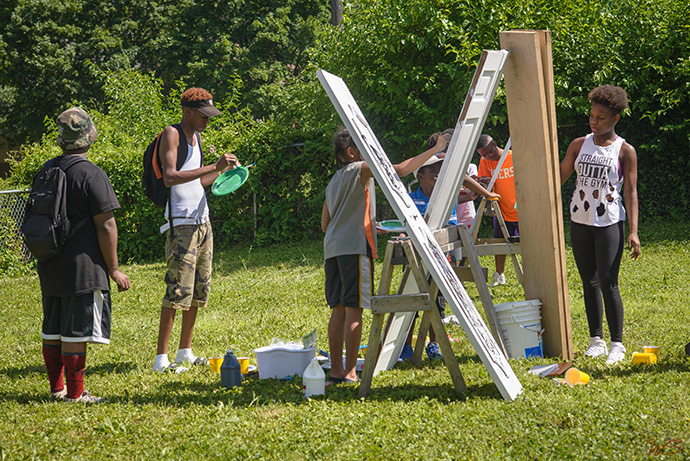 Indianapolis artists paint doors for use in a 2016 exhibit, “Perception: What’s Behind the Door?” The exhibit was an outreach by The Learning Tree, which was founded by DeAmon Harges to use assets within a community to improve neighborhoods. Photo by WildStyle DaProducer.
“He is changing the way philanthropy is happening in Indianapolis,” said Mather, now pastor of First United Methodist Church of Boulder in Colorado. “He knows his neighbors and he knows they are not people who are needy, but needed.”

Born in South Bend, Indiana, Harges, 47, learned about neighborhood organizing from his grandfather, who planted a tree in the housing project where they lived. Through the years, the tree became a gathering place for celebrations and adjudicating disputes.

“My grandad was kind of an organizer and artisan and very talented,” Harges said. “He and his neighbors would often share stories with one another. Guess who else got to listen to those stories? His grandkids. We started organizing before I knew what an organizer was.”

There were four other Tom Locke Innovative Leader Award winners this year. They are attorney Emmanuel Andre, the founder of the Northside Transformative Law Center in Chicago; the Rev. Jennifer Bailey, founder and executive director of Faith Matters Network in Nashville, Tenn.; the Rev. Leroy Barber, co-founder and president of The Voices Project and director of innovation for an engaged church in the Pacific Northwest Conference of The United Methodist Church; and the Rev. Matt Russell, co-founder and co-managing director of Project Curate and executive pastor at Chapelwood United Methodist Church in Houston.

“We are thrilled to honor these remarkable individuals who show us a new imagination for what the church can do for the sake of the world,” Fernandes said.

Sheila Carrasco, the actress who plays Flower on the CBS sitcom "Ghosts" and the daughter of a retired pastor, grew up in front of an audience.
Faith Stories

Rukudzo J. Murapa is being remembered for his vision, networking and leadership, including helping to establish the United Methodist university’s Institute of Peace, Leadership and Governance.
Faith Stories

United Methodist Jake Sherrell has brought to Christ hundreds who have sat in his barber chair. Now, his community is surrounding him in love as he battles stage 4 cancer.