Many in the Korean Caucus specifically raised concerns about the One Church Plan, one of the proposals heading to the special General Conference on Feb. 23-26.

“If the One Church Plan passes, KUMC would have difficulty in accepting an LGBT bishop assigned to the Korean UMCs due to its cultural and moral traditions,” said the Rev. Paul Chang, executive director of the denomination’s Korean Ministry Plan. “The new definition of marriage also would be something KUMC would be struggling with in the future, too.”

However, he added if there is a guarantee that the One Church Plan would put the conflict to rest, he thinks Korean United Methodists could live with it.

According the 2015 journal, the total attendance of Sunday worship of 282 Korean American Methodist churches is 36,186. The total amount of apportionment paid by 222 Korean churches is $4,953,797.

A majority of bishops have recommended the plan to the special session of the denomination’s top lawmaking body. Bishops don’t have a vote at General Conference, but they preside over plenary sessions.

Under the plan, congregations decide whether to allow same-gender weddings, and conferences decide whether to ordain openly gay individuals. The plan adds protections for clergy and bishops who as a matter of conscience feel they can’t officiate at such unions or ordinations. But it also changes the denomination’s Social Principles to say marriage is a covenant that’s monogamous and “between two adults.”

The gathering on Dec. 3 at Calvary Korean United Methodist Church brought together five bishops and 25 other church leaders. The bishops include Korean leaders Bishops Hee-Soo Jung of the Wisconsin Conference, Jeremiah Park of the Susquehanna Conference and retired Bishop Young Jin Cho. Also on hand were Bishops Sally Dyck of the Northern Illinois Conference and John Schol of the Greater New Jersey Conference — areas with a substantial number of Korean United Methodists.

“It is very unusual for a Korean church to have five bishops at the same time. It is an honor and privilege for us,” said Rev. Sangwon Doh, senior pastor of the Calvary Korean United Methodist Church, as he welcomed the participants. The greeting was uplifting, but the meeting itself soon became very serious.

Jung encouraged all the participants to share their candid opinions.

“We (bishops) are here to serve you,” he said. “We will share your concerns and opinions to the Council of Bishops. We honor that you have demonstrated your love and passion for church as the leaders of the Korean United Methodist Church.”

Bishop Sally Dyck said she wanted to hear the concerns of Korean United Methodists at the meeting. Photo by Thomas Kim, UMNS.
Dyck added that the Council of Bishops recognizes Korean church struggles.

“Whether we are progressive or conservative, we are all United Methodists,” she said. “I hope it is time we can share our opinions and thoughts so that we can move forward. We bishops will share your concerns and pay attention to the struggles of the Korean churches.”

Schol extolled what he sees as the advantages of the One Church Plan, which he said allows churches to be practical and adaptable to their different ministry situations around the globe. He added that the plan “gives us an opportunity for all of us to move on and to focus on the mission and on the other greater ministries.”

But many of the bishops’ listeners were skeptical.

The Rev. Kwangtae Kim from the Chicago First Korean United Methodist Church asked the bishops whether they are aware of the impact of the One Church Plan upon Korean churches. “Those who want to break a church are using the issue of homosexuality as a good justification for their behaviors,” he said. “The crises that the Korean Presbyterian Church (USA) have now could happen to the KUMC.”

The Rev. Chongho Kim (no relation) of Flushing First United Methodist Church in Queens, New York, said in his New York Conference he urged the bishops to present a way to protect ethnic minority churches, including the Korean churches.

He added that Korean churches know their own weaknesses. 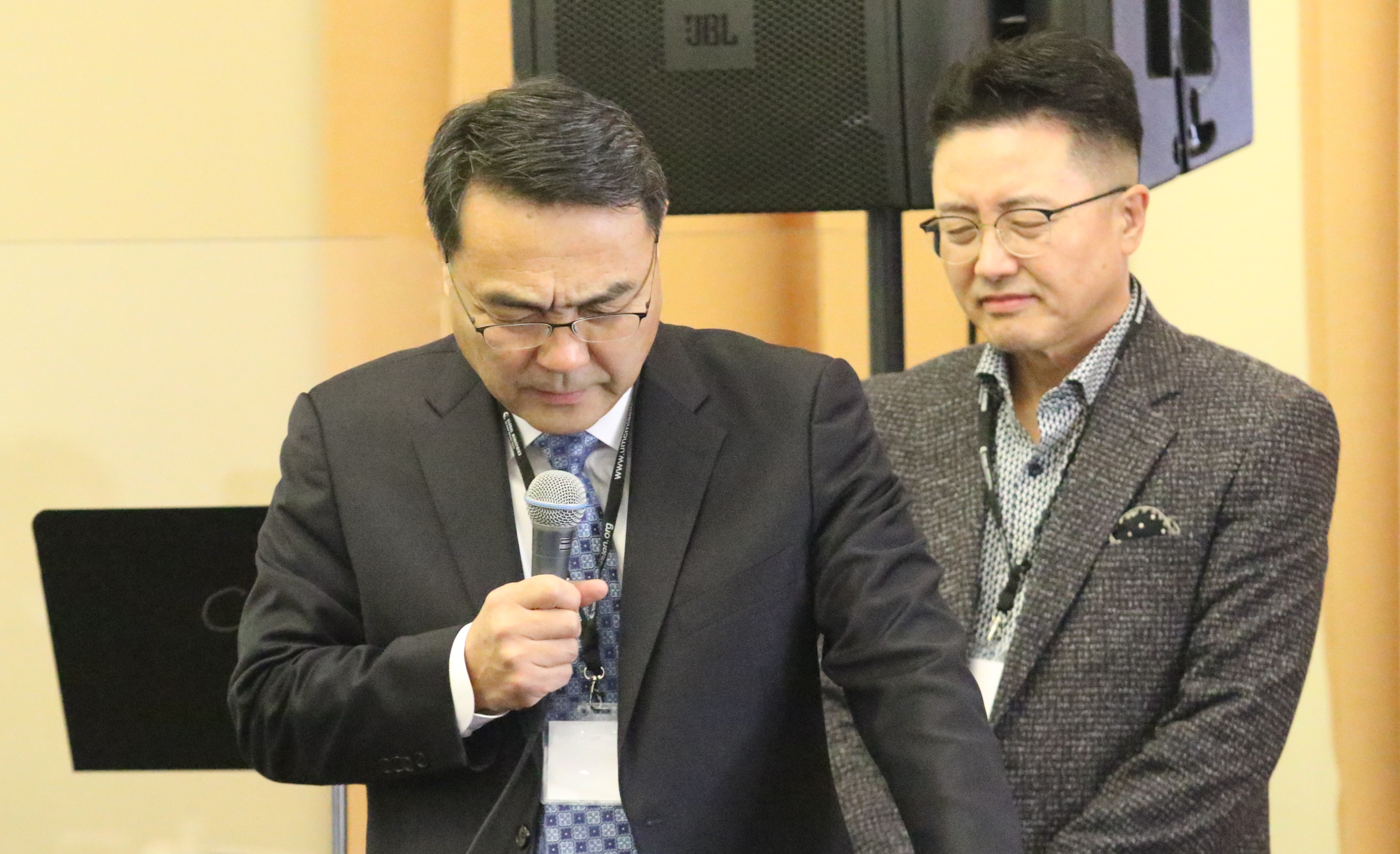 The Rev. Chongho Kim (left) prayed for the meeting. Standing by him is the Rev. Paul Chang, the executive director of the Korean Ministry Plan. Photo by Thomas Kim, UMNS.

Park made an appeal to the unity of the church. “We are partners in ministry,” the bishop said. “We need to understand each other through dialogue. I hope that we can discern God’s plan for our future together. The One Church Plan allows us to agree to disagree. Among bishops we have different understandings of human sexuality, but we respect each other and these understandings. That is why we support the One Church Plan.”

One of the main concerns that the Korean participants expressed was whether the bishops truly understand the reality they face. Korean United Methodists serve Korean immigrants whose understanding of family value is different than most of U.S. society.

The Rev. Timothy Ahn of Arcola United Methodist Church in Paramus, New Jersey, asked for wisdom and advice from the bishops. “If the One Church Plan is passed, then how should I explain the meaning of a marriage to my congregants as a local church pastor?” he asked.

The Rev. T.J. Kim of Salem Korean United Methodist Church in Schaumburg, Illinois, shared his concern about the plan.

“The diversity of our denomination is very important and precious,” he said. “However, for Korean churches this is an issue of survival. Protecting the family is one of the core values that the Korean church has. Maintaining this value is an important ministry. The One Church Plan can eliminate the foundation on which Korean churches stand.”

Cho, the retired bishop, responded to Ahn’s and Kim’s concerns.

“I know that the Korean pastors have compassion for and commitment to their churches,” he said. “They want to protect the churches, not just the pastors.

“Even if the One Church Plan is passed, the Korean churches and Korean pastors can keep their integrity of their faith concerning their understanding of marriage and they can choose not to officiate weddings they don’t want to officiate,” he said.

At the conclusion of the meeting, Bishops Jung and Schol agreed to share with the full Council of Bishops the concerns they heard. The bishops also said they would consider creating a task force that would focus on the challenges and realities of Korean United Methodist congregations.

“In the past, I felt that they did not want to listen to our voices,” he said. “Now I feel that they are willing to listen to us and share our concerns and worries. I appreciate and value that. Together we have taken one step forward.”

Park said the future of the denomination is uncertain and that has everyone on edge.

“The Apostle Paul said that we have ‘fighting without and fear within’ in 2 Corinthians 7:5. That means we have to fight the spiritual fight with outside enemies and overcome our fears inside our hearts,” the bishop said. “The Korean community is going through a difficult time and feels that a storm is imminent. However, we have to face it and go through it. There is no other way. When we keep our faith in our Lord who is with our community, we can participate in the future has planned for us.”

Thomas Kim is the Korean/Asian News Director of the UMNS. If you want to contact him, please call 615-742-5470 or email him [email protected].