When the Rev. Eliud Kahanya Karanja graduated from Bethany Christian College in Mathare, Kenya, in 1994, he knew God was calling him to ministry.

Believing that the traditional pastorate wasn’t the path for him at the time, Karanja established a United Methodist chaplaincy ministry for law-enforcement personnel at the General Service Unit headquarters.

He worked as a general service officer before his transfer to the Kenya Airport Police Unit in Embakasi, where he served until retiring in December. His work has led to a new chapel and school serving airport police and their families.

Reflecting on his journey, Karanja said chaplaincy opened unique opportunities to minister to a wide range of people, many of whom might not walk through the doors of a church.

“With a keen attention to police and community culture,” he said, “I’ve been the balancer, providing support for police officers and civilians in need.”

Offering prayers while visiting with sick or injured members of the police department at their home or in the hospital has been part of Karanja’s role as a chaplain. He highlighted the importance of offering comfort, counsel and referrals to those in need.

For police, spiritual support is vital to combating stress, he said.

Karanja strived to change the culture in positive ways through ministries with law-enforcement agencies.

In 2000, he gathered resources and established the first chaplaincy unit. He went on to help build a church for uniformed officers at the general headquarters, followed by a chapel at the Kenya Airport Police Unit. He received funding support from partners at Bethany United Methodist Church in South Korea.

Karanja said during his tenure, he was able to train 20 police officers to help in counseling work.

“I retired at the age of 60, having walked faithfully with God and diligently served police and the church,” he said.

Law-enforcement personnel have experienced social and spiritual transformation, thanks to Karanja's 25 years of service as a police chaplain, Mukii said.

In addition to starting the chaplaincy unit, Karanja founded the Kenya Airport Police Unit Chapel Academy, a Christian-Muslim school, in 2021.

The school was started to fill a need for the 600 police officers and their families whose only educational option was an overcrowded primary school a few miles away. The airport-police chapel congregation and well-wishers funded the academy.

The school encourages Christian and Muslim students to learn and work together. 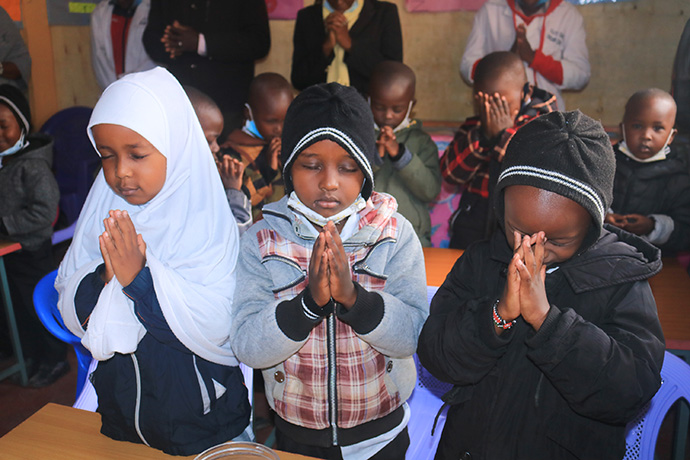 Christian and Muslim students pray together at the Kenya Airport Police Unit Chapel Academy, which was founded by United Methodist Chaplain Eliud Karanja in 2021. Photo by Gad Maiga, UM News.

Head teacher Janet Rotich said the church school values diversity among its employees and believes that learning from diversity leads to successful coexistence.

Karanja agreed. “It's not just about meeting the demands of Christians and Muslims. It's also about providing better education … that transcends the constraints of religious beliefs and social constructions to foster peace and promote education for all.”

Raphael Kurgat, a chaplain of the Airport Police Unit, an officer and a theological student at Wesleyan United Methodist Training College, described his predecessor as a creatively positioned minister who had a big heart for transforming the police service in Kenya.

“In Kenya's police service and The United Methodist Church,” he said, “Rev. Karanja has been supportive in advocating for education and resources to improve skills and build and sustain successful chaplaincy programs.”

“(He) has been able to send some of his police officers for training at our pastors’ school. More officers will be joining Wesleyan United Methodist Training College to pursue theological studies in April,” he said.

Karanja would like to see more uniformed forces and additional missions in Kenya, particularly in Garissa, Odongo said.

“The district has set aside land for the construction of a police officer counseling center under Chaplain Karanja's patronage,” Odongo said. “All that remains is for God to provide resources and partners to help Rev. Karanja realize his dream.”