The Methodist Church of Mexico is responding to a surge in immigrants from Ukraine who have been displaced by war and are seeking asylum in the United States.

The war with Russia has forced more than 10 million Ukrainians to flee their homes, according to the United Nations. The city of Tijuana, at the northwestern border of Mexico, has become the gateway to the United States for many Ukrainian refugees, since the immigration process at the U.S. consulates in Europe takes a long time, according to media reports.

The Methodist Church of Mexico A.R., together with other churches, civil organizations and the support of the United Methodist Committee on Relief, is providing food and other aid to many of the refugee applicants.

“In the 'John 6:35 dining room,’ around 800 meals a day (400 breakfasts and 400 dinners) are being prepared for distribution, along with other food provided by other churches and organizations, in one of the city's shelters where 1,800 people are currently being housed,” said Bishop Felipe Ruiz, episcopal leader of the Methodist Church of Mexico’s Northwest Annual Conference (CANO).

Initially, the Methodist church building was being used for meal preparation, but Ruiz said it was also opened to house about 25 people, mostly pregnant women and children, when a nearby shelter became overwhelmed.

The building also is being used temporarily to provide logistical support to the group of volunteers who are serving the refugees. Doctors, nurses, drivers and others can rest and get cleaned up after working for long periods. 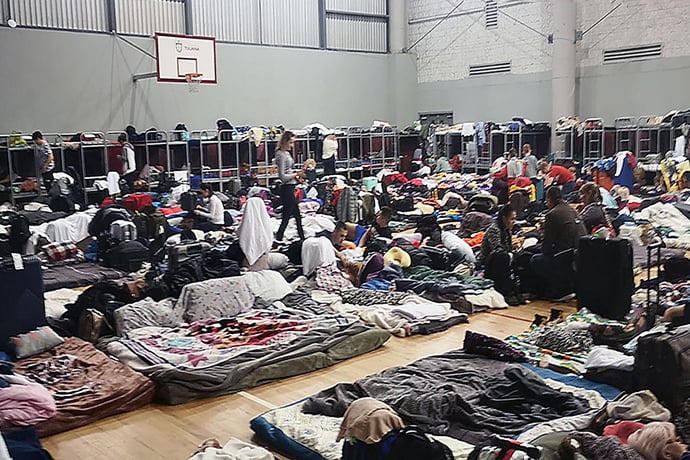 City officials in Tijuana, Mexico, have arranged the use of a covered gym near the San Ysidro border point for helping more than 1,800 people from Ukraine. The refugees are housed there temporarily as they await processing of their applications to enter the United States. The procedures are taking three to four days. Photo courtesy of Bishop Felipe Ruiz, Methodist Church of Mexico A.R.

The “Methodist dining room,” as the building is known locally, was partially closed due to the restrictions around the COVID-19 pandemic between 2020 and 2021. Earlier this year, it was refurbished to serve immigrant families arriving from all over the world, with the intention of crossing into the United States.

“Until now, we have been working with CANO's own resources, but recently, we have received the approval of an economic aid from UMCOR, in the amount of $10,000, which will serve to increase our service capacity, taking into account (the) constant increase in families arriving,” Ruiz explained.

As part of the service to people who arrive affected by the consequences of the war, volunteer groups have been focusing on providing medical, spiritual and emotional care. The Mexican Methodist Church has been supporting this effort. 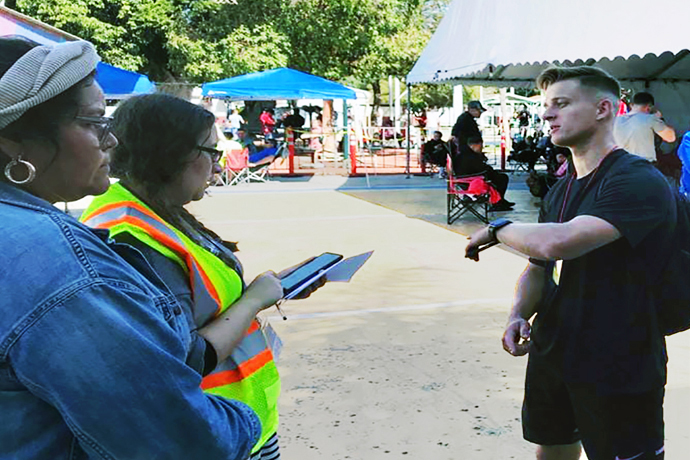 Refugees from Ukraine are received by groups of volunteers sponsored by Slavic churches and civil organizations in the United States. The volunteers help the asylum seekers go through the immigration procedures to enter the U.S. Photo courtesy of Bishop Felipe Ruiz, Methodist Church of Mexico A.R.

“The majority arrive very sad for everything they have gone through, but here they feel peace,” Ruiz said. “However, the language barrier makes it very difficult for us to communicate. I think that on average, out of every hundred people who arrive, hardly one speaks English, and when our people, who only speak Spanish, want to interact with them, we have to do a double translation to be able to communicate.

“However, we try to pray with them and have put up a banner in Ukrainian that says, ‘Let us pray for you,’ so that we can offer them spiritual support in the face of so many difficulties they have suffered,” he said.

News media have been reporting the arrival of asylum seekers and refugees on this side of the border, from Cancun and Mexico City, whose airports receive flights from Europe.

Upon arrival in Mexico, refugees are greeted by groups of volunteers, sponsored by Slavic churches on the U.S. West Coast, who direct them to local flights that take them to the city of Tijuana. There they receive shelter and food and are taken to the San Ysidro border point in San Diego, California, for entry processing.

“Refugees spend between three and four days waiting before receiving their appointment to cross the border, and once they manage to cross, they are connected with family or friends who reside in the United States or are also supported by churches and civil organizations to facilitate their settlement in different localities,” Bishop Ruiz said.

U.S. President Joe Biden has stated that the U.S. will receive a total of 100,000 Ukrainian refugees in 2022, according to media reports.

“I understand that only the immigration service in this border area with San Diego is the one that is processing the applications of the Ukrainian families, that there is no other point of the border that is doing it so far,” the bishop said. “Although there are currently no other groups arriving on this side of the border, we know that this dynamic can change quickly, and that is worrying people in the city, since we could easily be overwhelmed in our capacities.”

Vasquez is director of United Methodist News for the Hispanic-Latino audience. He can be reached at (615) 742-5155 or by email at [email protected]. To read more United Methodist news, ideas and inspiration for ministry, subscribe free to UMCOMtigo.