Methodists’ zeal for planting churches across the U.S. became so well known that, by the late 1800s, their exploits had inspired a folk hymn.

Denominational leaders insist that today’s United Methodists can rekindle that passion for reaching new people wherever they live. New Church Starts (Path 1), the part of Discipleship Ministries that works with United Methodist conferences to plant churches, has set a goal of starting a new faith community a day in the U.S.

The Rev. Bener Baysa Agtarap, the head of Path 1, said the rise of the religiously unaffiliated creates fertile ground for United Methodists “to reclaim their legacy as innovators and pathfinders for Christ.”

However, even as United Methodists reinvigorate that pioneering spirit of yore, Path 1 leaders acknowledge that the new churches of today look different from their forebears on the American frontier.

Instead of meeting under the brush arbor, budding faith communities these days often gather in a coffeehouse or at a person’s home. Instead of hymn sings and preaching, their central activities are often small-group study and engagement in mission. 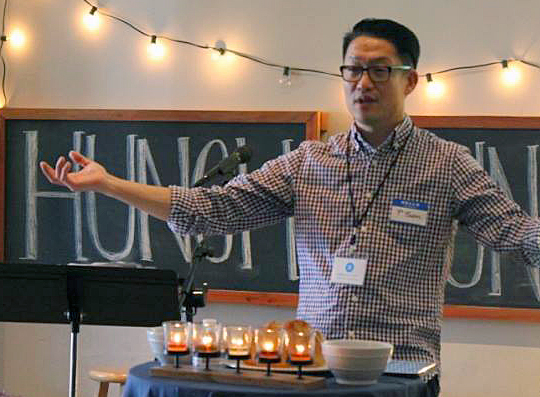 The Oakland mother church determined that simply adding an English-language service was not enough, so it asked the Rev. Samuel S. Yun to start the East Bay Small Group.

Yun said the group had two goals: To reach next-generation Korean-Americans and other young adults unlikely to attend a traditional Asian-American church, and to develop the lay leadership necessary for the group to become self-sustaining.

“The invitation for people to join this group was simple,” Yun said. “We asked potential members — mostly those who were unchurched or de-churched — if they could resonate with the ‘hunch’ that ‘life with God is better than life without God.’”

One of the group’s early events was a gathering at a bar that drew some 60 people. The group studied Scripture, engaged in various service projects and began having monthly worship services.

After much prayer and conversation, Yun and other East Bay group members officially launched Embrace Church in July 2015. The church’s name is a reference to Habakkuk, which means “embrace” in Hebrew. Yun, the new church’s lead pastor, took particular inspiration from Habakkuk 2:2: “Write a vision, and make it plain upon a tablet so that a runner can read it.”

Emily Fan, who had not grown up in any church, began attending the East Bay Small Group after learning it met in her apartment building. She wants Embrace to be known for the same kind of welcome she experienced.

Fan and other Embrace leaders said they never imagined starting a new church.

“We look at each other and realize five years ago, none of us was going to church regularly. We aspired to it, but we hadn’t found a church home,” said Fan, the chair of the church’s leadership council. “Now we are serving, and we couldn’t imagine our lives without it.”

New Church Starts (Path 1) categorizes new churches in three ways. Some of these groups will develop into full-fledged churches, while others remain outreach ministries of existing churches. Still others may exist for only a few years.

• Spiritual Neighborhood — Small groups and other forms of community where profession of faith in Christ is not necessary to belong but where United Methodists bear witness to Christ.

• Faith Communities — These could range from intentional discipleship groups to multifaceted bodies that worship God, serve neighbors, disciple members, and enjoy Christian fellowship. These include both nontraditional ministries and campuses of pre-existing chartered churches.

Today, the now multiethnic Embrace Church is reaching about 90 people and is still growing, especially with young families. It has a partnership with Covenant House California, which works to rescue homeless and trafficked teens, and holds weekly worship at Twin Towers United Methodist Church in Alameda, California.

Yun, whom members call P. Sam, projects the new congregation will become self-sustaining in its fourth year, and he already has plans to start working toward a second location in 2020. The East Bay Small Group still meets every other Thursday.

B.J. Kang, like Fan, did not regularly attend church while growing up. Now, he sees his discipleship maturing at Embrace.

“Embrace Church feels like a community that first loves God and loves each other,” said Kang, the church’s special projects chair. “It supports what I feel I was put on earth to fulfill — which is spreading God’s love to the world. I do this imperfectly every day, but I strive to keep on doing it with God’s presence within me.”

Farther up the West Coast, ConnexíonTacoma in Washington is another United Methodist community that is just getting started.

The Rev. Abigail Vizcarra Perez, the first Latina elder in the Pacific Northwest Conference, started Connexíon in October as a growing network of small groups.

Her idea for reaching new disciples is to combine a rather old concept, John Wesley’s band meetings, with a relatively new one, the women’s book group. The church’s name uses Wesley’s spelling of connection with an accent mark to indicate its multiethnic nature.

Vizcarra Perez uses as her text “Women Who Run with the Wolves” by Clarissa Pinkola-Estés, a book that invites women to reclaim their stories. Ultimately, she said the groups’ conversations all come back to the Bible and how its stories relate to the women’s lives.

“The strategies that I employ here are to build relationships first,” she said. “I ask them to bring their stories and bring them into conversation with Scripture. So women who tell me they are agnostic are asking me questions like, ‘Is there a Scripture on weaning babies?’”

Vizcarra Perez said she knows she is helping to nurture discipleship when one of the participants, tells her, “I feel both accountable and accepted in a way I never have before.” 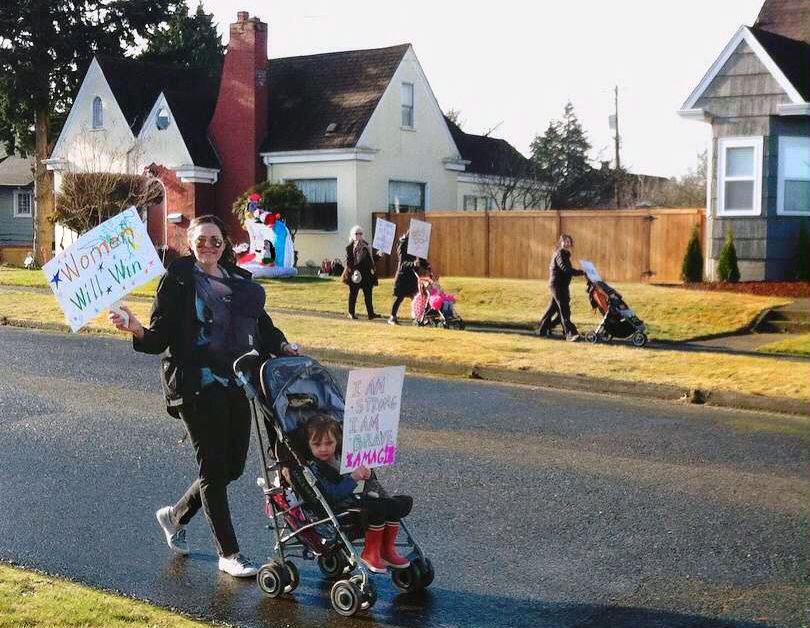 Women from ConnexíonTacoma, a new faith community in Tacoma, Washington, led by the Rev. Abigail Vizcarra Perez, decided to have a mini-march in their neighborhood for International Women’s Day on March 8. Photo courtesy of ConnexíonTacoma.

So far, she has started seven groups of about five each. Each group meets at least monthly in homes, restaurants or even the offices of nonprofits. The groups also regularly combine for shared events including picnics and service projects. Vizcarra Perez also meets with each member between meetings, which she sees as part of accountability.

Liz Hirschl has been involved with Connexíon since January and has attended Fircrest with her family for nearly as long. Before becoming part of the budding community, she said she was always uneasy inviting others to church.

“But with the Wolves groups, I’ve found that I am having such an amazing experience and it’s so life-giving that I want everyone I know to be part of it,” she said.

Agtarap believes with new faith communities that empower laity, the denomination can blaze a new trail among the unchurched.

“God is leading us to a place where we will rediscover the power that is within us,” he said. “I believe that the power that prompted John Wesley and his leaders to share the gospel of Jesus Christ is still very much in us.”