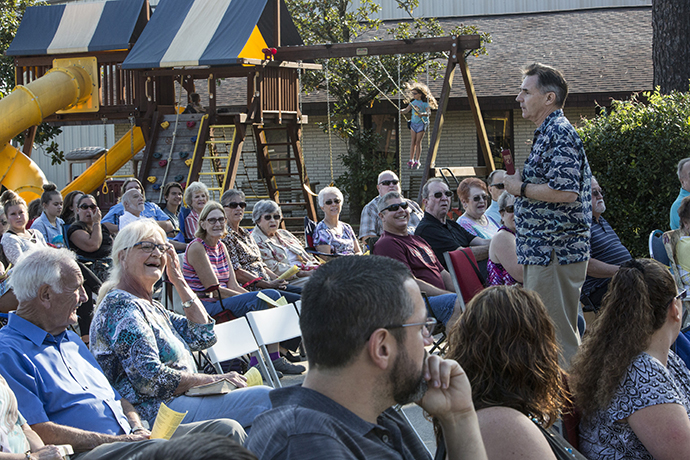 While children enjoy the playground, the adult congregation of Lake Houston United Methodist Church in Huffman, Texas, reacts to the message of the Sunday sermon by the Rev. Frank Coats.

For the second Sunday morning in a row, members of Lake Houston United Methodist Church set up folding chairs and held worship outside.

Flood damage from Hurricane Harvey has put their sanctuary out of commission for months. Some at the Sept. 10 service also lost their homes, including Christine and Gary Jordan.

“The worst part of this is seeing everything you ever had on the side of the road,” Gary Jordan said. 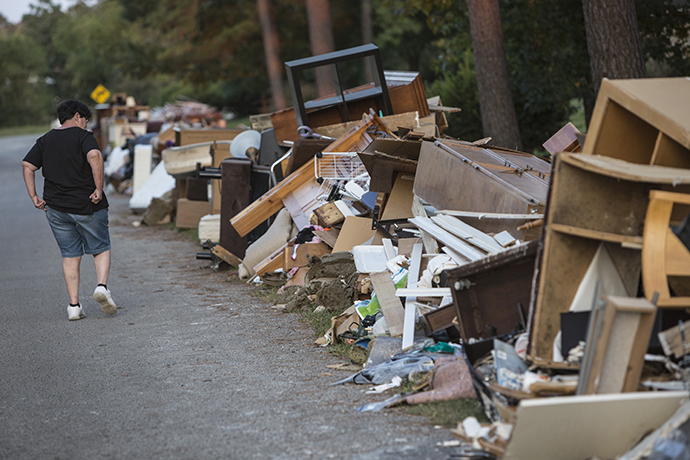 Sandy McCall looks through her furniture and flooded possessions on the street outside her home in Orange, Texas.

Flood-related woes abound across southeast Texas, and in the worst-hit areas, small mountain ranges of soggy insulation, carpeting and mementoes have formed street-side, near uninhabitable homes.

But at the outdoor service, when the Rev. Frank Coats asked church members to share any personal concerns, three people called out at once: “Florida!”

“Florida,” echoed Coats, Lake Houston United Methodist’s pastor. “I’m so proud of you for saying that.”

As Hurricane Irma bore down on Florida and Georgia, United Methodists who survived the ruinous rains that accompanied Hurricane Harvey late last month were worrying about and praying for their neighbors to the east. 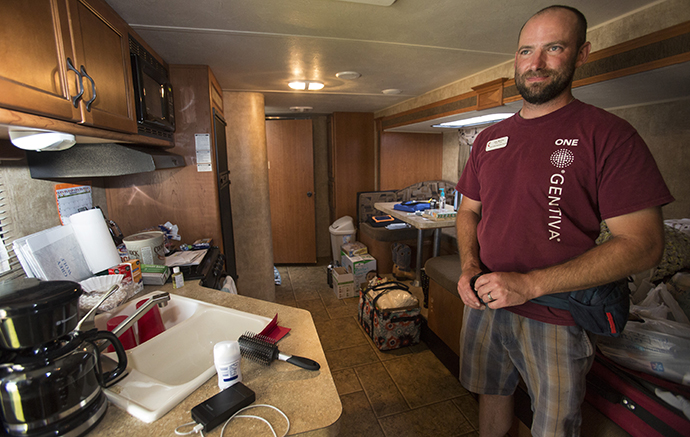 The Rev. John Mooney, pastor of First United Methodist Church in Vidor, Texas, is living with his wife and two young children in a donated camper. HIs home was damaged from flooding resulting from Hurricane Harvey.

Though they had one eye on the news, the Texans were also busy cleaning out homes and churches, and finding ways to serve their hard-hit communities. They’re witnesses, and perhaps role models, in what’s shaping up as an infamous hurricane season.

“You take a few deep breaths, you read some Scripture and you keep going,” said the Rev. Alicia Coltzer Besser, superintendent of the Texas Conference’s Southeast District.

Hurricane Harvey and its aftermath claimed more than 70 lives and damaged nearly 200,000 homes. The Texas Conference alone reports 75 churches with at least some damage.

Though Houston grabbed most of the media attention, some of the blue-collar towns in Besser’s district had, pound for pound, more devastation due to rains as heavy as 50 inches in 24 hours. 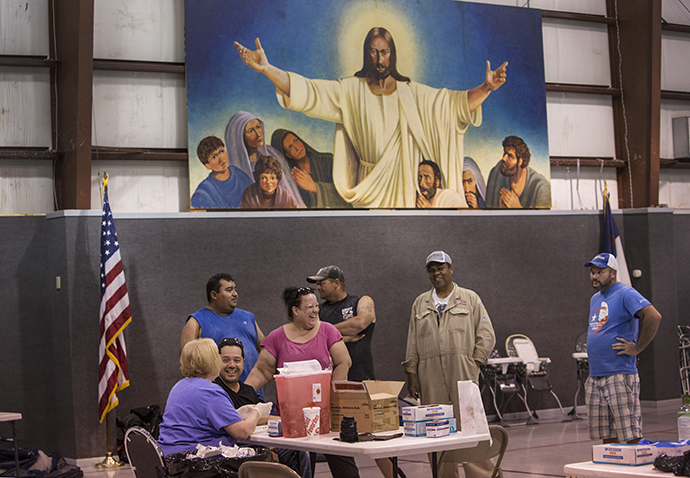 About 80 percent of the families at First United Methodist Church in Vidor, Texas, were forced from their homes. The pastor, the Rev. John Mooney, is living with his wife and two small children in a donated camper on the church parking lot because they too were flooded out.

But the Vidor church was where, on Sept. 9, people who had cut themselves busting out Sheetrock or pulling out carpet tacks could get a free tetanus shot. A steady stream of residents filed into the church’s gym to take advantage. 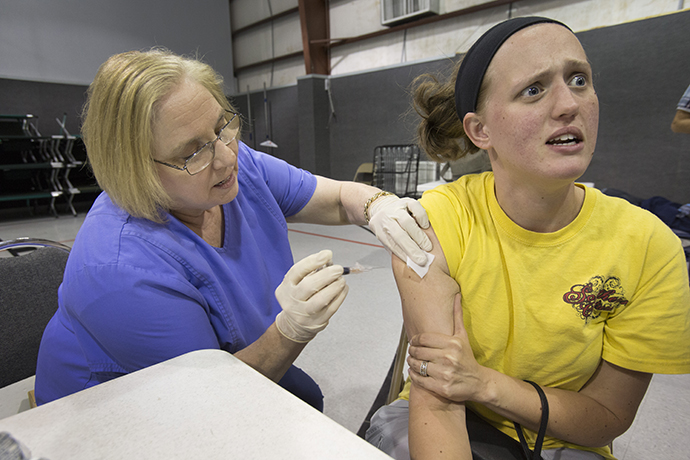 Krissah Dickerson grimaces after receiving a tetanus shot by nurse Ruth Hasson inside the gym at First United Methodist Church in Vidor, Texas.

During the worst of the flooding, on Aug. 29-30, First United Methodist of Vidor was a crucial overnight shelter, despite losing water and power and having a backed-up sewage system.

“We had people sleeping in the pews,” said Whitney Cappen, who does children’s ministry at the church and has been an ongoing flood-relief volunteer. “I’ve learned lessons from this. Those pews aren’t just made for us to sit in. They’re made for us to reach out and help our community.”

Though the church’s time as an overnight shelter for flood evacuees has ended, it’s preparing to turn its gym into a place where volunteer work crews can stay. 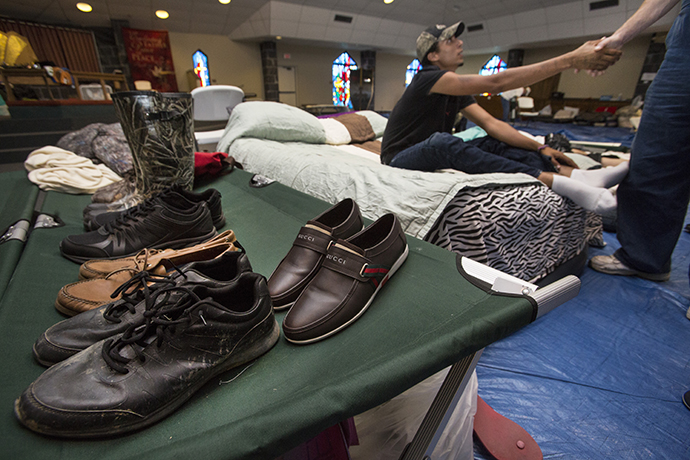 The gym at Woodcrest United Methodist Church in Lumberton, Texas, serves as a shelter to many including Stevon Ford (on cot) who is shaking the hand of Allen Smith. Smith, who was helping to run the shelter, has given Ford a job.

Woodcrest United Methodist in Lumberton, Texas, continued this past weekend to be a shelter for a couple of dozen people. The church housed 350 at one point, as well as pet dogs, cats, birds, ferrets and even a guinea pig and a fish.

The Rev. Charles Jordan, pastor, worked with leaders of other local churches in organizing to meet the sudden need. For those sleeping on cots, volunteers cooked meals, filled prescriptions, washed dirty laundry and walked the dogs.

It was like a cruise ship without the views, some said. James Powell, one of those still staying at the church Sept. 9, got emotional talking about the help he’d received from the ecumenical network. 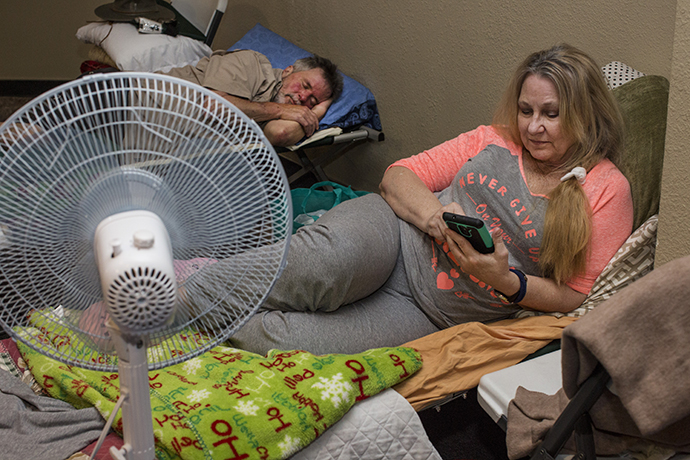 Donna Paulk and Marshall Paul lost their home and car in flooding from Hurricane Harvey. "What we have is left on the bed," she said. They were staying Sept. 9, 2017 at Woodcrest United Methodist Church in Lumberton, Texas.

“I didn’t know they had people like that in Lumberton,” he said.

At First United Methodist Church in Orange, a few miles away, the Rev. Keith Tilley was among those flooded out. He didn’t mince words.

“It looks like my house vomited on the front lawn,” he said. “And every house out here is like that.”

But Tilley was at his church, making sure a work crew from First United Methodist Church in Carthage, Texas, could get in to take showers and prepare for an overnight stay. 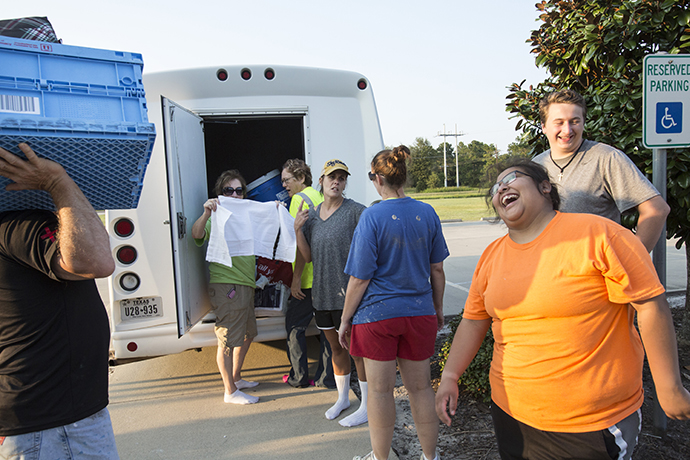 The work crew from First United Methodist Church in Carthage, Texas, rejoices at the end of a day mucking out homes damaged by flooding from Hurricane Harvey. In Orange, Texas.

The Carthage team showed up as the sun was setting, having spent most of the day cleaning out the ruined home of an elderly member of First United Methodist in Orange.

“It was hard, and it was hard emotionally,” said Tonia Crittenden, one of the Carthage volunteers. “You’re telling this sweet little lady, `You’ve got to throw this in the trash.’”

Everywhere in southeast Texas, there are stories of survival and endurance.

Mike Toups is the building supervisor at Wesley United Methodist Church in Beaumont, Texas, but he and his wife, Tammy, are living with their five dogs in the church’s Scouting building for the near future. 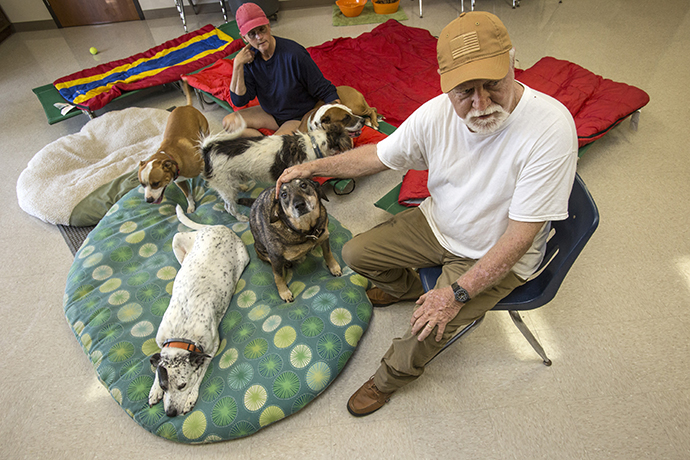 Mike Toups and his wife Tammy are living with their five dogs inside the scout ministry building at Wesley United Methodist Church in Beaumont, Texas. Toups is the building supervisor at Wesley UMC. They were flooded out by Hurricane Harvey.

With the floodwaters rising, they were evacuated from their home by game wardens in an airboat. They escaped with their clothes, their dogs and a 50-pound sack of dog food.

“Two horses we can’t find,” Mike Toups said. “By the time the game wardens got to us, (the water) was probably three foot and rising. So we were lucky to get out with the dogs.”

He’s still searching websites for any news of their horses.

Coats, the pastor, noted that a four-wheeler was brought in at one point to help pull out the recalcitrant carpeting. “Redneck American ingenuity,” he said.

“All gutted,” she said of her home. “The whole street is.”

But Burnett was smiling as she took her place with others gathering for Sunday worship Sept. 10 on the driveway at Lake Houston United Methodist. 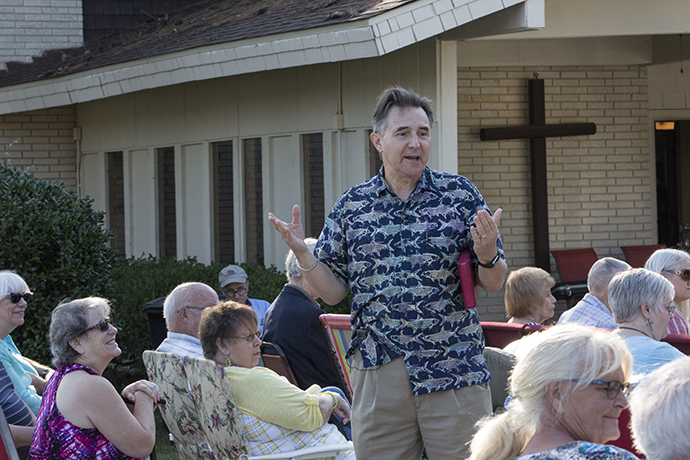 For those facing Hurricane Irma’s wrath, this Harvey evacuee would recommend resuming church life as soon as possible.

And it’s fine with her if it has to be outdoors.

“We need this,” she said, gesturing at small groups of her fellow church members exchanging handshakes and hugs in the bright sunshine. “We need the fellowship and the love of each other.”