In addition, the board of the General Council on Finance and Administration approved filing a formal complaint against Bishop Daniel Wandabula, who has led the East Africa Annual Conference since 2006. The complaint, to be filed with the Africa Central Conference College of Bishops, deals with concerns about his use and accountability of funds for various ministries in that conference.

Other responses - including possible legal actions in secular court - are also under consideration by the board, said agency officials and a statement from the finance agency.

Finance agency officials could not say how much money its recommendation would affect.

"The actions of GCFA reflect our fiduciary responsibility for the whole church as we work to protect, defend and strengthen the trust our United Methodist people have in their churches, conferences, agencies and projects," said Indiana Area Bishop Michael Coyner, president of the finance agency's board, in the statement. "We take these actions in concert with other entities within the church to assure the funds are being used for the work for which they were intended."

Wandabula was not available for comment on the finance agency's actions.

The General Council on Finance and Administration's board made its decision after the report of its Committee on Audit and Review. That committee is charged with making sure that general church funds, including money given to Advance specials, has gone to the purposes donors intend. It does not monitor the use of gifts from individual local churches and annual conferences.

The committee, after consultation with representatives of the United Methodist Board of Global Ministries, told the finance agency that the East Africa Annual Conference has failed for several years to provide complete and accurate financial audits of general church funds it has received.

Until the East Africa Annual Conference can provide satisfactory explanations of how those funds were spent, funding from general church entities will not be forwarded to that annual conference or related organizations, the finance agency's statement said.

The agency encouraged annual conferences and local churches to review their own funding of East Africa projects.

"What we're saying is that unless (local churches and annual conferences) are confident that their accountability are such that they can guarantee their donors that the money is going for the purpose it was intended that they should consider suspending funding," said John Goolsbey, executive of administration at the General Council on Finance and Administration.

Goolsbey said the finance agency's recommendation will not affect disbursements from the denomination's Episcopal Fund that support Wandabula. Even if a bishop is under suspension, the Book of Discipline - the denomination's law book - requires that a bishop's salary, housing and benefits continue.

The East Africa Annual Conference includes Kenya, Rwanda, Uganda and the new nation of South Sudan. The conference office is in Kampala, Uganda.

Moses Kumar, top executive and treasurer of the General Council on Finance and Administration, said his agency's actions "are being taken to help all of our members feel confident that faithful ministries will continue to be funded properly and can be supported by the church." 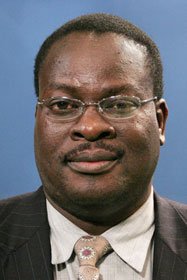 The General Council on Finance and Administration's decision comes after multiple concerns were raised across the denomination about the East Africa Annual Conference's use of funds. Many questions specifically center on the administration of Wandabula.

After three audits in 18 months, the United Methodist Board of Global Ministries on Aug. 8 accepted a recommendation from its audit committee to suspend all funds indefinitely to the East Africa Annual Conference.

The denomination's mission agency had previously suspended funds in September 2011 to the Humble School in Mukono, Uganda, after a routine four-day, on-site audit of funds managed by the East Africa Conference.

Besides Humble School, other projects reviewed and affected by this year's suspension of funds include the Hope for Africa Children's Choir Music Academy in Mukono, Namunkanaga HIV/AIDS and Malaria Awareness, Trinity United Methodist Church in Wanyange, United Methodist Women Center in Jinja, and the United Methodist Empowerment Center of Jinja.

The amount on hold for East Africa Annual Conference Advance projects on Sept. 27 was $73,541.43, according to figures from Melissa Hinnen, public information officer for the mission agency.

Most other general agencies don't have any immediate projects scheduled in the East Africa Annual Conference.

The United Methodist Board of Pension and Health Benefits officials said the next payment to retired clergy and surviving spouses in East Africa is not scheduled until 2013. The pension payments are part of the Central Conference Pension Initiative.

"The administration systems we are putting in place are designed to assure pension payments made are delivered and received. If we have any indication that payments are not being received, we will discontinue them the following quarter," said a statement from Barbara Boigegrain, the pension board's top executive.

The Holston Annual Conference, which includes churches in parts of Tennessee, Georgia and Virginia, plans to continue its financial support in the Yei District of South Sudan.

The Holston Conference is working very closely with the United Methodist Board of Global Ministries to ensure that its funds are sent to South Sudan in a way that is totally accountable to Holston, to the mission agency, and to the people of South Sudan, said the Rev. Carol Wilson, the conference's director of communications.

The Judicial Council, the denomination's top court, will take up other questions about the East Africa Annual Conference's use of funds when it next meets Oct. 24-27 in the Chicago area.

The Western Pennsylvania Annual Conference has asked the Judicial Council to rule whether funds given to the East Africa Conference were used in accordance with the intent of the donors as required by Paragraph 258.4 of the 2008 Book of Discipline.

The Western Pennsylvania Conference's former Pittsburgh East District raised about $90,000 for churches, wells and maize mills in Uganda before the district was dissolved in 2005. One church building was never completed, the maize mill did not work and the well was dug where there was no United Methodist presence, district leaders charge.

The district sent the funds directly to Wandabula, a district superintendent and project coordinator at the time.

Wandabula earlier told UMNS that $86,888 from the East Pittsburgh District and $19,994 from the Africa Church Growth and Development funds were used to "pay part of the Namboole United Methodist Church land, pay attorney expenses, pay the land surveyors, land transfer fees, seal, architectural drawings, a maize mill and bore hole. All these investments were accounted for."

The Western Pennsylvania Conference also has asked the Judicial Council to rule on whether money members had designated for Isaac Sebit, a pastor in South Sudan, ever reached the pastor.

The petition also requests the Judicial Council to review whether a complaint against Wandabula filed by Nancy Denardo, a member of the Western Pennsylvania Conference, was properly handled.

*Information for this story is based on a General Council on Finance and Administration news release by Sharon Dean and reporting by the Rev. J. Richard Peck and Heather Hahn.