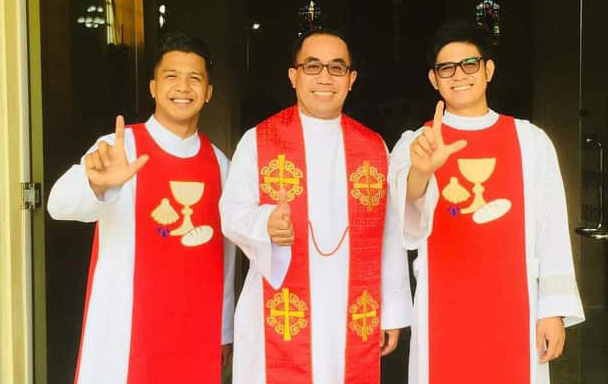 The Rev. Joel Q. Bengbeng (center), superintendent of the Ilocos South District in the Northwest Philippines, is among the United Methodist pastors from the Baguio Episcopal Area who say they have experienced harassment due to their social justice work. Photo courtesy of the Rev. Hinivuu Pecaat.
Amid a strict home quarantine on the island of Luzon, two United Methodist pastors said they fear for their safety because of harassment and intimidation — and because of COVID-19.

The Rev. Joel Q. Bengbeng, superintendent of the Ilocos South District in the Northwest Philippines, part of the Baguio Episcopal Area, said officers of the Philippine Army have harassed him due to his social justice work.

“I fear for my life. I persist not to go out by myself. I seek help from a relative to accompany me or drive for me,” Bengbeng said.

Candon City, where Bengbeng lives, is under the enhanced community quarantine due to the spread of COVID-19. As of April 2, there were more than 2,600 confirmed cases in the country and 96 deaths.

Bengbeng told UM News by phone that he has found the combination of threats to be a heavy predicament.

“I have two unseen viruses, COVID-19 and the threat to me, which really makes me feel unsafe.”

On March 4, military men visited Bengbeng at Candon City United Methodist Church in Ilocos Sur, accusing him of a connection with the Communist Party of the Philippines-New People's Army, the reformed communist party.

The men told Bengbeng that a document was recovered that listed him as a staff member for the Ilocos Human Rights Alliance, which the officers claim is connected to the New People’s Army.

Bengbeng denies the allegation. He said that his advocacy for social justice is part of his work as a pastor and his mandate as United Methodist clergy.

The men urged Bengbeng to sign a document surrendering, which he refused to do.

“I regard this intimidation as an attack not only against me but The United Methodist Church as well. It is meant to silence the prophetic voice of the church, to distract us from discharging our sacred duty to uphold justice, especially in these trying times,” he said.

Bengbeng said he suspects the surveillance might be due to his participation in a movement opposing the construction of a dam in Salcedo, Ilocos Sur, which threatened to displace families.

In March, officers returned several times. They asked Asuit to sign a prepared statement and take an oath of allegiance while the military took his picture, according to a statement issued by The Philippines Board of Church and Society.

“It is indeed a predicament. My biggest fear is not only for myself but for my family and my church members as well who are so anxious of the military presence,” Asuit said.

“As a pastor, it is the mandate of my faith to decry any form of violence; it is biblical and it is stipulated in the Social Principles of The United Methodist Church. It is not only for me, but for all.”

The Rev. Genesis Antonio, a United Methodist clergy who serves as chairperson of the Philippines Board of Church and Society, spoke out against the harassment.

“Intimidation as an attempt to hinder God's work is of the devil (and) it should be denounced,” he said.

“I enjoin all United Methodists to be one in denouncing all forces that impede God's mission here on earth. We should be one in pursuing God's agenda and united despite all the challenges, including harassment and intimidation,” Antonio said.

The Philippines Board of Church and Society’s March 16 statement condemned the treatment of United Methodist clergy.

“We strongly protest, reject and condemn the surveillance and intimidation of pastors, as well as having our church members sign, under duress, ‘confessions’ as members of armed dissident groups, and ‘surrendering’ to government forces.”

Bengbeng said the visits from the military men, which began in May of 2019, made him uncomfortable and caused anxiety for his elderly mother who lives with him.

“Every time they came to visit, they would always take pictures with me,” he said.

He asked them not to return, reiterating that the claims against him were false and unfounded.

Since that first visit, he said he has feared for his safety. The military visits also are affecting his work as a pastor and district superintendent.

Bishop Ciriaco Q. Francisco of the Manila Area, who is assigned to the Church and Society board, also decried the harassment.

“We denounce intimidation and harassment against people who are advocating for human rights and justice because they are peaceful, loving people and law-abiding citizens. If they support those who are crying for justice, that is part of our prophetic ministry.”

The bishop had a message for the clergy.

“Don't be afraid; be strong. Let us stand together in solidarity with the poor, the needy and the oppressed.”

The Rev. Aniceto R. Villalon Jr., executive director of the Philippines Board of Church and Society, prayed for strength for those being treated unfairly.

“I can only pray that God may please give them the strength that they will need to be able to come out victorious from the most difficult ordeal they go through,” he said.

Bishop Pedro M. Torio Jr. of the Baguio Episcopal Area explained why there is a need to denounce intimidation and harassment.

“Our Christian engagement in the face of socio-economic, political and even religious injustice is our concrete experience of God's incarnating love in the midst of suffering and pain. This is our calling.”

Torio conveyed his message to all clergy who put their lives at risk for prophetic ministries.

“Courage of conviction must be demonstrated with courtesy of communication. Fearless views must be rooted in balanced perspectives. We must articulate our Christian position while reaching out to minister to all people, including and especially those whose actions we question. And while being one-sided prevents us from willingly listening to those we disagree with, let us remind ourselves that it is always our responsibility to hear them out and listen to their side of the story.”

Despite his fears, Bengbeng said he and his peers will continue to live out their vows.

“We will continue to follow the way of Christ who challenged the powerful. We will persist to live out our baptismal vows to reject evil and injustice. We will strive to fulfill our ordination vows to seek justice, peace and freedom for all people.”

In addition to ongoing collection of donated items, individuals and local churches have readied spaces to house refugees for either short- or long-term recovery.
Mission and Ministry