Faith leaders and others at the 24th International AIDS Conference heard that newer global health threats like COVID-19 and monkeypox are hampering progress toward improving HIV prevention, treatment and care.

The conference was held July 29-Aug. 2 in Montreal.

Recent decades saw slow, steady progress at reducing the number of persons infected with HIV and AIDS-related deaths. Then came COVID and monkeypox.

“Let’s be clear: We have lost ground over the past two years and the most vulnerable have been hit hardest,” declared Dr. Adeeba Kamarulzaman, International AIDS Society past president.

Dr. Anthony Fauci, chief medical adviser to President Joe Biden, warned that with three simultaneous global health emergencies, this is “not the moment to call a time-out” in the struggle against HIV.

UNAIDS Executive Director Winnie Byanyima reported that there were 650,000 AIDS-related deaths last year — a life lost every minute despite effective HIV treatment and tools to prevent, detect and treat infections.

Fauci and speakers from the Centers for Disease Control predicted an increase of monkeypox, and already there are thousands of new infections in Europe and North America among gay and bisexual men. Immune-compromised persons living with HIV are especially vulnerable to infectious diseases like COVID, monkeypox, tuberculosis and malaria.

At the conference, speaker after speaker expressed concern that conservative political and religious groups would stigmatize monkeypox in ways experienced by gay men at the start of the HIV pandemic. Faith leaders and others were challenged to not respond with hysteria or homophobia.

UNAIDS labeled its report “In Danger” and claimed that “insufficient investment and action are putting us all in danger.” About 1.5 million new HIV infections occurred in 2021— over 1 million more than the global target.

Especially alarming is that an adolescent girl or young woman acquires HIV every two minutes. During the first two years of COVID, millions of girls were not in school. Girls suffered increased sexual violence, and experienced higher rates of pregnancy.

The number of people getting life-saving HIV treatment grew more slowly in recent years, and millions of the infected still cannot get life-saving medicine. Only 52% of children living with HIV have access to such medicine, compared to 76% of adults. This gap has increased rather than narrowed during the COVID crisis.

COVID disrupted anti-retroviral testing and treatment, as lockdowns prohibited distribution of medicine and kept people from checking their HIV status. Global food shortages have kept some people from taking their medicine, because they know from experience that side effects are worse on an empty stomach.

Conference attendees learned that increased attention is being given to the role of stigma in limiting scientific progress toward ending AIDS. This was a topic when leaders of UNAIDS, the Global Fund and President’s Emergency Plan for AIDS Relief (PEPFAR) spoke to a hybrid interfaith pre-conference of over 400 people, July 27-28.

The speakers emphasized that faith communities can help reduce individual and structural stigma that inhibits people from getting tested and treated. One way: sermons advocating testing.

While top officials of AIDS organizations are calling for greater faith community involvement, it is unclear that faith communities are interested. Few official representatives from U.S. mainline denominations attended the Montreal event.

Representatives of UNAIDS and PEPFAR stressed that their organizations want to hear from and respond to faith communities engaged in AIDS ministries because many people worldwide are deeply involved in their churches, mosques, synagogues and temples.

In response, a young adult from Zimbabwe pleaded that government organizations implement their words into programs. “Young people in my country,” he said, “are tied to our faith communities from the day we are baptized until we die. If my people are to be healthy, educating our leaders about infectious pandemics is imperative.” 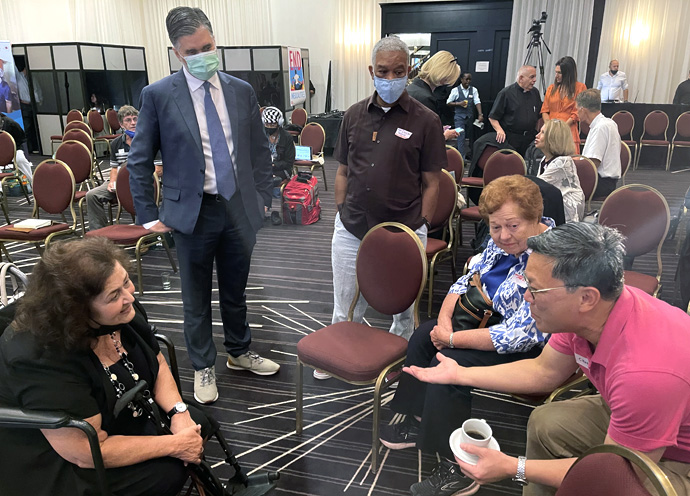 The mother of legendary AIDS activist Ryan White, Jeanne White-Ginder (left), converses with Dr. Bonnie J. Messer (second from right) and Chin Keong Tan at the 24th International AIDS Conference, July 29-Aug. 2 in Montreal. Scientific and medical personnel at the event expressed alarm about the negative impact new global health threats like COVID-19 and monkeypox are having on the progress toward improving HIV prevention, treatment and care. Photo by Don Messer.

A special guest at the interfaith conference was Jeanne White-Ginder, an AIDS activist from Leesburg, Florida. She recounted the struggles she and her son Ryan White faced in the 1980s, when he was kept out of a Kokomo, Indiana, school because as a hemophiliac he received a contaminated blood product. She recalled the lack of acceptance they found in their local United Methodist church at that time. “I lost faith in my church,” she noted, “but never my belief in God and Jesus Christ.”

She reported how she was befriended by British singer Elton John and came to know love and acceptance from the marginalized gay and lesbian community.

A Roman Catholic priest, Maryknoll Father Richard Bauer of the George Washington University Institute for Spirituality & Health, noted that Ryan White’s dream echoes in the heart of every other child in the world: “I want to go to school.”

Yet even today, HIV-positive children face obstacles and adolescents living with HIV face a higher propensity toward suicide. Bauer stressed “stigma and discrimination are sins; Christians are called to embrace a theology of hospitality.”

Valeria Rachinska of 100% Life, Kyiv, Ukraine, pleaded with the interfaith group for spiritual and financial support of the estimated 250,000 persons living with HIV in her country. 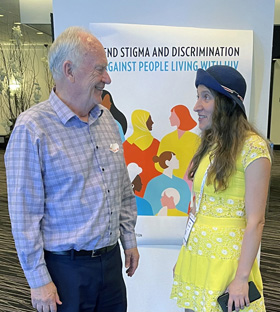 Illustrative is Anastasia, a 29-year-old woman diagnosed with HIV just two weeks before the Russians invaded. She escaped from her hometown and hid in a basement in another village for 10 days, but she had only three days of anti-retroviral medicine. From a temporary shelter in Vinnytsia, she anxiously commented that, “I don’t know what will kill me first: HIV or bombs.”

Despite the many dangers outlined, hope continues to prevail that AIDS could be ended by 2030 if stigma was overcome and science was observed. Five signs of medical progress were highlighted.

First, when properly treated with anti-retroviral medicine, persons cannot transmit HIV to others. Fauci emphasized the U=U campaign, since persons can achieve and maintain an undetectable viral load, thereby not sexually infecting others. Tested and treated persons effectively curtail the spread of HIV and AIDS.

Second, last year 5.5 million children were born free of HIV, because they and their HIV-positive mothers were given proper treatment and medication. Vertical transmission from mother to child could be eliminated.

Third, while neither cure nor vaccine exists for HIV, treatments and vaccines are available for monkeypox and COVID-19. But inequity of distribution hinders progress.

Fourth, new prevention possibilities exist with the wider global distribution of a daily oral medication known as PrEP (pre-exposure prophylaxis). Popular brand medications like Truvada or Descovy nearly eliminate HIV transmission from an infected partner. On the immediate horizon is the possibility that cabotegravir (CAB-LA), injected once every two months, could eliminate these pills and possibly be more effective.

Fifth, effective home testing for HIV at an affordable cost of only one dollar means people may feel safer in getting a diagnosis without community stigma.

Apathy toward HIV persists, however, in church and society, prompting Francesca Merico, former coordinator of the World Council of Churches’ Ecumenical Advocacy Alliance, to remind the interfaith gathering: “We may be tired of the virus, but the virus is not tired of us.”

Messer is executive director of the Center for Health and Hope, Centennial, Colorado, and serves as secretary of the United Methodist Global AIDS Committee.