The Nyadire Social Committee distributes food to families at The United Methodist Church’s Nyadire Mission in Mutoko, Zimbabwe. The Nyadire Connection, an all-volunteer group founded by individuals from a network of United Methodist churches in Pittsburgh, raised more than $25,000 for food relief at the mission. Photo by Kudzai Chingwe, UM News.
United Methodists in Zimbabwe and the U.S., with support from the Zimbabwe Council of Churches, are helping protect frontline workers at church mission hospitals and providing food for those struggling during the pandemic.

Tinashe Gumbo, the council’s ecumenical coordinator for COVID-19 response, said the group is committed to supporting its member churches by protecting and motivating front-line workers. The council includes 26 Protestant denominations and 10 affiliate members.

“It is my belief that the donation will go a long way in adding value to the fight against COVID-19 and in protecting the front-line health workers who are at high risk of contracting the disease.”

“We did not have adequate PPEs at a time when close surveillance was needed the most due to the spike of COVID-19 positive cases, which is currently taking place,” he said.

There have been 574 confirmed cases and seven deaths in Zimbabwe, according to Johns Hopkins University data.

“We were desperately in need of most of the personal protective equipment, especially sanitizers and gowns to prevent cross-infection,” Sunguro said. “Most of our departments had run short of these, posing a lot of risk to our front-line health workers.”

She said it was the hospital’s first PPE donation and much needed because of the large area the mission hospital serves. Musona’s district also collected money to purchase protective gear, including hand sanitizer, spray bottles and reusable masks.

“We are yet to deliver them to the Ministry of Health and Child Care for distribution in Mutasa and Nyanga District hospitals and clinics,” Musona said. “I greatly appreciate every effort done by individuals or organizations, because every donation is big enough to make a difference.”

“With this donation, the church remains visible in these dark times,” he said.

Health care providers at The United Methodist Church’s Dindi Clinic also were putting their lives on the line without proper protective gear, said Belinda Mashoko, sister in charge for the clinic in the Murehwa Uzumba Maramba Pfungwe District.

She said Dindi was operating without sanitizers, infrared thermometers, eye shields and gowns.

“Using digital thermometers was very risky to us,” she said, adding that every clinic is supposed to have at least six infrared thermometers, but the clinic only has two. “We greatly appreciate the donation, because half a loaf is better than nothing. Saving lives when you are protected and know that you have protected the next person (is a relief).” 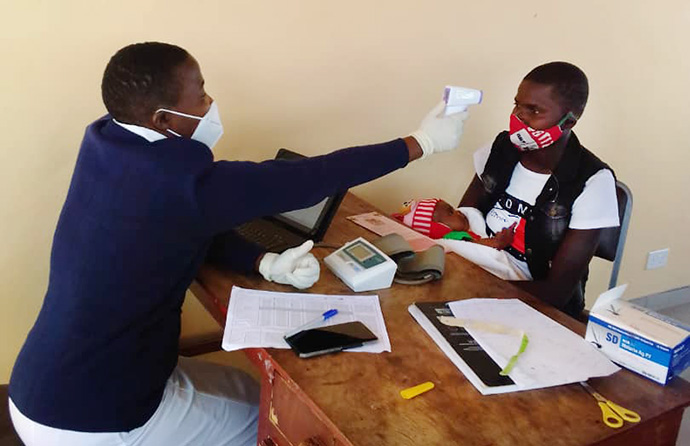 Belinda Mashoko, sister in charge at United Methodist Dindi Clinic, scans Benhilda Pfupa's forehead with an infrared thermometer at the mission hospital in Uzumba Maramba Pfungwe, Zimbabwe. The no-touch thermometers were part of a donation from the Zimbabwe Council of Churches, an ecumenical group that includes The United Methodist Church. Photo by Kudzai Chingwe, UM News.
While the hospital at Nyadire Mission benefitted from the PPE donation, the mission’s residents received food aid from The Nyadire Connection, an all-volunteer group founded by individuals from a network of United Methodist churches in Pittsburgh.

“After we received messages about a combination of stressors, including the drought and poor harvests, food shortages and increasing concerns over hunger, the dire economic situation and the lockdown — which created a very difficult situation for many — we made an appeal for food donations,” said Drew Harvey, chairperson for The Nyadire Connection.

He worked with Emmanuel Chiimba, administrator for Nyadire Home of Hope Orphanage, to help establish the Nyadire Social Committee, which facilitated the process of sourcing and distributing food to more than 300 families in June, Harvey said.

“The response to our appeal was amazing and inspiring. Within a few days, we received well over $10,000, which we sent to Nyadire,” Harvey said.

Since then, they have received an additional $15,000, he said, which will provide food support through mid-August.

“Although our funds are limited, we recognize that hunger will not go away in August and TNC is prayerfully considering what continuing support might be possible,” Harvey said.

“We have received messages of appreciation and heartfelt thanks and we are aware that God’s hand has definitely been at work with this task.”

The economic impact of the pandemic has been severe, particularly in poor nations like Zimbabwe, where the unemployment rate is estimated at more than 90%. According to the World Food Program, more than half the population, 7.7 million people, are food insecure.

“This help came at the right moment as it will go a long way in alleviating the food crisis, which some of our people in the mission were facing,” he said. “The assistance … reached every resident in Nyadire Mission.”

The Nyadire Connection expects more than 400 families — including pastors from the Mutoki-Mudzi District and staff members from the rural health clinics — to receive food aid in July.

The Rev. Lancelot Mukundu, mission station chairperson and a beneficiary, said the community has had limited resources due to the national lockdown. He said children at the Home of Hope Orphanage also received support.

“On behalf of all beneficiaries, I can say we received this aid with great appreciation,” he said.

Seniors are making strides into the computer age at a north Nashville church, thanks to classes made possible by a grant from United Methodist Discipleship Ministries.
Local Church

Today, some 2,000 community members, including 500 pupils at Moheto Primary School, benefit from a borehole project in rural Kenya.
Social Concerns