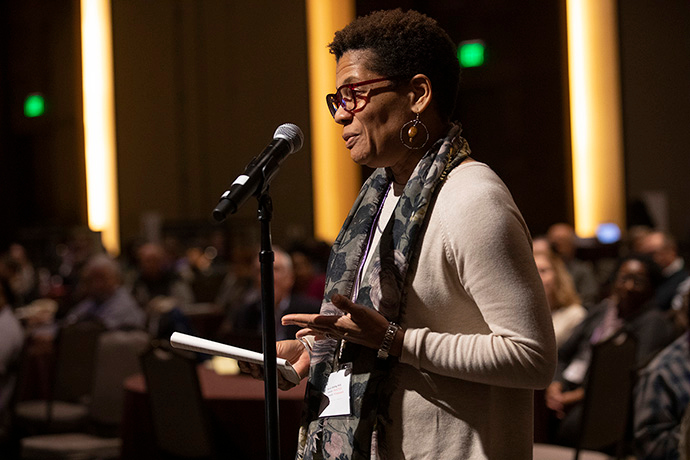 The Rev. Autura Eason-Williams addresses the 2020 Pre-General Conference Briefing in Nashville, Tenn. Eason-Williams, a district superintendent in what is now the Tennessee-Western Kentucky Conference, was killed July 18 afternoon in an apparent carjacking. File photo by Kathleen Barry, UM News.

Many are feeling shock and grief after the Rev. Autura Eason-Williams, a United Methodist district superintendent, was shot and killed in an apparent carjacking.

Memphis, Tennessee, police responded to gunfire the afternoon of July 18 and found Eason-Williams shot outside her home. She was pronounced deceased at the hospital. The police have since charged a 15-year-old boy with murder in the fatal shooting and a 16-year-old boy with theft.

Eason-Williams, 52, was a beloved leader in the legacy Memphis Conference and what is now the Tennessee-Western Kentucky Conference. She also was the wife of Darrell Eason-Williams and mother to four children: Ayanna, John, Terence and Gwendolyn.

More than 200 people gathered for a quickly organized evening prayer service July 18 at Colonial Park United Methodist Church in Memphis to mourn Eason-Williams and give thanks for her Christian witness and friendship.

“Autura’s faith was exuberant,” said the Rev. Cynthia Davis, her longtime friend who recently retired as a district superintendent in the Tennessee-Western Kentucky Conference.

“She wanted to know who you were and something about your story. She preached and she prayed hard, passionately and without reservation. She wanted everyone to have a relationship with Jesus, and she didn’t leave you where she found you if you didn’t.”

The Rev. Sky McCracken said Eason-Williams loved people, encouraged young people in ministry and “had an infectious laugh that all could hear.”

“Her hugs were generous, as was her love,” said McCracken, senior pastor of First United Methodist Church in Jackson, Tennessee. “She ended her emails with, ‘In the Grip of God’s Grace!’ — and anyone who saw her could see that and believe it.”

“Autura was uniquely gifted for mission and ministry,” the bishop wrote in his blog. “She navigated a cross-racial appointment as an early pioneer in that work in the legacy Memphis Conference.”

Her home conference also recognized her gifts. The Memphis Conference previously had elected her as its lead delegate to the now-postponed General Conference, the denomination’s top lawmaking assembly, and endorsed her as a candidate for bishop.

Eason-Williams recently had withdrawn her candidacy to focus on her ministry as district superintendent.

McAlilly said in his blog post that she was in the process of becoming one of the conference’s most gifted district superintendents and was tackling some of The United Methodist Church’s most difficult challenges.

Eason-Williams led the conference’s Signposts Seminars, which aim to address systemic racism, and led the conference’s work in the #BeUMC Campaign, an effort to highlight the positive aspects of The United Methodist Church as the denomination is dealing with theological divides and seeing rising church disaffiliations.

In an email exchange, Hurd said Eason-Williams wrote that she found the message of #BeUMC in the authentic stories of transition and transformation she heard during the Tennessee-Western Kentucky Annual Conference session in June.

“I thought, ‘This is what it means to BeUMC’ without ever saying BeUMC!’” Eason-Williams said in her email.

“It is something that God does in us while we daily choose to live faithfully in connection and in unity with one another and the Holy Spirit, while we wrestle with even the hard choices and the things that didn't go as planned and the unplanned things that bore fruit we could have never planned for!”

She previously served appointments at the Memphis congregations of Centenary and Calvary Longview. She also served on the conference staff. Immediately prior to her appointment as district superintendent, she was pastor of Capleville United Methodist Church, a multi-ethnic congregation in Southeast Memphis.

She served many years with Methodist Le Bonheur Healthcare as a member of the hospital system’s Faith and Health Committee. She was on the planning committees that created My Sister’s Keeper, an outreach that addresses health disparities of African American women, and the Congregational Health Network, an ecumenical network of 600 churches that also address health disparities.

Within The United Methodist Church, she also joined efforts to work toward a denomination that embraces and fully includes all people.

Eason-Williams was active in Black Methodists for Church Renewal, which seeks to raise up leaders to advocate for Black people in The United Methodist Church.

"She was not only a faithful member of BMCR but also served in several leadership positions," said Glenese Scales of the group's Tennessee-Western Kentucky Conference caucus. "Her dedication and hard work will always be an inspiration to us."

Reconciling Ministries Network, an advocacy group that works for LGBTQ equality in the life of the church, joined in mourning Eason-Williams’ death.

“Autura was a fearless, bold leader in the church and a strong LGBTQ+ ally,” Reconciling Ministries Network said on its Facebook page. “Where others alluded to their support, Autura clearly affirmed LGBTQ+ people and the need to remove The UMC’s discriminatory policies.”

The Rev. M. Douglas Meeks, an emeritus professor of Wesleyan Studies at Vanderbilt University in Nashville, had been among those who championed Eason-Williams’ candidacy to be elected bishop.

He said her tragic death is a profound loss not only for family and friends but also for the entire United Methodist Church.

“She carried her amazing gifts with humble self-confidence and surpassing excellence in the offices to which she was called: pastor, district superintendent, candidate for bishop, evangelist, scholar of the Gospel and fellow disciple,” Meeks said.

“What struck us all was her unfailing courage to stand up with Jesus against the causes of poverty and violence. That she was struck down by God-forsaken violence must cause us to struggle against the hatred that threatens all human beings in our society.”

This is the second killing of a United Methodist clergywoman in recent months.

In May, the Rev. Marita Y. Harrell, 57-year-old pastor of Connections at Metropolitan United Methodist Church in Atlanta, was stabbed to death by a man she apparently was trying to counsel. Police in Georgia’s DeKalb County charged 27-year-old Christopher Griggs with murder and arson.

For the group Black Women Clergy of The UMC, the recent loss of two African American women church leaders to violence has been particularly heartbreaking.

"As women we are often bombarded with issues that impact our safety as we carry out the tasks of ministry, but that does not deter us from trying to be faithful to the call that Christ has placed on our lives," said the Rev. Yvette Massey, the group's president and a leader in the North Georgia Conference.

"As the theme of our upcoming annual meeting states, we are 'Brave Enough' to face the dangers even as we stand up against violence to body and spirit that besets us in this society even in the 21st century. We lament the loss of our sisters to that violence and pray that their death will help spur all of us Christians to continue the fight against violence in all its forms, and to stand up for freedom and justice that is the foundation of the peace that we need in society and in the world."

Many United Methodists across the United States are mourning these leaders and hoping to follow their example in ministry.

“We are better for having known you and we will do our best to carry on your legacy,” he said.

McAlilly shared a similar sentiment in his blog.

“Autura, we will miss your laugh, your leadership, your love, your faithfulness, and your generous spirit,” the bishop wrote. “You modeled for us the words of Micah: ‘and what does the LORD require of you but to do justice, and to love kindness, and to walk humbly with your God?’"

Hahn is assistant news editor for UM News. Sam Hodges, a UM News writer based in Dallas, contributed to the report. Contact them at (615) 742-5470 or [email protected].To read more United Methodist news, subscribe to the free Daily or Friday Digests.